Longtime readers will know that aircraft wargame rules are an area of wargaming which I generally dislike. Or rather: I love air combat, and 1/600 models are both affordable and fun to paint, but the rules suck.  My run down of the various rules (in 2015) was negative.  I don't think the rules have evolved since the 1970s, and most seem fundamentally flawed. I have lots of lovely plane models but no desire to use them on the table.

I created a manifesto of key things my ideal aerial rules would contain, and looked at activation mechanics. I then kinda left it there, as (like usual) I dallied with other projects.  But I'd still love to get my aircraft minis on the table.... 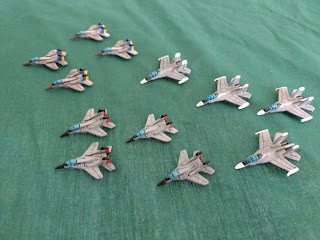 I really like my 1:600 jets. Easy to paint, and they look good at tabletop distances. I admit I secretly like the Su-27/MiG-29 over Western designs.

I revisited the topic last year, making a few points:
*rules are too complex, more accounting than playing. Why am I writing down "orders" for a fast paced dogfights with actions that last seconds?
*the 3D environment seems to necessitate complexity/aka energy management etc
*reusing tired old mechanics from 1970s where other genres have innovated/aka clunky mechanics
*tendency to rivet counting and excessive detail
*rules tend to be more suited to 1v1 duels than a wargame, aka one player flies one plane.
*wrong "command level" i.e. should you be controlling the exact throttle settings and maneuvers for each plane, if you command more than one..

The article wondered what we could abstract, yet maintain the essence of dogfight combat. (With some pretty abstract ideas)

Now I've been playing a lot of War Thunder (a free PC games) and I've identified a few key elements in air combat:

A fourth factor which is not as directly related is:
4. Detection (allows planes to position themselves without opposition) 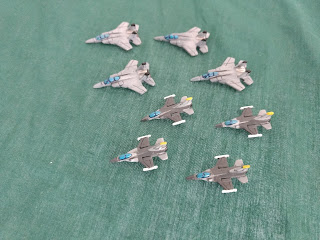 The more boring "good guys". As I was painting them, I was struck with the fact the majority of modern jets have their origins in the 1970s...
Flying my P-51 Mustang on my PC, I'm struck by how efficiently trading speed/height/positioning seems to be so important. Without the fear of real combat, it can be quite clinical in a PC game "I can make a tight turn and get a shot off (position), but I'd bleed off too much energy (speed), so..."  or  "If I dive now, I can convert height to speed, and run down that bomber."  Or choosing between a high or low yo-yo.  I spend a lot of time doing mental calculations of time/speed/distance/angle. Further, detection is vital. I'd say the vast majority of aerial kills occur without the attacker being seen.

Then there are two "modifiers"which strongly impact the above elements:

(+) Pilot Skill (a good pilot finds it easier to convert speed/height/position for attacks/avoidance) and
(+) Plane Performance (a good plane has better potential speed/height/agility to position and even may have better detection).  I.e. things like Thrust/weight and wing loading, the firepower to execute attacks, robustness to resist them, visibility from the cockpit)

While very important, I wouldn't say pilot skill and plane performance are key elements in themselves, but rather impact the elements. 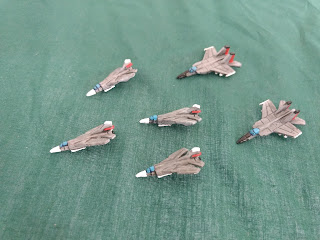 I've always had a soft spot for the much-maligned MiG-23. I like their practical, businesslike look and although they don't have notable agility they have good thrust/weight and speed.

In my April post, I wondered whether height could be removed and simplified into "potential energy" but I think height is integral to air combat and abstracting it could lose to much of what makes air combat what it is. Differing altitudes impact positioning strongly in a way abstract "potential energy"does not. (There are a few rules, notably C21 Air War, which do away with height; incidentally it is a set of rules where you could attempt to fight a decent sized dogfight in a reasonable amount of time).

By the way, I'm not claiming my analysis of air combat (based on a PC game!) is exhaustive or accurate - this post is a kind of "train of thought" exercise showing my evolving thoughts on the topic (and hopefully inspiring someone more talented than me to write a set of relevant, modern rules instead of copying Blue Max for the tenth time!)

Anyway, I'm looking at the "four factors"and thinking "how simple could you make these, while retaining the essentials of a dogfight?" I'll probably start with a trimmed down set of conventional(ish) rules, and contrast it with more abstract ideas.
Posted by evilleMonkeigh at 19:04