I've covered maneuver in the last post - it is a very simple system, far more "gamey" than realistic. The aim was to keep the "feel" of air combat (tradeoffs between speed/position/height) without strict scale besides "it looks OK on the table."

The player is a flight leader/squadron leader controlling 4-12 aircraft, and the aim is to make the game play no slower than a skirmish game like Mordheim or Infinity.  As a result, we don't need to micromanage each plane, measuring precise airspeed, doing 5 degree turns etc. Instead we are giving pilots general instructions.

I do have a more traditional style of movement (has similar effect to CY6 but without the recording and charts, uses 3 colours of d6 to track 3 height and 6 speed bands) but this slows the game. 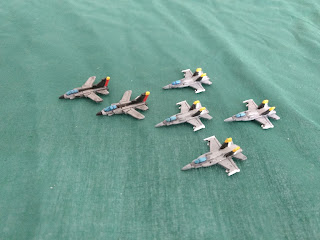 Some FA/18s and Tornados. I enjoy painting 1:600s - they are simple, satisfying, and "pop"well at tabletop ranges.
Detection
Besides maneuver trinity of positioning/speed/altitude, detection is the vital element of air combat. Most planes are shot down without seeing their attacker, and nowdays planes carry complex electronics for detection, stealth, countermeasures etc.

I'm going to use the same 180d hemispheres as the movement rules; enemies are either "in front" or "behind" and can be "above" "below" or "same altitude." I like 180d as you can simply eyeball things without measuring - or if needed, hold your ruler in front of the model's base to check. No fancy charts or measurement aids needed.

Radar Detection
To limit the amount of die rolls, players may attempt to spot using radar OR Mk1 eyeball, not both (unless a 2-seater like F14).

I may allow hidden movement - i.e. counters which are only revealed when enemies detect them, with dummy counters etc - but at the moment I'll focus on the ability to engage enemy targets.

Radar range will vary depending on the plane
Radar arcs - the front 180d arc, + targets above or below must be at 4" range or longer
Radar lock is a roll based on the quality of the radar, say 3+ for a good one

A single roll is made and ALL planes in the correct arcs/range who pass the roll will be spotted/locked.

As an example, a plane might need a 3+ on a d6 to lock.  Target A is at the same altitude so needs the usual 3+, but Target B is below, so needs a 4+.  A single roll is made for all targets, so a 4,5 or 6 would mean both planes are detected but a 3 would mean only Target A was detected.

Visual Detection
Visual range - enemies are hard to see, if they are: above and sunward, behind or below or in clouds. Each condition halves the visual range. E.g. if behind AND below, 1/4 usual visual range.
Visual "lock" - the lock/detect number is based on crew skill i.e. say 2+ elite, 3+ veteran, 4+ rookie?  Perhaps add a -1 penalty if to the rear with a bad-visibility cockpit like a MiG-25.

Sunward - an edge of the board is designated as sunward.  Clouds can be seen into/out of (at half range) but not through.

Again, like radar a single roll is made and all targets that roll equal or above are spotted.

Well, this may seem quite detailed compared to my casual approach to maneuver rules, but that is because I think detection is so important to simulate air combat. 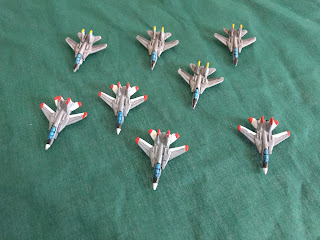 These F-14s remind me of Macross fighters. I may do an anime space spin off (eschewing height and adding zany heroic feats and swarms of missiles).

Move/Shoot Ratios
As I've said, scales are pretty loose - it's more about how it looks on the table and the 'feel' rather than precise measurements like 1" = 500m, 1 turn = 5 seconds etc like some rules specify.

What I DO want is to keep firing ranges relatively low and movement high. A normal skirmish game has a move/shoot ratio of 1:4 (i.e. 6" move, 24" shoot); I'm aiming for 1:1 or better in favour of movement.  I want to encourage planes to move and maneuver, not snipe from long range.

These are just ballpark figures, but you can see the firing ranges seldom exceed the movement ranges. In practice, this emphasizes maneuver.

Game Mechanics? Bah Humbug!
Well, it's getting late so I'll save game mechanics for another day. Spoiler: I'm actually going to use the Warhammer 40K roll to hit-save-roll to damage using simple d6s.

The older I get the less I care about mechanics. Move shoot ratios, activation, resource management, modifiers, maneuver, etc - all these things matter. The mechanics themselves don't so much (I'll do a game design post on this sometime soon) as long as they are simple and consistent. A bonus if they are familiar, to decrease the "buy in" for new players. I personally prefer d10s (10% increments make balancing the game easy) and d6s (everyone has them, familiar).
Posted by evilleMonkeigh at 07:48