...I thought I'd kinda "tie off"my thoughts on air combat with playtest results and comments on the movement/activation system.

Planes could attempt to "dodge save" using their pilot skill (4+ for an average pilot). Planes were identical on both sides so no agility modifiers.

Each unsaved hit had a 1-2 no effect, 3-4 damage, 5-6 kill. A damaged plane was -2"subsonic/-4"sprint speed, and -1 to all rolls.  A second damage destroyed the plane.
A non-damaging hit "stuns" a pilot temporarily next turn but has no effect on the aircraft.


Playtest verdict:
It was a bit too easy to transition between subsonic and sprint speeds. Perhaps a rule where you have to move at top subsonic speed (i.e. no turns or climbing) before transitioning to sprint speed next turn. Planes just seemed to spurt forward and brake too easily and dramatically, like something from a Robotech cartoon.

I wanted to restrict supersonic maneuver partly realism/G-forces and party to make it a trade off i.e. supersonic-limited maneuver, subsonic-very agile. However there's no reason a supersonic fighter can't climb OR dive OR turn - just not both climb+turn at once.  So I'd ease up on my original restrictions - especially if I had a "transition" phase like mentioned in the paragraph directly above. 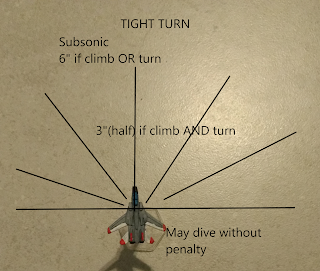 The subsonic turns seem stilted... ...but perhaps I am just too wedded to oldschool/ hex based plane games

The subsonic turn just seemed weird; to pivot and move directly forward seemed.... unplane-y. However I may be merely carrying over my prejudices from old aerial games.  I could do a 90d-ttun-at-halfweay then 90d-turn-at-end  like the supersonic move. However I'l need to look at the pros and cons of changing this.

Weirdly, the mechanic I REALLY liked was my activation system, a kind of Bolt Action bastardization. I am not a fan of the Bolt Action activation normally, but my system worked well here. What I WANTED was a semi-chaotic card draw, with better pilots having more cards (thus getting more opportunities to act). However I decided stuffing around with cards was too slow (a key design goal was to speed up the painfully slow aerial rules genre).

So I decided to draw dice from a pot instead, a la Bolt Action.

This is what I did:

DICE VERSION - Modified Bolt Action
A dice is placed in a pot for each plane,  + 1 “high” wild dice + 1 ace dice per ace (each faction uses their own dice colours)

When your colour dice is pulled, pick a plane and roll a Crew Check.

(+) If the Crew Check succeeds, you can move and lock+shoot at a target (in any order)
(-) If the Crew Check fails, you may either (a) make any move, but forgo locking/firing; or (b) lock and fire but move directly straight ahead (at max subsonic speed).

Wingman: you may interrupt the turn sequence and move directly after your wingman if you are not damaged or stunned. Simply remove a dice from the pot and roll it like normal.

High & Fast: if you are the highest (or if tied, the fastest) when the high & fast wild dice is rolled, you can act on it. Also remove one of your dice from the pot and roll both it AND your wild dice – and use the best roll.

Stunned/Damaged: If you are stunned or damaged, -1 from your roll.

TL:DR Basically, you pull one of your dice out of the pot, you roll it. If it's not yours, give it to your opponent and he rolls it. If it beats your crew skill level (4+ for an average pilot) you get to maneuver (turn/climb/dive) AND shoot.

If it fails you only get to choose between moving OR shooting. I.e. move straight ahead, but shoot...   ...or make any maneuver, but miss out on shooting.

This worked really well. It added uncertainty (whose dice would be pulled out, and would you get to make 1 or 2 actions) and also choice (which plane to move, and choosing move vs shoot if you rolled badly).

For a quickly cobbled together mechanic, I really liked it and I can seem myself using it again, perhaps in my helicopter or fighter sub homebrew games.

Anyway, aircraft will be left sitting on the bench for a bit as my dieselpunk tanks have arrived... but I'll get back to this topic, I swear!
Posted by evilleMonkeigh at 01:28