As I continue to "down scale" I am venturing into 6mm.  I remembered trying A Fistful of Tows maybe 10 years ago - a demo ruleset with a strong design philosophy with a commitment to balancing playability with realism, and allowing fast turns with lots of units. Troop quality was important. Apparently there was a new version, so out came the credit card.... 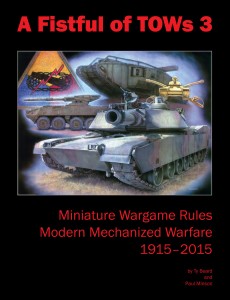 FFT3 is a mammoth tome. Choosing the spiral-bound version was a good choice.

The Shiny
The format is B&W with a colour cover. I picked a spiral-bound layout ($67 delivered from Lulu) due to the hefty size (also - spiral bound is great for laying rulebooks open or photocopying stuff).  At a jaw dropping 454 pages the size and cost are the two things that instantly stand out. However it is not a complicated game at all.  The actual core rules are 112 pages (or 25% of the book) with an additional 44 pages which are optional (combat engineering, choppers, airstrikes, airborne, amphibious, chemical and nuclear attacks).  The bulk of the book is from the 263 pages of "army lists" - orders of battle for pretty much every country's forces at brigade/regiment scale from 1915 to the present along with vehicles, infantry and weapon details for those forces, as well as detailed rules for designing your own.  This hefty tome is probably the most comprehensive resource of its kind I have come across and would be very useful for other WW2-modern games besides FFT3. There is a detailed appendix and a handy quick-reference sheet that helps keeps things manageable. 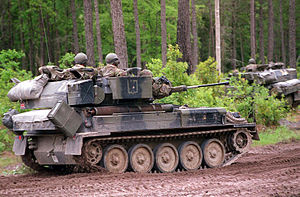 Britain always has quirky and cool armour
An impressive resource
It has stats on every significant weapon; from a Pak88 to a Hellfire missile; from a Messerschmidt Bf109 to a F-22 Raptor.  Tiger tanks are included as well as T80Us.  Soviet Tank Regiments from 1943 are detailed along with modern Stryker brigades; with troop types and quality. There are also rules to design your own, if somehow you find something not included. When you realise you are getting a set of rules as well as a 260-page reference book, in one, the $67 seems more reasonable. There is a cheaper $40 (!) pdf option (maybe for an iPad? - I can't imagine printing it out yourself...)

Core Mechanics
Do not confuse the size of the rules with complexity.  Whilst the most detailed FFT set yet, the game is eminently playable. Indeed, the core rules could be condensed from 118 to 30-40 pages easily as the authors tend to spell things out rather "wordily".  In fact, the earlier free "demo" version of FFT2 (an earlier edition) is 43 pages. The game plays fast and each side's movement can be completed in under 5 minutes.  Note: Each vehicle stands for a group of 3-6, and individual infantry elements are platoons; although the game can be played at 1:1 i.e. each element is a squad/vehicle, simply by adjusting cohesion distances and ranges. Activation is "attacker" then "defender" as per the scenario (or basically IGOUGO, which I am not a fan of) but the "overwatch/shoot-and-scoot" abilities allow some interaction in the opponents' turn. Wargames Vault has free demo rules of FFTW3, including enough to play WW2 or late 1980s NATO-Warsaw Pact.   In summary - it's actually pretty fast and simple to play. 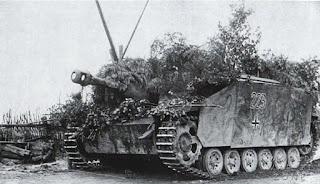 The StuG wanted his cover save...
Movement & Terrain
Troop quality is all-important. There are 7 levels:  Poor-Marginal-Fair-Average-Good-Excellent-Superb - which is surprisingly precise for a game using d6.  The game uses a Warhammer 40K "cohesion" range which varies from 2" (poor) to 8" (superb).  Terrain rules are quite comprehensive, but like FoW, vehicles must make a terrain-saving throw (say 4+ for average troops) if in difficult terrain or they can only pivot in place. 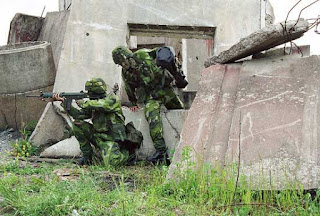 Infantry tend to dominate in built up areas and can be deadly in close quarters against unsupported vehicles
Combat
Units without stabilised guns or early 1st gen missiles may not move and fire; units that do not fire in their turn may go on "overwatch" and interrupt and fire in an opponents' move, or "shoot-and-scoot" - i.e. interrupt, fire, then retreat half a move.

Most weapons need a 3+ at close range, 4+ at effective range, and 5+ at long range, modified by the firing unit's troop quality. Rate of fire is likewise affected - poor troops fire more slowly, superb troops can pour in extra rounds.   Units in cover get a "cover save" against any hits - say 4+ if in a town.

Vehicles have two arcs - front and flank - and different armour values against kinetic or HEAT rounds.  For each shot that hits, roll 1d6 equal to the weapon penetration - target armour. Close or long range modifies penetration by +2 or -2.  I.e. a KV-1 (Pen 5) vs a Pz.III (Armour 4) at close range gets 3 dice.  If any 4 or 5 is rolled on the d6, a quality check is made (only 1 maximum, no matter how many 4 or 5s are rolled).  A '6' on any die destroys the target.
Say for the 3 dice rolled, the KV-1 gets a 2, 4 and 5. It forces the Pz.III to make a single Crew Quality check. Units who fail a CQ check are destroyed.  Superb troops need only a 2+ to pass; average troops need a 5+. Better troops are much, much tougher and more resilient to incoming fire.

Infantry units can get into close combat - withe the non-moving player firing first; sides alternate firing until one side is destroyed. Infantry tend to maul unsupported vehicles in close combat as they always count as having a flank shot.

Artillery rules are quite slick and fast - barrage markers are placed in 2" cohesion. Scout units can place 2 markers, and normal units one.  A dice is rolled for accuracy (modified by observer skill) - if it passes, the barrage has full effectiveness. If not, it has reduced effectiveness.  An "area fire problems" roll is made which could result in the barrage marker "scattering", a fire mission being cancelled or counter-battery fire hitting the artillery unit. Rolls are then made for units under artillery markers, modified by the number and size of guns involved in the barrage.
Summary: Pretty simple, consistent mechanisms. Troop quality matters. A lot. 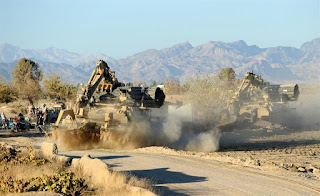 Combat Engineering rules are an interesting inclusion.
[Picture: Sgt Rupert Frere RLC, Crown Copyright/MOD 2010]
Other Stuff
FFT3 is very comprehensive. Besides the "basics" there are rules for helicopters, airstrikes and AA.  Combat engineering (mine clearing, bridgelaying, demolition) is also covered, as well as amphibious and airborne assaults, chemical warfare, and the limited use of small tactical nukes.

There are scenario generation and campaign design ideas and tips, as well as a "battle generator" that allows you to roll random battles on a chart that considers the last battle you fought. For example if your last battle was an "encounter" you are more likely to fight a "hasty battle" next; if the last fight was an "encirclement" you are more likely to roll a "breakout" scenario next time.  I think this is a great feature - I wish more games had it. Missions are random, but are likely to progress logically from the previous mission.

There is a comprehensive section for designing and point costing vehicles. I am toying with making some "mechs" and using FFT3 for near-future sci fi (although I believe the authors are working on an official sci fi variant and have indeed previously made the free game Railgun 2100 based on the older FFT2.

I also like how the game isn't too heavy on chits or markers; - "suppressed"  "overwatch" "quality check" and barrage markers could be easily made; I intend to use the cheap coloured tiddlywinks supplied by EM4.
Summary: Great campaign and scenario ideas - a broad toolbox all aspects of modern warfare from chemical weapons and engineering to gunships

Army & Equipment Lists
As I said before, this is huge, and very detailed. I like how all stats for a weapon or vehicle fit on a single line of text.  I can't vouch for the accuracy of them - but vehicle stats can easily be altered to reflect your opinion using their build-it-yourself rules.  I'm considering using it for near-future sci fi and making up hover vehicles and walkers.

In the army lists, I like how at the bottom of the regiment details, it shows how many "stands" or individual troops you need; allowing you to easily know how many minis you need to buy for that particular combat formation, making it easy to plan your purchases, i.e.
British Armoured Infantry Battalion 1980s+:  2 Scorpion, 2 FV432 Mortars, 2 Spartan w Milan OR 2 FV432 + Milan teams, 9 IFV, 9 infantry stands

TL:DR
A huge (450+ pages), expensive ($67) rulebook; but its exhaustive orders of battle covering pretty much every army, weapon, troop and system information WW2-2015 would be of value to most modern gamers regardless of the rules themselves. The rules are simple and play quickly despite their wide scope.  I think the main issue with FFT3 is that the rulebook is a significant investment, not really a casual purchase, and $40 seems frankly ridiculous for a pdf. However the plethora of demo rules available means you can decide if the gameplay is for you before investing.

+ Fast turns, playable - get lots of models on the table, finish in a reasonable amount of time
+FoW-ish level of complexity, whilst delivering a deeper, more tactical game
+Points system allows some balancing to be done for "pickup" games
+Sensible cohesion/command rules
+Emphasis on troop quality
+ Immense 260+ page resource for orders of battle and weapon and vehicle stats, WW2-present
+ Design and modify equipment and vehicles
+Comprehensive "toolbox" for WW2-modern wargaming
+Campaigns, scenarios well catered for. I like the "battle generator" for campaigns
+Try before you buy - WW2 and Modern demos

Recommended? Quite impressed - admittedly I only have the rather bland Cold War Commander (a ripoff of GW's Warmaster/Epic rules) and the turgid 1980s-billions-of-charts WRG rules to compare with (I haven't tried Spearhead). Don't be put off by the size of the book - it is 75% army and equipment lists - FFT3 has quick, intuitive gameplay, allowing heaps of models to be handled relatively easily; and has a focus on troop quality. Recommended.
Posted by evilleMonkeigh at 06:12