Miniatures Sales Determining Game Design
I've posted elsewhere on how "Warhammer" has changed its design philosophy. Originally it was designed to provide a way to game characterful RPG-style adventures on alien worlds you could make up yourself.  Now, its aim is to be streamlined enough to push large quantities of miniatures around a table, with a very low "entry point."  Official miniatures and terrain, mind you. Don't go getting any creative ideas.

I know a few people who liked the "streamlining" of 40K that took place to fulfil this new design philosophy - but that's because they were wanting to use it with more miniatures anyway.  The people who wanted  to play games with bucketloads of their miniatures and vehicles were, arguably, looking for a different style of game than the old RPG-lite style early editions to begin with.  Those people who want to play with lots of toys are exactly the target audience you want, if selling said toys is your business.

Using generic rule mechanics is good, because you can sell miniatures from different eras and genres more easily.   The "learning curve" is quite mild, and the comforting familiarity means it is easy to convince gamers to start gaming (and more importantly, collecting minis) in a new period or genre.
Does your fantasy game use the exact same tactics as your sci fi game? Excellent.

Sometimes games have extra factions "jammed" into them simply to sell more miniatures.  Other times, (poorly selling) factions quietly disappear.  "Necrons" were not original 40K lore.  Squats (space dwarves) were, and I haven't seen them featuring in any codexes lately.  Miniature sales can also drive the "lore" or "fluff" of the game. (A feeling which will be familiar to Star Wars fans) 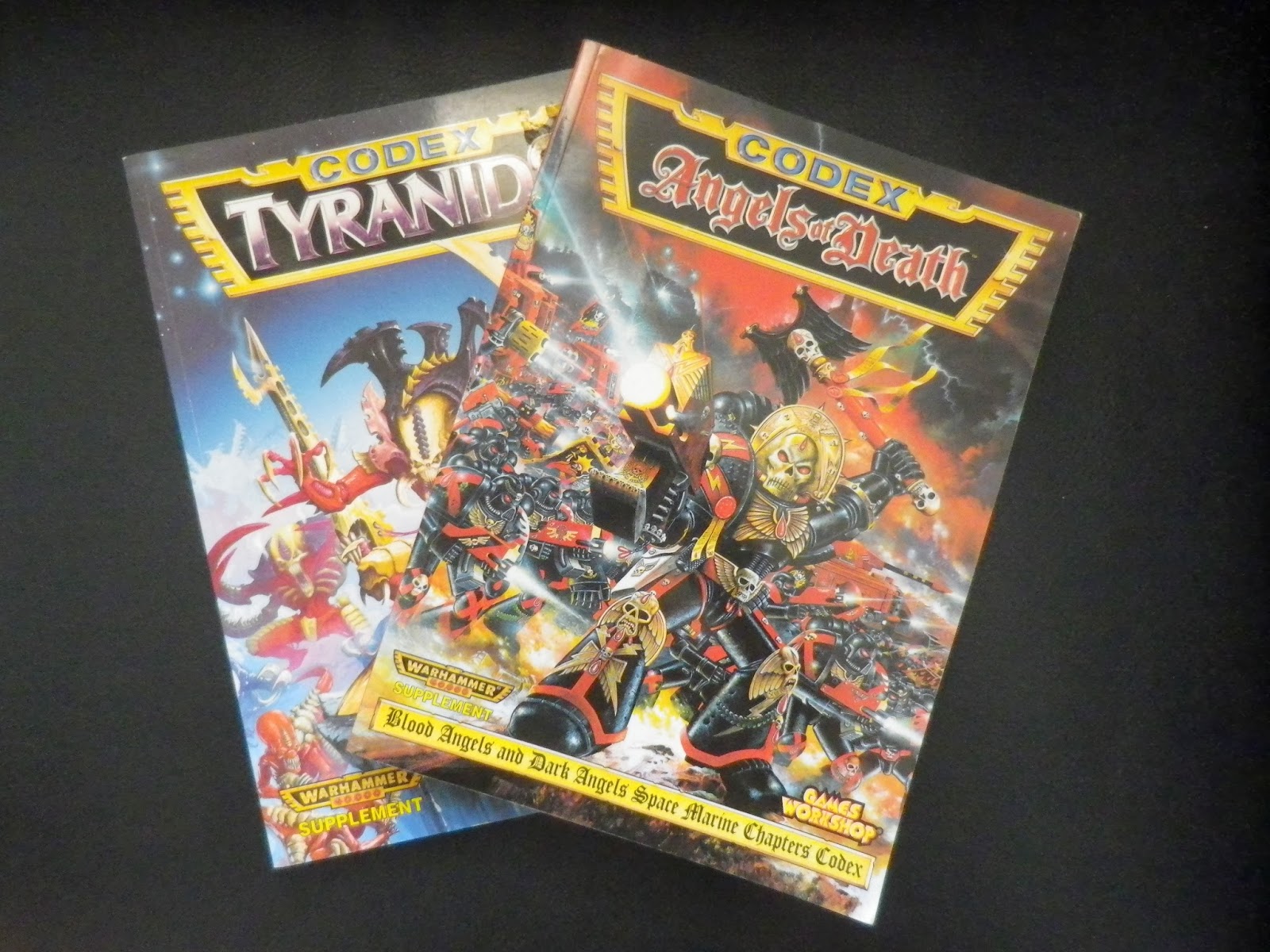 This article was in part prompted by finding these 40K codexes in my rules shelf. They date from circa ~1996. Utterly pristine, and utterly useless. Unless I can find that one guy who still likes 3rd edition best. Built in obsolescence - it makes great business sense.
(Only $110 to replace them with "current" ones - bargain)

Collecting armies = Miniature sales = Profit
Other times, factions or units are unbalanced deliberately. I notice this with new releases.  How often do you see a new release that is "underpowered?"  No, instead they are given powerful traits that make them doubly desirable - shiny, new and easier to win with. Once everyone has rushed out to buy them, and enough have been sold, then they can be "nerfed" - or better yet, an even newer, shiny, more overpowered faction introduced, so the process can begin again.

Specific miniatures or units can be "unbalanced" -  ugly or "meh" models might have their stats boosted to make them must-haves for any competitive army.   Releasing new models that look nothing like the old ones creates "built in" obsolesence.  Most people dislike "mismatched" armies - if the new space elves look completely different to your old army, and yet you really want to field a (deliberately overpowered) unit only available in the "new elves" design, the compulsion is there to replace all your elf miniatures with the "new" pattern so they match up.

Making "army building" important to winning makes great business sense.  This emphasizes the "model collecting" side of the hobby.  If you can win simply by owning the right models, then you can make buying models very appealing.  Gamers don't need much of a nudge to buy more minis, but if you can tie miniature ownership to winning - well, collectible card games make a lot of money out of the compulsion to field a "killer card deck" (aka army).

This whole thing is most rampant in sci fi and fanfasy, where the miniature manufacturers are  unconstrained by history.  On the flip side, if you game more limited conflicts like the American Civil War, there is little chance of it being invaded and "commericalised" as there is less lattitude for factions - as selling "blue" and "grey" army books separate to the rules is a tad too blatant, though you could make campaign and scenario books I guess.

As you can see, I think miniature sales are driving (most) game design, and have been doing so for quite some time.

The Circle of Supplements Life
This is the cycle of going round in cycles, updating rules. What Warhammer Fantasy are we up to? 8th edition? 9th?  I find it ironic when games companies update their rules more energetically and often than most encyclopedias and medical textbooks.  Then they  produce accompanying "army books" which themselves need to be updated to keep current with the rules.  They update things simply to create for themselves a steady stream of products.  It makes sense - with inbuilt obsolescence you create your own self-sustaining market.

By changing to a "new" rulebook you tend to force all your customers to switch as well. Yes, you can cling defiantly to your 2nd edition Warhammer 40K rules, but you're restricted to your mates playing at your house.   Imagine if, as a car manufacturer, every time you produced a new car model, it forced everyone who already owned your brand of car to buy that model, or be unable to use their old car on public roads.  It would be bad business not to change the model regularly, whether the car needed improvements or not.

However, why not make new shiny things, instead of always regurgitating the old? Heck Games Workshop even reduces its lines - it focuses on the three "earners" - Warhammer Fantasy, 40K, and LOTR - although I can see LOTR getting the chop after the Hobbit movies run their course. Games like Blood Bowl, Mordhiem, Epic, Space Hulk, Battlefleet Gothic etc have been quietly pensioned off.  That's what a lot of fast food companies used to do - minimise the variety of products, and maximise their production.

I find it interesting that Mantic, which obviously got its start by offering cheap GW-style minis in a very un-original manner, and offered similar, pretty bland games in Warpath (40K) and Kings of War (WFB) is now is branching out - Dwarf King's Hold, Deadzone, Dreadball, Pandora Project - which are expanding to fill "niches" abandoned by GW, with games that are increasingly creative and "different."

I really wish GW would just tear up their mechanics and start afresh.  This will never happen, as using old mechanics is "familiar" to their audience and gradual change is the key to retaining them.  However, there is only so far this "evolution" can take you.  You can tweak and tune the engine of a tractor, but sometimes you've just got to bite the bullet and buy a purpose-built race car, if winning races is your dream.

Mantic have surprised me - they stared out as very bland and deriative, but seem to be getting more original as they go.  It helps that they have perhaps the only ex-GW author (Jake Thornton) who actually writes new rules (instead of rehashing various GW mechanics). Deadzone seems aimed at the skirmish-campaign "Necromunda" market which GW abandoned and I admit I am tempted

Most "good" "fun" interesting rules usually start out with a small, enthusiastic group - usually friends, family, guys from the local gaming club. They want to make games they enjoy. Even Games Workshop would have been like this once.  Then, as it becomes more successful, the "business" side creeps in - you need accountants, advertising managers, business managers - often people who don't play the game or aren't interested in wargaming, period.  It becomes more about the "bottom line" and less about a "good game" - although the "good game" is what what brought the success in the first place.  I think the balance of power shifted to the "business" types in Games Workshop a long, long time ago - and I can see other companies heading down the same route. You can't argue with their results though - every year I think their business model is unsustainable, and yet every year they churn out huge amounts of cash.

The eternally unfinished game - "Well supported" = "Incomplete?"
When is a game actually complete? According to Games Workshop, the answer is "never!" as long as people are willing to pay. There's always some supplements or codexes to "update" to the latest edition of the rules.  They call it "supporting the game" but I call it "good business sense."  After all, why take the risk creating something new when you can simply remake the old and proven? There's a reason 90% of Holywood movies are sequels or remakes.

Its a bit like education reform. There is always some "new" way to teach kids, and always a new curriculum or "magic bullet" which is better than the last.  The curriculum designers and educational experts will never say "that's good enough" or "this system works OK" - because they'd be out of a job!

But perhaps it is the gamers' fault.

A question I often hear asked when a new rules set is released is:

"Does the game have support?" (which sounds like they want to be reassured supplements will be available)  Should it need support? What is missing from the game that needs "supporting?"

My question would be 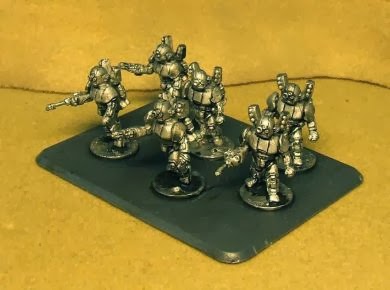 The Ambush Alley (rules) GZG (miniatures) partnership works well. Because both companies are successful, and independent of each other, they can mutually benefit without "compromising" their focus (i.e. making good minis, or making good rules)


So, in the grim darkness of the 21st millenium, there is only commercialism

The evil crystal ball of Saruman the pessimist reveals:
*More generic rulesets play the same, regardless of era/genre, and use identical mechanics
*Games that are overly simple and not terribly challenging to keep a low "entry level"
*Games that emphasize collecting miniatures aka "army building" over tactics
*An increase in "supported" (aka incomplete) games that require a steady stream of supplements
*Rulebooks changing edition on a regular cycle
*A repeating cycle of unbalanced factions or units in competitive games

Unsurprisingly, the most commercially successful rules seem to share many of these traits i.e.
Warhammer Fantasy/40K, Warmachine, Flames of War, Bolt Action

So, to put a positive "spin" on this - what are some companies or games who DO NOT take this route?  I'd nominate Bombshell Games and Two Fat Lardies as rules publishers that seem to go against the "flow."  Games without a specific miniature line to "sell" tend to score well. For example, Ambush Alley Games now has a lot of "licensed" miniatures, but the miniatures came AFTER the rules, and thus did not drive the game design.

Miniatures manufacturers tend to want to "hitch" themselves to a ruleset. Having a set of rules associated with your model line obviously helps sell miniatures. The danger is when the balance shifts and the rules simply becomes a vehicle for selling miniatures.  When your design philosophy is simply making your game "accessible" "easy to learn" and "generic" and to emphasize "miniature collecting" - rather than aiming for "tactical" "challenging" or "historical" - then that is what you'll get.