Sorry - I'm not going to suggest scenario ideas for you. This post shares its title with the name of a old (~1981) book by Charles Stewart Grant, of WRG.

It is a purpose-built book of generic scenarios.  52 to be precise. As the author points out, there's one for each week of the year. For someone who is used to most rulebooks including 4-6 scenarios at best, this is a tremendous resource, well worth the $25 I paid for it secondhand.  Heck, you'd pay more than that for a Warhammer supplement with only 10 extra scenarios. If you see a copy lying around - snap it up! 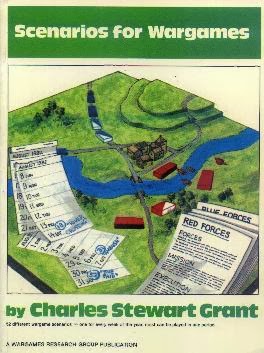 52 generic scenarios - you could play a different one every weekend for a year!

Each scenario has details on the "mission" itself, there is a generic map with accompanying explanations, it suggests a period (most are horse-and-musket but can be adapted with commonsense) with red and blue teams (usually described as infantry, light infantry, light or heavy cavalry, or artillery) as well as details on how the scenario will unfold as well as "winning" conditions.

As I was paging thorough this very useful resource, I was thinking I wish instead of somewhat period-specific "light and heavy cavalry" there was simply a "ratio" of unit strength - that would make it easier to use a points-based wargame from any era.

Which brings me to:

The Army Lists/Points vs Scenarios Chestnut
The "points vs scenarios" debate always seems silly to me, as it seems commonsense for a rulebook to always include BOTH.  Those who refrain from including "points systems" for a range of philosophical reasons and are "scenario only" (such as Ambush Alley Games) are:
(a) limiting their target audience, namely those who want to play "pick up games" and who don't have a regular opponent, or who don't have the opportunity, desire or time to prepare scenarios, or
(b) making life difficult for the scenario players themselves, who are seeking a rule of thumb to "balance" (or even "unbalance") said scenarios.

Likewise, games with only a "kill em all" style encounter games a.k.a. deathmatch (such as the early versions of Infinity or Warmachine) tend to become repetitious and dull rather quickly.

I mean, if the players don't want to use either points systems or scenarios provided, they don't have to.  The game designer is unlikely to come around to your house and repossess your rulebook if you don't use the method he likes best.  But to deliberately omit one or the other from your rules is to deliberately alienate part of the gaming public. I mean, I presume game designers want to sell their rulebooks?

The Holy Trinity
Mr Grant himself suggests points systems have a place - good for creating reasonably balanced forces with an element of the unexpected  i.e. you don't always know what the "1000 points" will consist of - as the number and type of units which make up that "1000 points" can vary greatly. Points systems are good for arranging "spur of the moment" games and are very convenient.

However these games lack meaning and context.  A campaign gives a strategic background that adds meaning to the battle.  The variations are infinite. It can be as complicated or as simple as uou want.  It can include many "factions" or countries, include personalities, resupply, prisoners, casualties, even "out of game" politics and intrigue. It might use a strategic map or it might not.   Many regard a good campaign as the pinnacle of wargaming. However these take a lot of time and effort to organise - campaigns are pretty much the opposite end of the spectrum from the easy points-based pick-up game.  It is also hard (unless you are the stereotypical but rare unemployed gamer living in mum's basement) to find time to play the many consecutive games required for a decent length campaign.

Mr Grant suggests the scenario bridges the gap between the points based games and campaigns. It can be played in the time frame of a "pick up game" but provides a sense of background, of purpose - a "mission" - and allows for unbalanced forces. Victory is not simply "wiping out" the enemy. Ah, variety - the spice of life!


But which is best?
In the foreword, Mr Grant makes some comments I find interesting. It might be informative for the "scenarios-only-points-are-AIDS camp" (who in my experience are far more militant in their attacks on the "points based" folk than vice versa).

"....it is not the intention (of scenarios) to replace confrontation games or wargames competitions"

"...it (scenarios) is not intended to be a alternative to wargames campaigns, but perhaps a subsitute..."

The man who wrote what I regard as the ultimate "scenario" bible preaches tolerance.  He sees that all three methods have a purpose, and can co-exist peacefully. No one method should exclude the others.

I think the better question is not "which is best, points or scenarios?" but
"Why do not all wargames rules always have provision for all three approaches - points, scenarios, and campaigns?"
Posted by evilleMonkeigh at 03:41