While in a local hobby shop I noticed Halo: Fleet Battles - you get 50 ships for $150AUD, compared to 3 ships for $120AUD (Star Wars: Armada). It seemed quite well priced (well at least sensibly priced compared to the GW-esque price gouging perpetrated by FFG) , so I hunted out my unassembled Relthoza and my Firestorm Armada rules to remind myself what I was (or wasn't) missing. 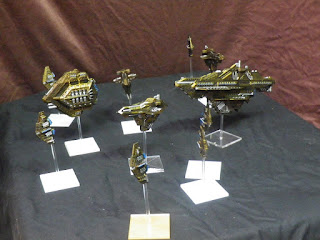 The bases had some sort of adhesive on bottom, that will not come off.  The bases are just a perspex square, with a hole drilled in it, plus a pole.
Definitely the worst space bases I've used.

The main problem is the rules. Which are essentially a dumbed-down version of Battelfleet Gothic, with less depth and more randomness.  Someone thought it would be a good idea to use these rules for four games - Uncharted Seas (a.k.a. Man O War), Firestorm Armada (a.k.a. BFG), Dystopian Wars (steampunk naval) - as well as Halo (Firestorm Armada copy).  Since it's essentially the same game with different models, they have product lines competing directly against themselves.  I never got into Dystopian Wars, for that very reason.  I mean, I didn't think FA was that good, so why would I pay $100+ of models to play the exact same game, only with steampunk? (The sculpts also didn't impress as they tended to the cartoon-y) It would be understandable if the rules were good, but they aren't. 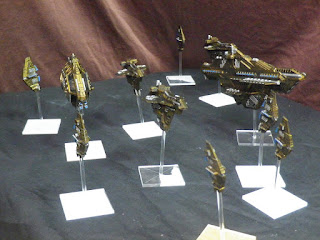 I'm actually quite pleased with the paint job, considering they took me an hour and a half total to do them all(!).  P3 Blighted Gold drybrush on black undercoat, GW Chainmail highlights, and GW Enchanted Blue engines. Three colours. That's it.  No washes, extra coats, or even touch-ups.

Some issues I have with the rules/minis:
-Buckets of dice, exploding dice that ensure skill is subservient to randomness
-Generic-looking ships, with generous mold lines (has improved lots since the horrifically bad v1 Dindrenzi sculpts, though) - I mean, the Terran, Aquan and Dindrezi stuff is very much lazy CAD work
-Ships are generic in game (think Chaos vs Imperial in BFG i.e. one side might get +5cm gun range or +2d6 broadside)
-100 pages of errata (I think the rules are only in their third incarnation, but they feel like they swap sculpts and rules more than GW); + poor rules layout (also a frantic/schizophrenic release schedule)
-Fighter rules about on par with BFG (i.e. lame)
-Big ships cannot even move their own length - visually feels like snail wars rather than space wars
-Bland, insipid fluff

My one word review of Firestorm Armada (and all associated games): "Meh."

It's not terrible - it's just not very good.

Actually, there is an upside - I often see them in the bargain bin section of online retailers (hence the fact I have 3 fleets) and the large size makes them suited to scale with Gundam-style games using 15mm GZG mecha with the rather good Lightning Strike rules (the original reason I purchased them). 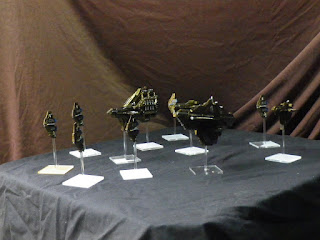 I find it weird how slavishly people copy studio paint schemes. It's a good argument for pre-painted minis if they all end up the same!  I do like the vaguely "Homeworld" vibe of the Relthoza but I think they still, like most FA minis, are a tad bland or "lacking" in some way.

Especially if the studio paints scheme isn't that crash hot.  I wasn't ever a huge fan of the pastels....
...and camouflage, by it's nature, does not help your models look more striking - I avoid it except when strictly necessary....

So why the swipe at Spartan?  Do you hate the company or something?
Not at all. I wish them all the best.  I was very impressed by their customer service when I got one of the dreaded "dodgy" Dindrenzi boxes back in the early days of the company. However I'm not about to encourage mediocrity - like many blogs that seem to gush over rules and minis that are average at best.   Whilst their Halo box set is very reasonable (models work out at ~$3ea rather than ~$40ea of FFG) their track record for rules means I won't be buying them to play the same indifferent game mechanics which they're recycled three times already.

Conclusion: Whilst the price point looks OK, I'm going to save my moolah for Dropfleet Commander which is looking better by the day - which combines sensor ranges, atmosphere and ground objectives to give what looks like our first genuinely interesting space game since... ...well, I can't remember.
Posted by evilleMonkeigh at 03:08