I really like the Brigade aeronef models but the "official" rules are pretty bland and minimalist. If "beer" is the ring left on the coaster, and the "pretzel" is half a low fat pretzel you found behind the sofa cushions, you could charitably call it a "beer and pretzel" game. 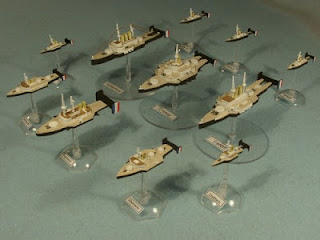 The models from Brigade are fun to paint. Sadly the official rules give the term "beer and pretzels" a bad name.

(Wessex Gaming) Aeronef Rules Review
I'm doing this as this game got an inexplicable 5 stars at the wargames vault. (Admittedly from three reviewers - I'm presuming they must have deleted all the negative ones). I've made a bet to myself I can explain the entire rules in a single paragraph. Ok, go!

There, I explained the entire rules without pausing for breath! Oh, and besides all those hitboxes, you have to write down speed changes. Missed mentioning the altitude rules, you say? Ah, that's because there isn't any....

....so naturally, I am interested in any alternative in this rather niche field. Cue Airships and Sky Pirates, stage left.

The art isn't that crash hot, but if you get a pdf you can't expect too many bells (or even whistles)

The Shiny
B&W except for the cover. There is a nice clear table of contents, and the quick-reference pages which I always look. The art is somewhat home-made and the font a little small, but it is serviceable.  Preview available here.  Fine for a $10 pdf. Actually, while I think of that - can I also make the disclaimer this is not a standalone product.  If, like me, you have no interested in VSF mass ground battles you still need to pony up an additional $10 for the core land rules "When the Navy Walked". So you're effectively paying $20 for two pdfs.  I'd like to see enough of the core rules added to make A&SP "standalone."   Note: Both pdfs are also available as $30 hard copy rulebooks but I wasn't shelling out $60 to test a ruleset...


Mechanics
Command points are important. You get 1d6 every 2 units, plus any leaders'  Leadership scores. They are a resource which are spent by giving units orders, and do not carry over from turn to turn.

Leaders in command range give orders, to move, shoot etc.  You are supposed to secretly record (ugh, recording = writing stuff down, innit?) who you give shooting orders to. Any "unallocated" units without orders may "react" after taking fire by shooting back, but only after they have taken the effect of any hits.  I'm not a fan of writing down the shooting targets, but otherwise this is a good idea which adds a good layer of tactics/resource management, without much complexity

Movement in atmosphere (flying craft) requires units to move half speed.  This and the 45d turns reminds me of the stately movement of Battlefleet Gothic.  In the aether ships can hover - they also can retain speed from turn to turn (vector movement) which you will need to track (more recording!), and gun ranges are doubled. Aetherships with solar sails use sailing rules. In atmosphere, there are 6 elevations you can conveniently mark with a micro d6.   Aetherships can break orbit and go "into the black beyond."

A&SP uses the tried and true "Full Thrust" damage system - i.e. 4,5,6 hit on a d6, with the '6' counting as double.  You tally the hits and compare them to your foe's Threshold rating. This is kinda like their armour/hull strength and shows how many hits a ship can take before it has hull damage.    I.e your 3d6 firepower ship rolled a 1, 4, 6 = 3 hits against a Threshold 3 opponent. The three hits reaches the Threshold level and scores a hull hit. Four hits against a Threshold 2 ship would do 2 hull hits, etc.

Any hits in a salvo that exceed the "Threshold" do damage.  There is a typical 2d6 "special damage" chart which can cause hits to weapons, optics, engines, and the usual "golden BB" on a roll of 12 which means "kaboom!"  Units may attempt repairs to systems. Much as I dislike any record-keeping,  there's probably a little less hitboxes & stuff than most space/wet navy games, to be honest.

Free cards for recording ship hits and internals are available at the Wargames Vault. 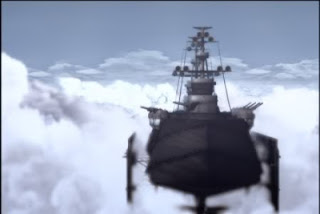 A&SP covers boarding, grappling, boarding, ramming and collisions, as well as air to ground and ground to air fire. You can even scuttle your ship if you want. There are also wind rules which work for "solar winds" and aetherships as well as conventional sail ships.

There are rules for small flying craft, sailing ships and aetherships.  I like the small craft rules which allow you to make "maneuvers" such as Immelman, dogfight, roll, and corkscrew which add different benefits if you can pass a command check. If they fail, they stall and might crash.

An interesting idea is Tesla "Broadcast" fighters. The electricity is generated on the carrier and transferred to the fighter via "Tesla wave" - making them effectively drones that are restricted to a certain radius from the mothership.  There is also a random table for aetheric flora and fauna, turbulence etc. Kinda like "the warp" from 40K.

Leaders can "sabotage" enemy units which is resisted with their "Espionage" roll.   A successful roll can cause an internal hit.

Scenarios, Skills & Perks
There are six sample scenarios including hunting pirates in asteroids and fighting a giant space squid.
There are additional "special rules" specific to A&SP which add to those already in WTNW such as incidiary bombs, chain shot, special bombsights, rams, improved agility- they can also include flaws like being flammable, reckless, or having poorly rigged sails.

TL:DR
Having to switch back and forth between WTNW and A&SP was annoying and at times confusing. A&SP should be a standalone product.  The fact "firepower" is the same for all ships, with no real differentiation between weapon types (where's my Martian heat rays, eh?) or even calibres means its only mild step up from Aeronef's "roll lots of sixes."  Damage at least is more interesting and the fact there is altitude (fancy that, altitude in a game involving airships *cough* Aeronef *cough*) is a plus - it's even easy to track. Speaking of tracking, I really dislike writing down/recording anything in a wargame (bad SFB experiences scarred me) but most space and naval gamers won't balk at recording special internal hits or writing down orders for shooting in A&SP.

EDIT: The Armchair General notes in the comments section below that a card deck will be available to eliminate written record-keeping. His post contains ideas for using counters or poker chips to track activation.

On the flip side, the basic mechanics are sensible, and the command system adds a layer of resource management (that could be easily recorded with a handful of tokens).  The "perks and flaws" are flavourful and A&SP covers a wide range of content (aetherships, airships, ironclads, sailing ships, sky galleons, biplanes/ornithopters etc).

I particularly like the small craft rules which are both simple and flavourful (I also like the idea of Tesla-wave fighters buzzing around in the aether) and the fact it shares mechanics with WTNW means integrating land and air battles will be seamless.

EDIT: Also of interest - The Armchair General says there is an upcoming miniature line.  As there is no such thing as "enough" VSF goodness, I personally am pretty stoked!

Recommend? Yes. I'd prefer it if Airships & Sky Pirates was standalone with all the rules in the one location, but overall a definite step up from Aeronef, offering easy ground-air-space integration.
Posted by evilleMonkeigh at 02:53