Every now and then a game comes along and impresses the heck out of you, with innovative gameplay or different ideas.  Games like this, for me include DBA, General Quarters, Infinity, Tomorrow's War, Song of Blades and Heroes, Malifaux, Battlefield Modern Warfare and Havoc. I add a new one to the list - a game called Coaling Stations.  Couldn't find a review on the net anywhere, so here goes.

The Shiny
It's a $6 plain text pdf, with a single picture on the cover.  In fact the rules are quite hard to follow and I had to re-read them multiple times to puzzle them out.  They kinda read like house rules - i.e. the author and his mates understand them and they assume everyone else knows them to. There seems to be bits missing as well.  The play examples at the back of the rules were pretty much essential to make sense of the rules. 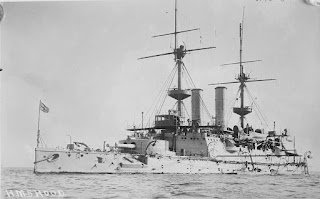 Command Rules
These are similar to Battlefleet Gothic/Epic/Hail Caesar where you roll 2d6 to pass a Command roll.  However the difference between your command rating and the dice roll determines how many orders you can give. The list of orders can include choosing speed, turns, evasive action, changing squadron formations, making repairs and firing gun batteries or torpedoes.  If the roll is over the Command level the ship simply cruises straight forward at half speed.  Example: A squadron of battleships (lead by average level 8 commander) decides he will attempt to increase to flank speed, turn 90d, fire main batteries then secondary batteries.  He rolls a '6' (2 lower) so he can carry out the first two orders but fails the last two so he does not open fire....

There are cards with the orders printed on them which you could use to record the order sequence.  I think this whole command sequence is a very clever idea and intend to "port" the command system into other games I have such as the WW1 game General Quarters 2.

There are also visibility rules which are reasonably detailed and weather conditions can change during the game.  Many WW1 battles I have read about emphasized the role of poor/miscommunication, leadership choices and visibility in deciding battles and I presume pre-dreadnought battles would be similar - in which case Coaling Stations is hitting the nail right on the head.


This video clip is, I think, from a Japanese mini series... Awesome CGI

Firing & Damage
This is done by different sized dice - d4 (12"+ guns) down to d12 (under 4" guns).  Lower scores are better.  Any firing that results in three or more 1's means you roll on the catastrophic damage chart. This solid, but nothing out of the box. I am also dubious about the historical "accuracy" of the dice percentages and damage.

However the idea for recording torpedoes interested me a lot - you mark the target with dice - as many dice as there were torpedoes fired.  The dice face records the range - so two torpedoes fired at range 3 would be shown by two dice with the '3' face up.  The "to hit" dice is determined by the range - as the gameplay example is 3 range, you'd use a d4, if under 6 range, use a d6 - 8 range would use a d8.

There's almost no paper record keeping - you could even use a d12 to show "Castastrophic" hits.

Given the examples and fairly generic template, adding in your own ships would be quite easy.

There are rules for collisions, ramming, laying smoke, and ship repairs.  I'm still a little confused with this one:
"In order for a ship to repair damage a 1,2 on a d6 needs to be rolled which is modified by the crew training of -1 for good training to + for poor training, a roll for each repair may be rolled however no rolls are allowed to repair damaged hits or items marked destroyed."   Umm - so what CAN I repair?

There are fleet lists with ships stats for the Russo-Japanese wars (Tsushima & Yellow Sea)  and examples of play which are pretty much required reading due to the patchy and unclear nature of the rules. 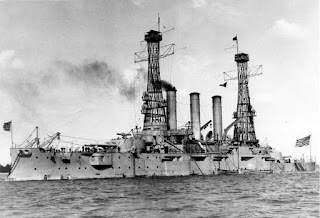 The USS Missouri... again, not the one you were thinking of....  The secondary turrets look great even if they are a bit limited...

TL:DR
The command system is clever and seems perfectly suited to an eras where command and control are problematic. For me it was worth the price of the pdf alone and I intend to graft the rules onto my WW1 GQ games. It makes crew quality and commander skill a very important factor in the battle.

I'm not 100% sold on the "different damage dice" gun method - if after modifiers you need a 4 or less on a d4 - that means you have a guaranteed hit? I don't really mind (I intend to adapt the rules for Victorian Sci fi) but I doubt the historical accuracy.  The 4+ saves seem a tad '40k' but I do like the torpedo tracking rules and the three colours of "damage dice" replacing hitboxes and ships SSDs.
Ship stats are easy to use and remember and there is little to no record keeping which is always pleasant.

The ruleset has some interesting concepts, but it is let down by being somewhat poorly explained and laid out.


Recommend? I am no pre-dreadnaught expert (my naval gaming experience is WW1-onwards with General Quarters and Shipwreck!) but I suspect these rules lean more towards Battlefleet Gothic rather than Harpoon.  I certainly like them, but mostly because I think with a few house rules they could make an awesome Aeronef/flying battleship game - i.e. I am more interested in the game mechanisms than historical accuracy.

Other options: The WTJ have the free rules Quickfire which looks to be pretty straightforward, and Those Damn Battleships Again uses the simple DBA engine and is also free. Perfidious Albion (which has an interesting damage grid) and Fire When Ready by A&A Games are very affordable.  You could own all these (and Coaling Stations) for under $30.

EDIT: Thanks to Dave, whose "Fawcett Avenue Conscripts" have a well-illustrated battle report here
Posted by evilleMonkeigh at 21:52