I need a simple set of drift rules for my grav tank game, as well as my PT boats/MTBs-in-space rules I'm working on.  I've already got a very good set of rules for vector movement I made years back; but the drift markers clutter the table - restricting fights to about 4-a-side before things got messy...

My design goal: minimum clutter, while imparting a feeling of momentum. Plus, ships should be able to flip and strafe sideways while drifting past enemies - because it's cool.

My current idea steals from Full Thrust only I've eliminated the need to track velocity and simplified it further. Loses a bit of granularity but I think it still feels right, and is fast - and sometimes needs no marker at all!

When moving slowly, a unit can move it's thrust in any direction. It can end up with any facing... anything goes.  For the purpose of the example I'm going to say the thrust is 4." 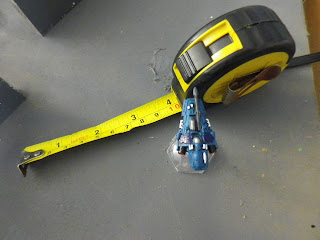 This gravtank, when moving at low "normal" speeds, can move anywhere in a radius = to it's thrust, unconstrained by facing etc. Like infantry do in most games. 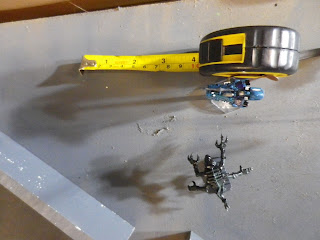 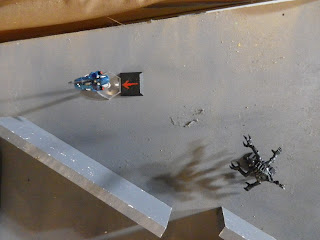 The grav tank has moved it's full thrust (4" in this case) directly forward and opts for drift marker. The marker placed directly astern of the unit's base, with the arrow facing forward in the drift direction. 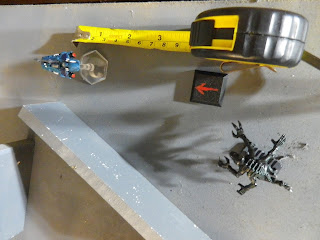 Now, at the start of it's next move, the ship drifts directly ahead of the drift arrow. It moves a mandatory distance - the same as it's maximum thrust. In this case - thrust is 4" - so the gravtank moves 4" directly forward. This is the "drift" stage, and occurs before all other movement.
(Luckily the tank chose to drift - the monster was closing in!) 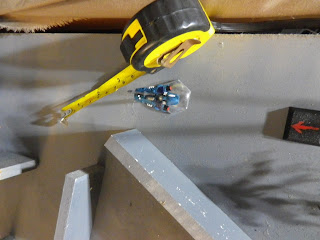 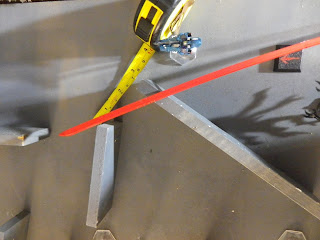 A ship's path is between the drift marker and it's new location (shown here by the red stick).
In this case, moving sharply to the left (where the tape and stick intersect) would be a bad move - the gravtank would smash into the wall! 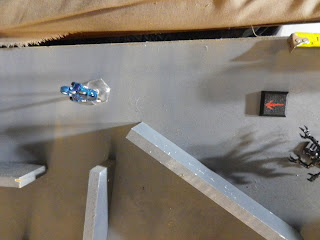 Instead, the gravtank might boost 4" further forward, getting more distance between it and the monster, and pivot to shoot at it; shooting backwards while drifting the other way!  Finally, we move the drift marker towards the back of the unit's base, in a straight line. 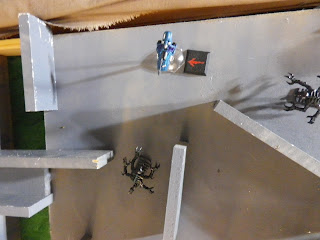 For example, the tank might have faced sideways to shoot a new threat. However the drift is still heading towards the wall dead ahead!  We need to stop drifting and slow down to more controllable "normal" speed.

To stop drifting, the procedure is as follows.  Next turn, you must move your mandatory drift distance like usual (=max thrust, in this case, 4"). As usual, you move/drift in a direct line in the direction of the drift marker arrow.  You then ensure the unit is facing the drift marker. 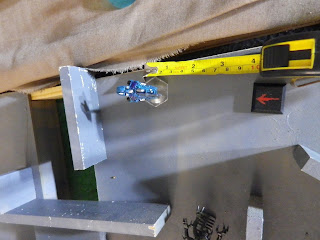 You can see the grav tank has spun to face the drift marker. This represents the unit using it's powerful rear thrusters to brake it's forward momentum.

Having braked and removed it's 4" drift velocity, the drift marker is now removed. Voila, the unit is back in normal movement mode. 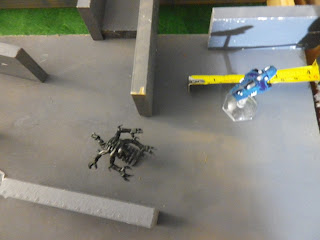 The grav tank is back at normal speed. It can now move up to it's thrust in any direction; it won't smash into the wall now!

Hmmm, so how do I feel after this playtest?

Successes
Did it remove clutter? Sure. Half the time there IS no marker (unless you are drifting).
Did it retain the "feel" of drift? Can you shoot backwards/sideways when drifting? Sure!
So it successfully met my design criteria. I'd label these rules a success.

Drawbacks/Limitations
Hardcoding the drift = thrust obviously is a bit unrealistic and loses some granularity.
Sure, you could put a dice on the base but that means you'd pretty much permanently have to keep it there - a counter + a dice permanently goes against my "minimal clutter" policy.

Ideas
Maybe you could "double boost" - i.e. follow up your first "drift" with a second full-thrust move forward to establish a 2x thrust drift (8"in this case). This would not add any clutter as you could simply use a different coloured drift marker.  You would have to spend two turns braking, facing backwards to return to normal speed....