Space Nazis has a certain ring to it, right?

In the dying days of the Reich, as Allied forces drove  hard through the heartland, a brilliant halo appeared high above the Bavarian mountains.  Operation Sternsprung had succeeded in opening a warp gate: taking the cream of their scientists and technology, die hard forces of the Reich boarded jets, flew through and disappeared.

The victorious Allies and Soviets quickly entered a new arms race; to exploit these rifts which were appearing in the skies in a range of locations.  The Cold War became a space war.  Within months, both sides had heavily modified their jets to operate in vacuum, and were exploring our Solar system, laying claim to rich mineral asteroids.

In the vastness of space, far from the eye of the public, Soviet and Allied forces clashed in small skirmishes, as the power blocs sought to assert sovereignty over valuable chunks of rock. Space bases were built.  Soon, big corporations moved in. Protected by their own national governments and increasingly, hiring private mercenary air forces using surplus jets, the asteroid belt quickly became a "wild west" where disputes were settled with jets and cannons.

...and increasingly, outposts and bases have been destroyed with no survivors. Tensions between superpowers escalate, but - has the Reich returned from the depths of space? The last Nazi outpost in Antarctica fell in 1947, but there is speculation it was in contact with other German forces through the Argentinian rift... 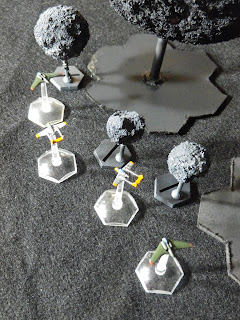 Modified Vampires clash with Horten Ho.229s around an asteroid belt. 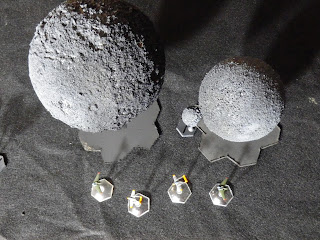 The planets and asteroids were simply styfoam balls, dipped in a water+PVA mix, then sprinkled with sand and spraypainted.  They took about an hour to make, even with frequent interruptions by my kids... 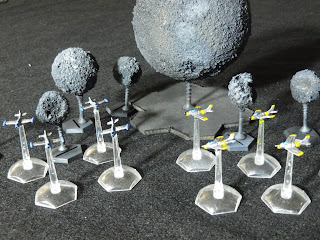 American forces; radar-equipped Sabres and Thunderjets armed with rockets; including "rock cracker" asteroid-killing nukes. Many older model jets have been sold off to private contractors. 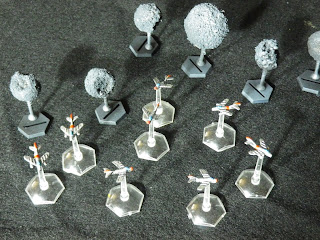 Soviet jets not only equip their own vast space armadas, but have increasingly found their way into the hands of satellite nations and rogue states. The Communist threat has spread to the stars! 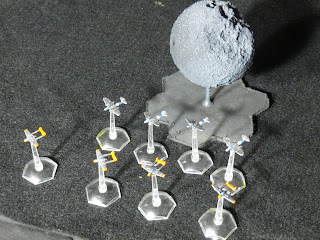 Meteors and Vampires were amongst the first jets to be modified for space use; with advanced life support and thrust-vectoring nozzles among key changes. 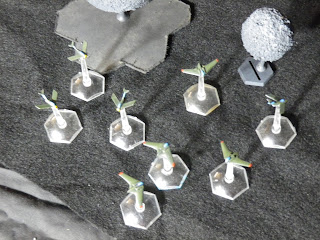 The menacing Horten flying wings battle alongside the Ta.183s who replaced the Me.262. These models are Raiden, and they are much finer cast models. Sadly, they are inferior to the chunky robust detail of Tumbling Dice and I prefer the latter, both to paint and at tabletop distances.

These models and asteroids will serve to test my "Vector Strike" homebrew rules.  Sadly there are no actual modern jet rules I like. Check Your Six is too fiddly (and screw written orders!), Bag the Hun is too jumbled (I swear it uses 100 different game mechanics); neither allow me to use 4-8 planes per side.  Hmm - might be a good game design article: "genres that defy good rules" - (aerial rules and age of sail spring to mind - I've never found a good set and the subject matter seems to defy ease of play) as opposed to genres saturated with decent rules (platoon level WW2-modern-sci fi, for example.)
Posted by evilleMonkeigh at 04:09