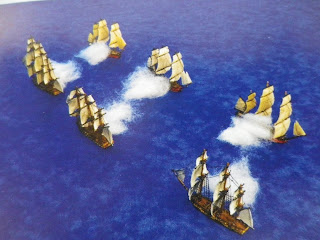 A typical Osprey, Fighting Sail has a good mix of colour photos and pictures.

Fighting Sail tries to capture the "feel" of age of sail without the book keeping.  It aims to allow squadrons and fleets rather than 1v1 ship duels.  It has a hint of old-school Warhammer about it; if you hated Trafalgar and Man O War, you are unlikely to approve of Fighting Sail, which is a streamlined descendent; where the odd damage counter is the most book-work you will need.

It is interesting as the victory conditions is to reduce the morale of the entire enemy fleet. 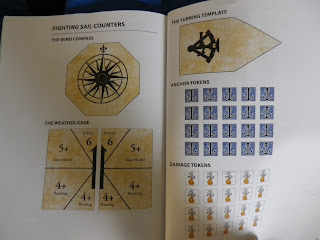 Templates and counters are in the back of the book. Old school!
The Shiny
Fighting Sail is an Osprey book - and all it entails.  Decent pictures, photos and illustrations, standard softcover 64 pages.  A quick reference and photocopy-able templates are at the back. The index isn't great but the book is so small you barely need it. Not a lot to add.  As usual, the price point ($15) is good and makes it hard to criticise.  The author is evidently enthusiastic and includes background info to "set the scene" at the start of each chapter.

Barrier to Entry
A handful of d6, some turn/wind templates (found in the back of the book), and 4-5 colours of tokens for damage, cannon, anchor which is all you need.  As for ships: I regard them as playing pieces, not elaborate models (rigging them with thread etc = sadomasochism) so I recommend Tumbling Dice's 1:2400; they are sturdy and cheap at ~$4ea. 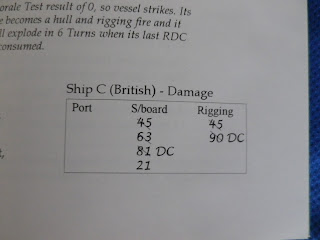 Even in Langton's "Fast Play" rules, you can subtract literally hundreds of hit points in different locations... 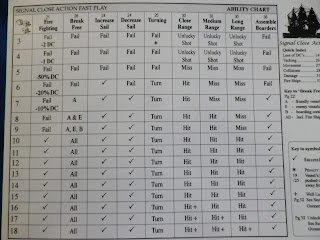 ...and consult charts.  If you love this sort of game, then Fighting Sail - with its odd token to record damage and minimal bookwork - will not appeal to you. Games can occur in an hour, rather than a day.

Movement
You have wind template to check the ship's angle to the wind. This matters, as each ship has "Sailing Points" - the amount of dice you throw, or "potential" speed.  The success chance depends on the wind angle: a agile frigate might have 5 Sailing Points. It rolls 5d6.  If it is reaching, it gets 2" movement every 4+ rolled.  If it is close hauled to the wind, it might only get a 2" each 5+; if in irons a '6' might be needed to move...    Ships can tack or wear; using a template provided in the back of the book.  There are rules for collisions, entangling, grounding etc as you'd expect. 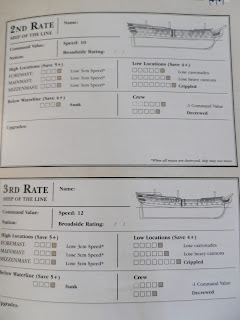 A high roll can cause an "explosion" or critical hit - short range fire causes explosions on 5,6 and medium range on a 6. An "explosion" causes a hit and you get a re-roll.  Normally you only get one re-roll, unless it is raking fire, in which case you can keep rolling as long as you get explosions.

Squadrons of 2-3 ships can combine their fire under the right conditions.

Boarding combat is pretty quick and simple; both sides roll 4+ each boarding dice, and if the attacker wins he captures the ship; if he loses he is beaten off.

Check the combined hits and consult a list; a single hit might just "disrupt" a ship's sailing ability; all the way to five hits that can cause catastrophic sinking damage.

Hits also cause damage to fleet morale; even if the ship itself is not sunk. This makes sense, as in this era ships were more likely to flee or be captured rather than decisively sunk. I like the focus on morale as a victory condition.

Ships can attempt to repair damage (remove a token). Accumulated damage can also cause a ship to strike as well as halving gunnery and sailing points etc.

A criticism: I think the damage section is the only area I had to re-read to understand; I think key info was spread over too many pages. 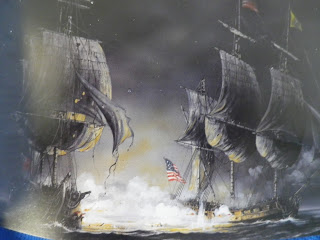 It's nicely laid out, but I'd have preferred less illustrations and some campaign rules added...

Morale
This is very important - morale is 10% of the fleet's total VP value. It can be lost through damage, sinking ships, boarding, collisions or capture - the latter is the most vital as captured ships ADD morale to the capturing fleet. Once morale reaches 0 the player loses.

Weather & Special Rules
There are "advanced" rules for weather, grounding, fog, squalls etc which are so straightforward they might as well have been part of the main game. There are rules for shore batteries, fireships, bomb ketches and multi-player games.

Fleets & Scenarios
This has a vibe of "40K army list" - you must have a commander, and you may have x amount of points to spend (Ships cost points: ~100 for a 1st rate, down to ~20 for a frigate.) Admirals and captains may have special abilities; a "Disciplinarian" or "Gunner" admiral can automatically pass a Morale roll or get an extra broadside once per game for his whole fleet.  There are also captain skills for individual ships:  a; a Navigator can re-roll '1's on sailing dice, and a Marksman can do the same when firing cannon.  There are also "legendary" captains and admirals with unique traits, and even some legendary ships such as the Bellerophon, Constitution or Victory with their own special rules.
Even fleets like Russia and Portugal are included.  There are six missions or scenarios ranging from protecting convoys to blockades to pursuits. 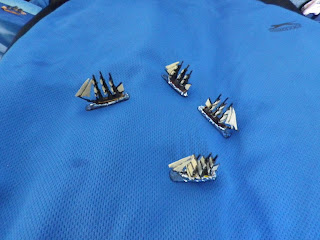 Tumbling Dice are my go-to brand for small scales; they are designed as gaming pieces first and foremost; they are very sturdy, practical, and have exaggerated features that "pop" well at tabletop distances.
No campaign rules....
I really feel these rules would work great as a campaign, and I really felt their absence. The 64-page limit of Osprey probably is an issue here, but there was plenty of stories and background info included; surely even a simple campaign could have been squeezed in. I really feel this was an opportunity missed - my first reaction after reading the rules were "this would work great as a campaign...  ...oh, phooey." 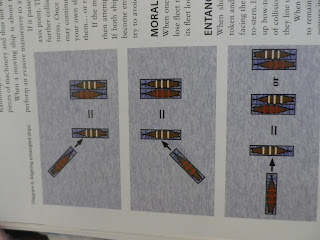 The rules are simple, but there's still plenty of examples to show what is intended...

TL:DR
It has a definite "old school GW/Man O War" vibe and I'm sure age of sail pedants purists will find something to nit-pick, but it's a very playable set of rules for this era, without the book-keeping and fussiness that plagues most non-boardgames rules from this genre.  I found myself comparing it to GW's Historical's OOP Trafalgar - but Fighting Sail is much more streamlined than its forebear.  I'd say it's two biggest flaws are that the streamlining would make 1v1 duels a bit dull (the focus is squarely on fleet/squadron actions of say 6+ per side) and the lack of a campaign.

Recommended: Yes.  I'm actually painting my 1:2400 sailing ships at the moment. The other rules I've played I was content to try once with bare metal ships, and then quietly shelve.
Posted by evilleMonkeigh at 15:08