Having played a fair bit of War Thunder recently, I was bitten by the tanking bug - I dragged out my 15mm tanks and a revised version of the homebrew rules I'm experimenting with.

I want basically tank-Necromunda; where teams of 8-12 tanks (mix of recce, medium, heavies and TDs) can play a series of skirmishes in a campaign and "level up" their skills (and sometimes their tanks.)

What am I playing?
With this in mind, the rules are simple and GW-y; 3+ to hit up close, 4+ normal, and 5+ long on a d6. Tanks get 2 shots; or can "sprint" a double move without firing. There's a bit more to it, of course; my main interest was the damage and damage charts, shots that beat the target number by two knock out the tank instantly; i.e you need a 4+ and roll a 6 = instant knockout.   Once this occurs there is a table, basically
1,2 = mobility (engines, tracks, driver etc)
3 = gun/turret/gunner/loader
4 = explodey burney things
5,6 = squishy crew
The tank is tagged  with the effect, some are resolved instantly; some can be "fixed" the next turn or at least used in a damaged state (i.e. a mobility hit can be repaired, but tank speed is halved).

Basically, similar to GW ripoffs like FoW or Bolt Action, with a bit more detail given the tank focus.  I did not use any spotting rules but they exist in the draft rules; they take the form of "autospot" ranges.  I can probably post the rules up here if there is interest but they usually go in the google group.

Turn 1
The first turn was a long range exchange of fire between the two forces (Pz IV with short 75, supported by a StuG with long 75; against Cruiser 2pdrs supported by a Grant); the Grant was stunned (caused by a non-penetrating hit) while a PzIV was immobilized. The range was beyond the 20" (1000m) effective range, so 5s and 6s were needed to hit; and penetration was correspondingly reduced. 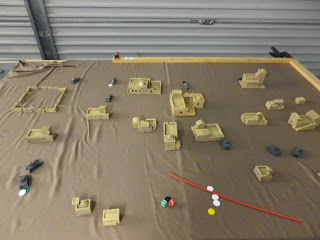 Turn 2
The Stug III's long 75 drills through a hapless Cruiser IV and it explodes.  First blood. 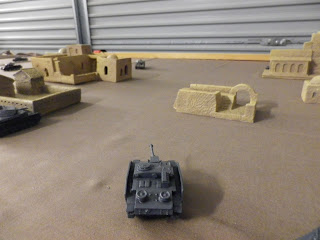 On the other flank, tanks exchange fire but surprisingly the armour holds up - lots of crew stuns from non-penetrating hits (which need to be removed by a "crew check" of 4+ next turn; or else -1 to all rolls). 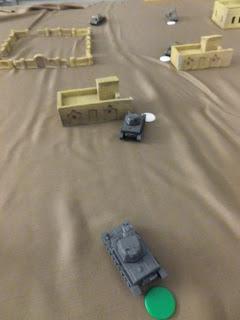 The activation is supposed to be "each players take turns activating a tank" but you can follow-on and move again if you pass a Crew Check (4+); stunned units cannot "follow on" like this.

The teaboos strike back; a Cruiser angles a shot through a gap and takes out a Pz IV. 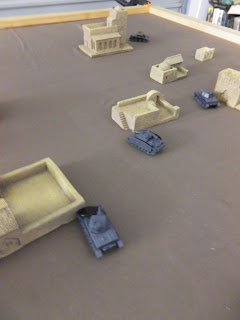 Turn 3
Back on the other flank, a luckless Panzer is stunned, immobilised, then knocked out. The Grant does some good shooting with its dual cannons. 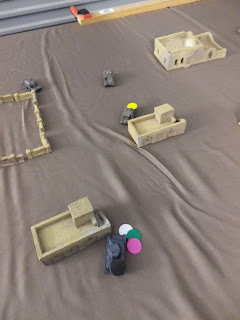 A speedy Cruiser flanks a Panzer on the other side of the battlefield. It is immobilised and set on fire. 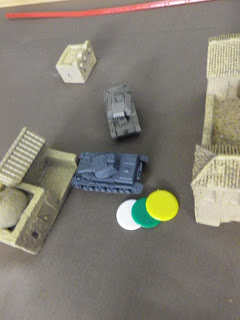 Turn 4 & 5
The burning Panzer from the photo above brews up; the crew had already abandoned the tank after failing morale and firefighting rolls. 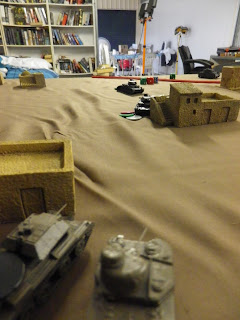 Back on the far flank the Grant continued its stellar display; the rear Panzer was limping to cover (with mobility damage sustained in the first turn) when shots from each gun rolled '6's.

The StuG  moved to the middle where it ambushed a Cruiser on the opposite flank; however the Grant escaped by moving into cover of its burning wreckage. 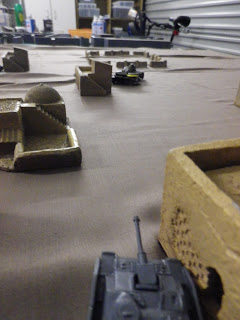 While the Cruisers used their blazing speed to flank, the Grant backed up and whacked the StuG through the front armour. The lethal '6' is displayed next to the German assault gun. 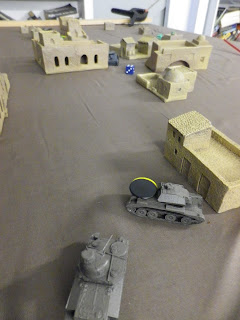 Thoughts and impressions:
The mechanics were pretty easy.  Activation was a bit to easy to "chain" i.e. one side could activate almost all tanks in sequence like traditional 40K  IGOUGO - but as tanks got stunned and damaged it became more chaotic; which I guess makes sense.  Shooting ranges (10" short, 20" normal, 30" long) worked OK on the tabletop. It got a bit to hard to track which tanks had already activated; which might be an issue when I play up to 12 a side (the upper limit of the rules).

I deliberately placed cover every 10" (~500m) so tanks could engage and move up to closer ranges without it being a long-range gunnery competition from the starting positions, and I think this helped the gameplay a lot.  It would have been a very boring game on an empty flat tabletop or the "traditional" one with 2-3 pieces of cover.

I'd like to look at the damage tables a bit more (i.e. how often do crew "bail out"? it seems like quite a lot, historically).  Also, with tanks that were relatively balanced (PzIV vs Cruiser; Panzers had better armour, Cruisers were much faster) kills/hits seems OK, with quite a few glancing shots at long range, becoming deadlier up close - but with a vastly more powerful gun (75mm StuG) the game could be too deadly?  It could one hit kill the Cruisers comfortably from long range, which I suppose is pretty accurate, though I think I'm more interested in fun "balance" rather than super-historical-accuracy.  Tanks get 2 shots per turn, which "smooths out" the dice a bit i.e. 2 shots to hit/damage makes damage a bit more predictable.

The ground scale (tanks moved between 3-6" at combat speed, and 6-12" when sprinting) were balanced against traditional wargame gun ranges (8-10" close, but 16-20" effective, 24-30" long) which feel a tad short.  If I added in spotting rules I could increase gun ranges (perhaps to 32-40") as I could use spotting rules to avoid long range gunnery dominating.  Technically I feel the guns should always go across the tabletop; but I wanted some benefits for say a long 75mm vs a 2pdr, and having a hard-coded maximum range is one way to do it.
Posted by evilleMonkeigh at 00:26