An interest in CCGs was sparked by a visit to a local game store.  I raised an eyebrow when gamers bought half a dozen $20 packs at a time.  (I live a sheltered life, OK!)

The fact they were trading Australian dollars for pieces of  paper/cardboard - which themselves were assigned a "value" by the company (and the players themselves)...

I was thinking  "Wow.  WoTC have a "currency" all of their own!

A quick google later and I was listening to The Curse of the Black Lotus.
It's a 15min audio. Go ahead and listen to it.

For the lazy bastards amongst you (i.e. the ones who ask me to review free rules - seriously, guys, it's free - download it and read it yourselves!) here's a quick summary. 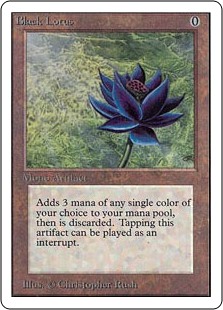 Apparently one sold recently for $27,000....
The "Bubble"
There are "fads" like beanie babies.  These fads or or "bubbles" have stages.
The first stage is "this is cool."
The second stage, people realize there is money to be made reselling the "fad" item.  They are "speculators."
The third stage is there is an oversupply and the market crashes, and everyone moves to the next fad.

Magic the Gathering
Designed by math graduates, the cards were sold in packs ($3 back then) and occasionally there was a rare card. Kinda like buying a lottery ticket.

WotC was selling pieces of paper that people decided were worth a fortune. Speculators would buy decks by the truckload looking for rare cards.  Some at WotC wanted to ride this craze and focus on rare cards.

However Magic is also a game. A cheap fun game to play with friends.  However, these rare powerful cards were messing with the game itself.  I mean, it's like being able to buy extra Aces in a poker game.  Was it worth cashing in short term?

The math guys at WotC graphed the life cycle of a fad to see how long they had before the inevitable  "crash."  About a two year time span. The math guys suggested they make Magic sustainable, instead of cashing in short term for millions.  Make less money now, but make it last 5 years, or 10 years.  To deflate the bubble in favour of a longer-lasting game.

Deflating the Bubble
So in 1994-95 they pumped out a slew of new card sets.  Lots and lots of them.  As they flooded the market, speculators would now no longer touch the new sets.  The WotC guys actually went out to shops. If the cards were selling for above RRP, they'd simply print out more and more. Until even the most stubborn speculators realized they had been devalued.

Now the old rare cards were still so powerful they unbalanced the game. And printing out new overpowered cards wasn't the answer either (and risked enraging the player base further).

Banning them didn't work. So they invented a professional Magic league.  (Ok, I was also amazed people would actually watch this... nerds!) where they could set the rules for allowed cards/decks.

Players could still use their old cards. But to play like a pro, you had to use the new cards. And it worked.

Long Term Sustainability > Short Term Cash Grab
WotC learned their lesson.   They knew not to print out more powerful or even simply flashy cards.
Swords, angels, wings, dragons, battles - are all popular.  So you'll never see a bat winged angel wielding a sword of doom while riding on a dragon!


22 years on, Magic is still going strong, balancing gameplay and collectability. In fact least year was their best most profitable year ever.  Thumbs up to long term economic planning.

I wish our politicians were as good at managing economies.

This is probably nothing new to the geekier lurkers on this blog, but I thought it might be interesting for the rest of us, who only dabble on the edges of the CCG ocean...
Posted by evilleMonkeigh at 22:56