I commented here that I cannot see many wargames (apart from Helldorado - but they're French!) with an explicit focus on either Christian or Judaisitic myths.  I thought it was surprising due to the widespread awareness (or not?) and relatively rich background material. Some commentators suggested it was still a sensitive/controversial topic. However, a quick google showed RPGs have less "squeamishness" if that is indeed the case. Which kinda surprised me, as I recall the RPG community were involved in some controversy from various groups in the 1980s.

Anyway, I'm interested in this topic as a source of good background material for "modern pulp" that's a bit less cliche than anything involving vampires or werewolves.   Here's some I came across.  I'm giving my 10c with regards to potential for wargaming backgrounds/skirmish gaming inspiration, as I have 0 interest in pen-and-paper RPGs. 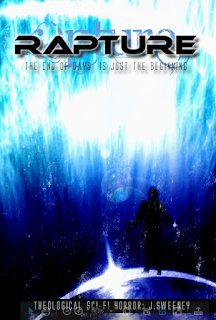 
I now have...
Pandemonio
This is a "pay what you want" at Drive Thru RPG.  It's two books - Dread and Spite.  It's less angels and demons and more horror-splatterpunk-noir.  Kinda like those old hard boiled detective novels with disgusting stuff thrown in.  An unhealthy obsession with tentacles coming out of lady parts.  It tries to be "hardcore" but comes across as merely try-hard and tacky.

Rapture the End of Days
This is interesting, supernatural with a hard sci-fi seasoning.  Basically, the End Times have come and Earth has been destroyed.  However, overlooked humans remain on the space colonies and stations.  And the legions of hell are loose. There are nation blocks, corporations, and religious factions and cults.  Possession, spirits, hellspawn, undead mixed with hard sci fi.  It it was a movie, it'd be Alien meets the Fallen, Diablo with a touch of Cthulhu and the hard sci fi of say the 2300AD universe.

Seventh Seal
Ordinary humans "Sentinals" are imbued with angelic powers in the final battle between Heaven & Hell.  Sentinels belong to various angelic orders with different traits and powers.  With Graces, Divinities and Blessings it embraces a different "magic" system.  It has a clear Heaven v Hell orientation, despite humans being the primary players.  Quite a lot of skirmish wargaming potential and a solid "magic" system. 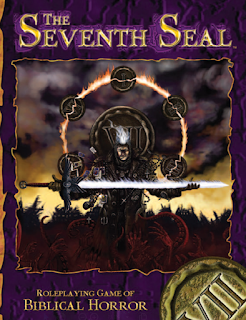 
I don't have, but I'd like to try...
In Nomine
This is the only "Angelic" game I was originally aware of before I began my hunt.  It's an old 90s-era Steve Jackson game, with a Heaven/Hell Cold War being waged between angels and demons.  Sounds interesting but at $24 for a pdf it can wait.

Demon: The Fallen
This White Wolf title sounds interesting.  Due to an upheaval in Hell, lesser demons are able to escape.  They must cohabit  suitable host body (which has effects of its own) but have found the heavenly host have vanished.  The competing factions of fallen have interesting wargaming potential.  Again, a pricey $25 rulebook keeps this on the wish-list only.

The End: Lost Souls Edition The good have gone to Heaven.  The unworthy were cast into damnation.  However some humans abstained from either choice - and they are the "meek" who inherit the Earth. Poor buggers.  It wasn't a promise. It was a warning.  At $18, I considered it - for a moment.  Nah, I'm waiting for a special. 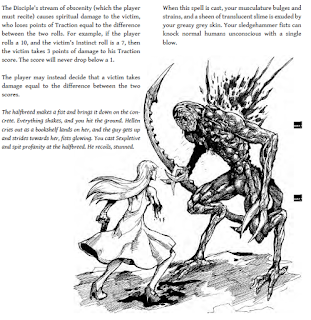 Pandemonio's gory approach tried a bit too hard, and was more "Raymond Chandler with tentacles" than theological...


Somewhat relevant - I could be talked into trying...
Nobilis
This dabbles in mythos beyond angels and demons, tends to focus on demigods, and from what I've read tends to have uber super-powered characters and philosophical navel-gazing.   Also it's $20 so that's a no from me.

Armageddon: the End Times
The final battle has begun.  Has angels, demons, but also old pagan gods - and the battle is against Cthulhu-like beings rather than the traditional Heaven vs Hell.  Again $20.


PDF Rant
What the heck is it with these overpriced PDFs?  $25 for an electronic file? There's no frickin production cost, as it must cost cents (or fractions of a cent) for the actual download.  The PDFs cost more than most hard copy books. And if you want to print them out, you can have a crappy B&W or pay through the nose for a proper print job.  It just does not make sense.  Do they want people to pirate them?

A PDF is the price of a new-release hardback novel at my local bookstore.  Why so much?  Osprey seems to turn out nice hard copy rulebooks for half that.  Not to mention the comparison to videogames - where $25 gets you a lavish blockbuster production with 100-man design teams taking tens of thousands of man-hours; you're expected to pay the same for a type pdf?

Whilst some appear to be rebadged vampire/hunter fiction (Demon: Fallen, Seventh Seal) of a Supernatural vein, others are more straight horror than Biblical/Thelogical horror (Pandemonio) or simply include the themes as part of the overarching backgound rather as the background itself (Nobilis, Armageddon).  That said, there was some interesting fluff, especially the sci fi Rapture, which has a lot of applications for wargaming.

There's plenty of background material to make very structured bestiaries, and "magic" systems which follow different paths than the normal fantasy tropes. There's potential for spirit/material world crossovers (it would be cool to have a "spirit world" gaming table). Some have "sanity/faith" counters a la Cthulhu while the focus on possession allows you to rebadge humanoid forces, 40K Chaos-cult style.   While the topic is perhaps not for everyone, as I suspected, there IS a lot of useful "material" for wargaming there and I plan to investigate it further...  ..if the damn pdfs go on special any time soon...

Anyway, if anyone has tried the latter five I don't own, I'd appreciate their feedback - how useful would they been for a wargaming background (i.e. factions, "magic"/faith system, backstory). Also, did I miss any RPGs of this ilk? Theological "fluff" seems to be a more popular RPG topic in comparison to its relative obscurity in wargaming circles.


Psychic Horror, anyone?
I'd like to do a similar exploration of RPGs including psychic powers - with horror themes similar to the STALKER/FEAR videogames, so if readers have any suggestions in this field, I'd appreciate it.
Posted by evilleMonkeigh at 08:03