Usually I don't do a stand-alone review of a book, unless it really catches my attention, like Traitor's Blade or Retribution Falls.

This is one of those books.

Lately the Hugo sci fi awards have been tainted with controversy, with a voting block forming, accusing others of bias towards literary works, as opposed to entertainment. (I.e. the one high brow artsy types like as opposed to the popular sort people actually read), and "affirmative action" voting - i.e. voting to make an intellectual/ideological statement. I'm shocked! <sarcasm off>

Well, Ancillary Justice was written by a woman, and a noticeable amount of military characters are female of a gay persuasion.  However that has no bearing on the story (and is not shoved in your faces like most TV shows).

Ancillary Justice simply won all those awards (Hugo, Nebula, Arthur C Clarke, Locus etc) because it is a great book.  In fact, it's the best sci fi book I can recall reading since...  old school stuff stuff like Ender's Game and Dune. 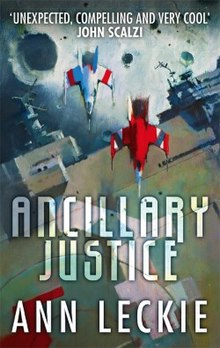 Ancillary Justice is one of the best sci fi books I've read. Period.

Why you'd read it:  A soldier is on a quest for vengeance.  She was once the AI of a massive military starship - the Justice of Torren - and an act of treachery has reduced her to inhabiting a single human body.  But that may be enough to bring down an empire.

The AI-in-a-human-body concept is very both well-handled, believable, and oozes cool.  The "ancillaries" (mindwiped humans controlled by AI aka "corpse soldiers") are a concept that would translate well to the gaming table.  There's lots of gaming inspiration of a hard-ish sci fi bent.

Leckie does a great job of world-building a culture which is built on expansion, where class systems define careers,  and where AIs are prevalent - a single mind can occupy multiple bodies.   What appears to be a simple, cliched revenge tale is far deeper than it appears, and the dual plotlines (the present and 19 years in the past) converge and combine to peel away the layers of the story.

Whilst you can see it is leading on to a trilogy, it can be read as standalone.  In an age where editors let their charges ramble for 800-900 pages without getting to the point, Ancillary Justice tells a great story in 380 (which I read in one sitting!), without ever feeling like it is dragging or dawdling.  I'm getting the follow-up book Ancillary Sword next time I'm in town.