Diary of an Average Painter #3: An Ode to Confrontation (the metal ones, of course!) + a rant

As part of my pledge to buy no more new minis until I have painted equal or more of my backlog, I went digging through my lead mountain for something interesting for my "daily handful" of minis to paint.

I found a box of OOP Confrontation minis and started on some characters which will work for my Weird West/Pulp homebrew rules.  The game has never been played locally but I loved the minis - I think they set a standard when they were released, a little like how Infinity raised the bar when they came out. 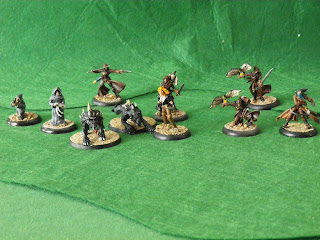 There were a few interlopers; the hellhounds are Heresy and the monks-with-guns...  ...I have no idea, they just looked easy to paint.  The yellow-haired chick is a "touched up" Mage Knight clix and I re-painted the trenchcoat an old Malifaux model on the right. 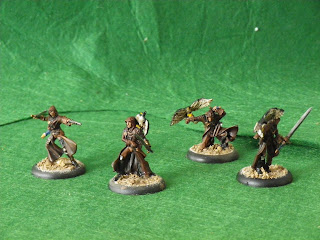 They came on square WFB-style bases but I hate them and gave them my favourite PP lipped bases instead. These Falconers of Alahan are a bit bland but I am deliberately picking models that are not too "fiddly" to paint. Perhaps I should have done lighter tan cloaks in an "Assassins Creed" style.

Correction, I was wrong; they are not OOP any more...  ...and if prices are anything to go on, I am sitting on a fortune.   They are in the Cadwallon Store and also CoolMiniOrNot.  Huh.

There's a good website that identifies the minis - skimming through it, I covet almost all the minis. They have so much character!

Confrontation metals are a little odd in scale; they vary between chunky models that fit beside Warmachine and Warhammer and slender, delicate sculpts that make Infinity models look rotund. I find it a little annoying - I've got a tackle-box full of Cynwall elves that don't really work for my project (which mixes them with Malifaux and Warmachine). Many of the Griffins and Lions of Alahan are a bit too slight, as are many of the Alchemists of Dirz.

On the other hand, the Kelt Sessairs and Wolven fit perfectly with Warmachine Circle of Orboros and indeed could double as (imo far nicer) models for that range.  I also plan to pain the Orcs as they are full of character - I plan on painting them a brown scheme or even red (like an Oni) as I've always hated stereotypical green orcs. Who first made em green? Green makes no sense.

Maybe I should sell some of the thinner mini lines off... or trade them since I am now impoverished in hobby funds. They must be worth a small fortune now.

The rules were a bit too fiddly for me to get into but had some interesting ideas, that like the minis were ahead of their time.  Funnily enough, I think if released now (in the era of boutique skirmish games) the Confrontation game (rules and metals) would be a big hit.  Instead we get Kickstarted random stuff we never asked for (some games, with dodgy rules and fugly mechanics should have been allowed to die peacefully the first time)

Rambling Rant: Seeing these OOP minis and the sad demise of this range (shakes his fist at prepainted plastic advocates) reminds me of the whole "no one plays that mini game as they are not supported" cr@p.  Fair enough if you can no longer buy the minis or rules, but discarding a game. ..."because it's not supported" in the sense they are not pumping out dozens of new minis/codexes/expansions/supplements a year? Shouldn't games be played because they are good, and fun?

Minis do not suddenly become incompatible with a new OS like videogames. You don't say "oh, my Battlefleet Gothic minis do not work with Windows 10 or Android Jellybean 11.1"   They're freaking chunks of metal. If looked after, they will outlast your lifetime.  Rulebooks are only obsolete if you decide they are. I quite like complete series/lines (in both books and minis) - it means I can "catch em all" - and if I like the setting enough...  ...well I'll collect another faction.

I have perhaps 1000 unpainted LOTR minis I picked up off eBay for ~$300 (includes rare metal heroes, trolls, ents etc) because LOTR was not "cool" at the time (it was the lull between LOTR and the release of the Hobbit) and was perhaps seen as a dying system unsupported by GW.  I mean, as long as they are selling the minis and the rules...   ...how much more "support" do you need?  It's not like the rulebooks self destruct after 10 years.  With the release of the Hobbit they suddenly jumped to be worth thousands...

People might get "bored" of the same thing?...  ...but this is not videogames.  The average wargamer might play once a week (if they are lucky); I suspect most would be less frequent than that.   A PC gamer might rack up dozens of games in a week. In World of Tanks I notice many players (probably half!) have 5,000-10,000+ games played...  ...admittedly rounds are shorter (10min) than wargames but how many wargamers play with a faction army 100 times, let alone 1000? The percentage would not be high.

I'd be curious how long a wargame would last if it was marketed as "complete" with no rules or expansions planned.  I bet not long - even if it had great rules and extensive miniature lines.

I know "Oldhammer" (playing old GW editions) is hipster but I'm just irritated with how a good game can be discarded as "unsupported" just because a company does not frantically pump out new content.  It's like DLC in videogames.  If people can't throw money at it, it has no value?

*Shrugs* Well I can't wait til the Hobbit is viewed as unsupported so I can afford to complete my collection. Just need those Haradrim raiders.... 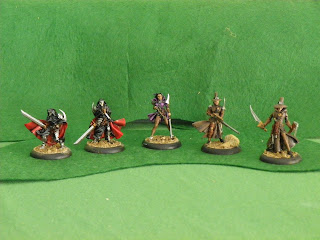 These guys will be witch-hunters in my homebrew rules. 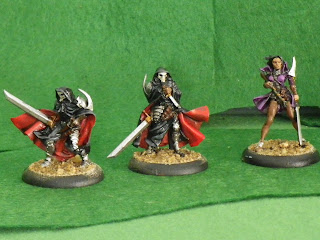 These guys were just asking for a V for Vendetta paint scheme. When you paint expanses of black, I suspect you are supposed to put on lighter layers gradually. I just sprayed it black, swiped some grey on the raised bits and called it a day.  This makes them look weird up close, but they look fine at tabletop range.  Likewise the rather contrasting light purple highlights on the female. 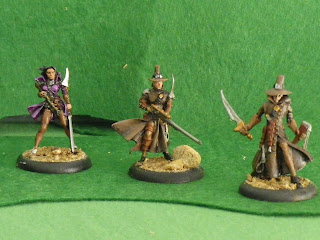 These witchunters in contrast are more muted; they look more realistic close but more like boring indistinguishable brown blobs at arms length. Some aggressively light brown highlights on the crease of their robes/hats would make them more "in line" with the previous models. As usual, I do as few washes/layers as possible (i.e. either a wash OR a layer/drybrush) and use no more than 5-6 colours maximum.
Posted by evilleMonkeigh at 15:06