I'm both feeling sick, and also flooded in (it's Queensland, cyclones are inevitable - I'm talking a 10m+ river rise). So I'm quite productive paint-wise, as I am too crook to do outside tasks (like mow my ankle-length grass), but just OK enough to listlessly paint some rank and file to a mediocore-yet-table-ready standard. Next, the final 12 wood elf rangers meaning I've done the whole box. Some were repaints from my earliest ever painting efforts from ~15? years ago. Heck, this blog dates back to 2011.  I still have half a dozen elven heroes to paint but I'll save those for when I'm more alert/coherent. 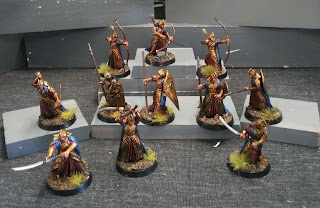 Finally, the final 12 Galadhrim. I tend to paint in multiples of 12 - basically it means paint has dried sufficiently by the time I return to the first model in the queue, and with my casual speedpaint style (base+wash+highlights) I can finish 12 all in an hour or so. It's a manageable 'chunk.'

So these 48 miniatures means my 2022 total painted now stands at 116 after only 10 days.  It's probably not a lot to the masochists suckers dedicated souls who paint regiments of Napoleonics, but for someone like me who only plays skirmish games with under 20 per side, it's a fair chunk.

My LOTR lead mountain of 500+ minis has has a significant bite taken out of it.

99% DONE: My elves, uruks, dwarves and goblins are pretty much completed save the odd hero or monster.

WORKING ON: Mordor and Gondor are halfway- I have 40 or so painted of each but another 40 each to go. They are functional, painted armies though.

HAVEN'T TOUCHED: I have a metric shitton of Rohirrim (20+ cavalry, 60+ foot) and a bunch of Easterlings (~80 various). I did watch Two Towers last night for inspiration so there may be some movement on the Rohan box. If only the LOTR wasn't shot with that bloody blue-green tint so I could actually see the colours....

As I'm feeling sick and un-alert, I'm not doing any playtesting, game design analysis etc lately. However I DID buy the new Middle Earth: SBG core rules for $70AUD (a steal as they are usually $98AD) which arrived before the floodwaters.

It's weird that GW does not take the cake for most stupidly overpriced thing I bought all holidays - that'd be a $35AUD Killwager PDF. An incomplete PDF at that. Early access comes to tabletop wargaming - yay. That's teach me to break my 'no PDF is worth more that $10' rule.

Anyway, I doubt any blog readers have never encountered LOTR:SBG - even as GW's redheaded stepchild it's bigger than 99% of other indie company releases - but I could do a review if anyone is interested. If only for the novelty of hearing me praising GW - I believe it's the best rules GW has ever produced.