This is another ruleset helmed by Andy Chambers, who impressed me with Starship Troopers/Battlefield Evo but less so with his direct-LOTR-ripoff horror skirmish Empire of the Dead.

Bear in mind this is not a fully playtested review, as although I have already bought a few of the lovely FFG DUST walkers for the similar-themed Secrets of the Third Reich, the plastic-y infantry minis are a bit "meh". So I am reviewing these rules with the premise "is it a worthy replacement for SOTR?" 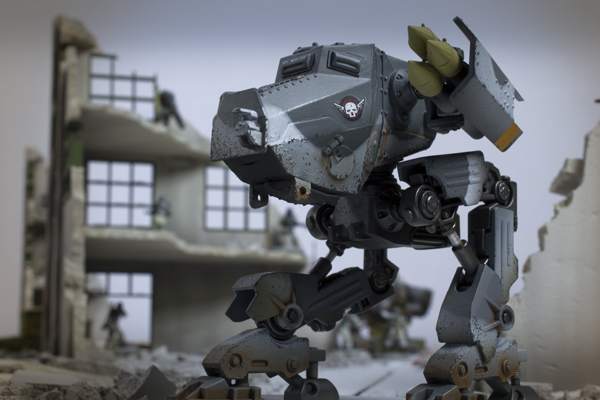 The mecha are awesome - the infantry, less inspiring
The Shiny
As expected the rulebook is pretty nice.  There are lots of pictures of miniatures; the walkers in particular are eye candy; there is a "alt history" fluff piece for the first dozen pages. I would have expected more art (Paolo Parente) but the lavish mini pics compensate pretty darn well. They even make the rather dodgy bendy-plastic infantry look good.* The rules are easy to read and pleasantly laid out. There are markers and a weapons reference sheet at the back but they you'd have to photocopy them, endangering your beautifully bound hardcover book; there is no "quick rules reference" but they wouldn't be missed.  Index and table of contents are par for the course.

*Note: The infantry aren't AT-43-style pre-paints but they are molded to integral bases and give me a feeling of dollar-store plastic army men. I find them totally unappealing compared to, say, even the pulp-y metals from West Wind but YMMV.


Stats and Stuff
DW uses d6 "combat dice" - with two "hit" and four "blank" sides. Basically, d6 with 5s and 6s hitting, only you gotta buy their fancy dice for it. I've always found special dice a bit of a turn-off, but the overall method is similar to the GOALSYSTEM rules which I liked. Pre-measuring is sensibly allowed. Having your bullets magically rendered harmless if an opponent is 1" out of range always seems dumb to me.
Stats are simple:
Movement this is usually a universal 6" - a 40k simplification I always disliked
DC (damage capacity or "wounds")
Type (Infantry falls into types 1 to 4; 1 is normal helmet+fatigues; 2 is flak jackets, 3 is heavy armour and 4 is extraordinary protection). Vehicles range in similar fashion from 1 to 7; 1 being a softskin truck and 7 being a land fortress.

Weapons have a simple but rather long stat bar that shows Range, but also Combat Dice rolled, and Wounds inflicted per hit against any type of target (infantry or vehicle).

Units have a 6" cohesion range from the leader - nothing new here - and can promote a new leader if one is lost. Weapon ranges are also very "40k" and are quite short in scale to the models. I personally think a tank gun should fire further than 36".... 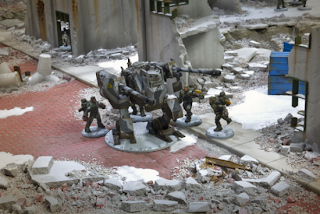 
Game Sequence
This looks promising. The sequence has been split into a "Command Phase" - where command units can order units within 12" to take unopposed actions; and the "Unit Phase" where units use their own initiative and can be reacted to by opponents.  Basically a two-stage variation on IGOUGO.

Both sides roll a "combat dice" (cd6) for each functioning unit. Each "hit" provides an order to be used in the Command Phase.  The player with the least hits has the initiative.

Interesting points:
Units activated in the "command phase" can make an action of sequence, free from enemy response. This is pretty much identical to the "Heroic Move" from GW's LOTR game - they even have to the same range (12") away from a heroic named "leader" figure.    A unit activated by the heroic move  "Command Phase order" may act regardless of enemy suppression. However units who make a heroic move gets a "reaction marker" and may not react to enemy in the unit phase.

In the Unit Phase players take turns activating and moving all their units IGOUGO style. If an enemy fires on a unit (or moves within 12") a non-active unit can react by moving, returning fire, or "hitting the dirt" - a special move to gain extra cover. A unit that reacts gains a "reaction counter" and may make only one, not two actions when it is activated.  Reactions are simple; similar to Starship Troopers - but add a lot to a game and negates concerns about IGOUGO.

Units who are activated may take two actions; move or attack; in any combination including double attacks or double moves.


Gameplay
Infantry can move freely in any direction; vehicles can make a 90d turn before or after movement (or forfeit moving and pivot on the spot); vehicles can tank shock overrun infantry, suppressing and scattering them, 40k-style.

Attacks are simple and fast; dice are thrown appropriate to the weapon type; and hits are tallied up.
Units make "armour saves" by rolling cd6 equal to their rating (i.e. a type-2 soldier would roll 2 dice) each "hit" rolled cancels out an attacker's hit. Extra armor save rolls are added by soft (+1) and heavy (+2) cover. Infantry units that are hit are suppressed even if no damage is taken.
Vehicles cannot be suppressed but since they usually take multiple hits they can take damage such as fires, weapon and engine damage and hull breaches.  Close combat rules are similar to normal attacks but with a 3" range that ignores cover (and close-assaulters can only be reacted to by close combat weapons).

In the Command Phase a hero leader can use a heroic action an order to "regroup" and remove all suppression and reaction markers.  The core rules cover 45 pages and are pretty simple.

$15 for a 6-man box is a far cry from $55 for a GW infantry box, so +1 to FFG
However I feel they compare unfavourably with metal minis available elsewhere


Other Stuff
There are 33 traits such as "fast"  "heroic stand"  "medic"  "jump" that endow special abilities on a unit that possess them. There are special rules for lasers, phasers, burst and spray weapons. They are all simple, straightforward and manageable.

Scenario generation for battles is interesting. Players have a point each and take turns putting their points into Objectives, Deployment or Conditions in order to determine the type of battle to be fought.

Objectives can be "break the lines" - get troops into enemy deployment; "eliminate the enemy" - score points for units destroyed; "key positions" - control up to 4 terrain pieces; and "assassination" of a nominated enemy unit.  Deployment can be normal; from the corners (force collision); close engagement (can deploy close to enemy), and unprepared.  Conditions can include limited visibility, off-target shelling and defensive minefields and fortifications.

In addition there are 5 example scenarios which are less balanced and not for "competitive play".

Army building  info and unit stats take up the remaining pages 63 pages. "Platoons" are have 40k-like building rules (albeit more flexible) and must include 1 command section and 1-4 sections. In addition it may have 1-2 support units (or 1 support unit per 2 sections) and platoon upgrades such as airstrikes, an extra hero; or airdropped units.


TL:DR
More opportunity for tactics than 40k, but then again, what game doesn't? (Yahtzee excluded).  The two-part activation is interesting but on closer examination is simply an expansion of GW's LOTR "Heroic Move" - I'm unsurprised considering how Andy Chambers totally ripped off imitated certain aspects of LOTR with his Empire of the Dead ruleset.  Nonetheless it adds more tactical flavour than IGOUGO.  Reactions are a really worthwhile addition, making cover important, and the rules are simple and straightforward.  The suppression rules are neat, though I think firing ranges are ridiculously low - 16" range rifles and 36" tank guns seem silly in scale with 28mm.  All in all a reasonable ruleset which does not set the tabletop universe alight with innovation but it is more streamlined than 40k or Secrets of the Third Reich and would handle more minis.  That said, I am sticking with SOTR as I prefer its alternate move, metal minis and ability to use your own models (and stat up your own mechs).

It's probably worth mentioning that DUST Warfare is a tabletop expansion of the DUST Tactics boardgame so if you already have "Tactics" then "Warfare" would be a logical progression. My 10c - this is a game that will be seized on eagerly like AT-43 then burn out after a few years, leaving as a legacy cheap boxes of awesome walkers on ebay. Which isn't a bad thing...

Recommended?:  Maybe. The bendy plastic infantry put me off.  Definitely an improvement on DUST Tactics.  If you already have Secrets of the Third Reich I'd skip this rulebook and instead buy the awesome DUST mecha with the money you saved.