I have always been fascinated by the concept of "supercavitation" - the creation of  a vapor bubble around a underwater object, massively reducing drag and allowing an object to essentially "fly" underwater.  The Russian Shkval 200 knot (370kph+) rocket torpedo is a current example; the US navy has successfully tested supercavitaitng "underwater bullets" in .50cal, 20mm and 30mm for heliborne mineclearing and is working on a 100+ knot undersea delivery mini-sub for special forces teams.

I thought this would make an awesome sci fi wargame. Imagine small super-cavitating fighter-subs blasting through the water at 300+ kph, engaging each other with cannons in undersea dogfights!

It would allow a range of tactics: subs could move stealthily in games of hide-and seek at normal speeds (under 30-40 knots) or "go loud" engaging slid fuel rockets and blasting through the deeps so fast they are unable to be engaged by conventional weapons. 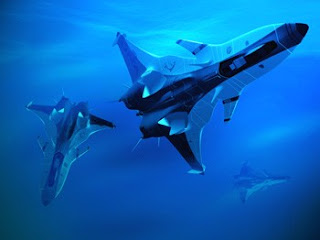 The Ships
Sub-fighters
These are deployed from stealthy "mothership" subs. They are small (20-80 tons) and usually have 2-4 crew.  Propelled by a lithium solidfuel rocket, they can travel at 30-40 knots (normal/stealth mode) or 200-300 knots (supercav).  They have a "crush depth" of 500-700m.  They carry supercav cannons and rockets as well as a few conventional torpedoes. They have no living facilities and are intended for maximum mission times of 12-18 hours.

Conventional Submarines
These range from tiny one-man mining subs to enormous underwater supercarriers.  A "normal" sub might displace anywhere between 500-10,000 tons and have one or two docking stations for smaller subs. Super sub-carriers of 50,000 tons can carry up to 20 sub-fighters.  They cannot exceed 40 knots but can dive much deeper than sub-fighters - most have a crush depth of up to 1000m.


Weapons
Conventional torpedoes are still used due to their precision, stealth and powerful warhead. Supercav gun turrets provide point-defence and they can be decoyed; but a single hit is likely to be fatal for even the largest subs.They are totally ineffective against supercavitating targets.

Supercavitation torpedoes are unguided but carry a micro-nuke warhead; the shockwaves can crush nearby targets and disrupt sensors; a good way to break an engagement and escape when caught at a disadvantage.

Supercav cannon (12.7mm to 30mm) are used to attack fast targets such as sub-fighters and incoming torpedoes.  They are also used for mine-clearing purposes.

Supercav unguided rockets (53mm to 125mm) are used to engage larger or armoured targets whose hull might resist cannon shells.

Mines are very effective and come in many varieties; some are armed with passive sensors and torpedoes and can engage targets at long ranges.

An interesting thought:
Supercavitating subs that "lose" their bubble would go from flying in vapor to hitting "solid water" in a heartbeat - basically like hitting a brick wall at 200 knots. They'd crumple like a coke can. 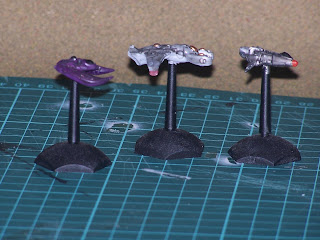 I ordered some more EM4 Minis to serve as "undersea subfighters". At $6 for 12, you can't go wrong.

Tactics
Military submarines would tend to use a "CAP" of a few sub-fighters running on silent mode; thus extending its engagement range.  If detected, the sub-fighters can "go loud" - accelerating to supercavitation speeds and activating active sonar; thus making themselves detectable but rendering them immune to conventional weapons.

Conventional subs tend to rely on stealth attacks; but can in emergencies, they can defend incoming attacks with decoys and point-defence cannon, and attempt to break engagements by dumb-firing supercav torpedoes with nuclear torpedoes.