V.S.F. seems a direct competitor for the other acronym-named game of Martians and weird Victorian tech - G.A.S.L.I.G.H.T. (reviewed here) In fact, as I flick through the pages, a similar naming convention is not the only similarity.  In fact I will compare then directly at the end of each paragraph, as GASLIGHT is probably the "benchmark" in Victorian science fiction gaming. 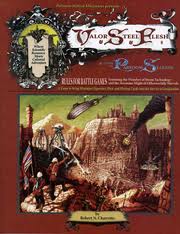 Valor & Steel & Flesh. Har har -  I see what you did there.
The Shiny
A 91 page softcover, with B&W apart from the cover.  It includes some photocopyable tokens and a quick reference section; the book is easy to read but the table of contents was not terribly informative.  The book has lots of nice B&W photos of minis included - usually a few per page - and $25 is typical for a rulebook - but after adding the P&P; in hindsight I'd have gone for a cheaper pdf download.  The rulebook was far from easy to use - I  had to refer to the quick reference/charts in the back too often as the information embedded in the chapters was not always clear.  (I.e. the firing modifiers were not in the firing weapons chapter where they logically should have been). For example, I spent 10 minutes looking for damage info - i.e. the effects of gunfire or melee on troops; I gave up and I simply presume a "hit" kills a single figure.  Examples of gameplay would have been nice.

Overall - plenty of content but more difficult to use than it should be. Parroom Station Minis off their gallery
Stats
There is a small fluff section of different Martian and human factions; they seem, unsurprisingly, linked to the Parroom Station minis.

Like GASLIGHT, minis have 2 important stats - in this case they are "Mettle" - a measure of combat ability - and "Pluck" - morale.  Vehicles have a "Reliability" - similar to the GASLIGHT "sustain" roll  - and "Protection" or armour.  Both are based off a d10, instead of the d20 used in GASLIGHT.

Characters and leaders usually have a few special abilities or flaws.  These can be randomly generated from a list of 24; similar to the managable list from GASLIGHT.  Heroes nearly always survive battles - even if they die, a roll of 0-8 on a d10 means they miraculously survive to fight again.

Gameplay
Also like GASLIGHT, each hero or unit earns you a card to be shuffled into a deck. Unlike GASLIGHT, units do not have specific cards - you can activate any unit as long as your side's card is drawn. Two cards are drawn at a time.  Actions include moving, firing, charging, reloading, and misc tasks.

Also like GASLIGHT, formations consist of 10 models; though they must stay within 6" (not 12" like GASLIGHT) of the leader.  If their bases touch they may form a "square" or fire by "ranks" and may be combined into larger formations.

A mini must roll under its target number (stat) on a d10 to succeed. A "0" always succeeds and a "9" always fails. In addition, a normal deck of cards is used to be a "Fate Deck" which is sometimes used when a roll is failed.  Heroes and characters may use a "Peril Check" by cutting the Fate Deck and trying to beat an opponents' card as a sort of "save".  In addition soldiers may need to perform random tasks by rolling under a TN - from "2" difficult to "8" easy.

Movement IS somewhat different than GASLIGHT; troops get 2d10 movement. The total score is the movement in inches.  Movement is measured by moving the leader or "focal figure"; troops are rearranged anywhere within 6" of him.  Units that move may not fire or reload.  Changing facing more than 45d counts as "movement".

Infantry can "go to ground" by halving movement; cavalry can mount or dismount; guns can be limbered or unlimbered. Terrain impacts movement as you would expect (there is a fairly detailed chart showing the effects; including Martian-specific terrain like "spine brush" and "sink sand"). If vehicles roll a '0' on their movement dice they must make a "breakdown check."

Combat
Like GASLIGHT, figures only fire into their front arc, to hit each shot must score a 3 or less on d10; after considering target cover and a few simple modifiers.

A normal rifle has an effective range of 24" and an extreme range of 48"; compared to the average infantry move of around (2d10) 11" you get an idea of the fire range vs movement ratio.
There are rules for area effect weapon such as grenades and artillery; also there are rules for heat rays and electric guns and similar sci fi weaponry. Weapons like gatling guns are prone to jamming. Vehicles can be affected by morale even if they can easily resist enemy weapon power.

Units in melee roll d10 each and add any modifiers - the highest wins.  Units must choose to "charge" into melee and pass a morale test or remain 2" from any foe.  Vehicles can charge or be charged by troops or ram other vehicles. 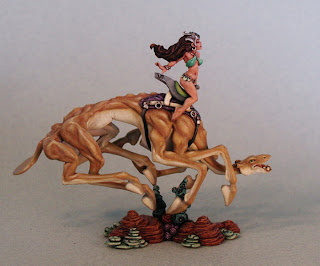 Probably the best Martian figures are by TinMan - great sculpts but a little pricey; best for sourcing hero characters for your forces

Morale
Morale is more detailed than GASLIGHT; tests are made when ambushed, charged (or chooses to charge) or casualties are taken.  Like GASLIGHT, the live figures in a unit are the target number (+ "Pluck" rating); if they fail the test, check the Fate Deck.

At around 30ish pages the base rules are similar in length to the core GASLIGHT rules. 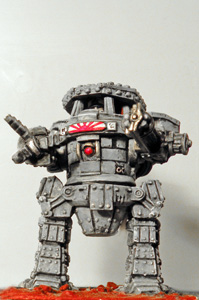 Another from the Parroom Station gallery - a Nipponese steam mech

Other Stuff
The rest of the rules are devoted to sections on vehicles (landships, aerial vessels, boats) and specific rules pertaining to them.  I.e. submarines and boats have rules for submerging and changing depth and current effects.  Airships have wind and crashing rules; also the effects of heat weapons on a dirgible, for example.  Mechanical (robot/walker) troops are included, as well as rocket packs, ray guns and armed velocipedes (motorcycles).  The sample vehicles included are handy and give a good guide for designing your own, but unlike GASLIGHT there is no "build point" system included.

There is a handy range of critters - they have a "aggression" stat that determine if they will attack a target in range; if it passes he roll it is controlled by the opponent of the player whose forces are nearest it.  There are rules for very big critters who can easily trample troops and are difficult to put down. There are plenty of examples of "Lost World" and "Martian" critters to aid you in designing your own.

There are ideas for designing scenarios and event cards; and the concept of "plot points" to modify the effects of a bad game and assist in storytelling.  Since "competitive VSF" is a bit of an oxymoron, the story-telling approach will be welcomed by most gamers. In addition six detailed scenarios are supplied to "get you going."

Finally there are "army guides" giving you an idea of troops stats, and typical units for Earth armies (such as Prussia, Britain, Russia, USA etc) as well as generic landships and steam striders and aeronefs equipped with weapons like clockwork torpedoes and spike droppers.There is the League of Technology, city-dwelling martians (aka Dejah Thoris); and wastelanders (Tars Tarkus), as well as cephalids (HG Wells tripod aliens).  Naturally, there are rules for Martian airships and alien tripods.

Overall - far more fluff and detail than GASLIGHT; however this judgement ignores the GASLIGHT supplements. Lacks a simple "build point" system like its counterpart, but given all the Martian-specific examples you are less likely to need one. 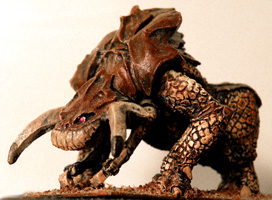 Parroom Station have some great Martian critters
TL:DR
Pretty similar to GASLIGHT's more generic offering; albeit a little bit more focussed. In fact, if you have one, there is little point in getting the other.  Both have similar card activation; pretty standard dice resolution, and a similarly simple stat line. VSF has more random movement (dice to determine max move range) and an added card mechanic ("fate" and "peril" checks); as well as more content, complexity and "crunch" - added modifiers and more specific rules. Both allow a wide variety of Victorian sci fi battles to be played although the base GASLIGHT is broader ranging and VSF is more detailed to a Martian setting with more background info, and fluff.

For a first time player, I would recommend GASLIGHT. VSF is slightly more complex; but that is not the problem: it is that the rules are very disjointed in that charts and tables at the back of the book should also have been embeddded within the chapters that refer to them; and some areas were not properly explained. It sometimes reads like a set of house rules where the writer assumes you already know the rules too.

Recommended? Simple, flexible, fun - but although sharing many many similarities with GASLIGHT; the rules at times left me somewhat confused due to the poor rules layout. If, like me, you like supporting small game companies, try the pdf. The Parroom Station minis are also well worth a look.
Posted by evilleMonkeigh at 23:58