Due to work, gaming has been on the backburner but I have a busy fortnight ahead:

Dust Tactics - review
Do we see the innovative Andy Chambers (Starship Troopers) or is he copy-pasting old rules (Empire of the Dead).


Infinity Spaceship Interior (table-in-a-weekend project)
This is on hold while I await ordering some spaceship door panels, consoles and furniture from Antenociti's Workshop. While I wait, I am contemplating starting another project so not to stall my terrain-making momentum. 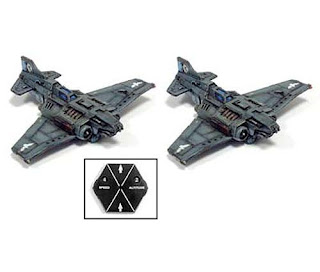 Spacefighter Games
I am updating these house-rules as I just got a few more packs of EM4 Silent Death plastics.  At $4 for 12 the price is right - about 30-40c each is quite reasonable. I want to make a fast-playing game with Infinty-style reactions, but minus the record keeping that turns me off the long-in-the-tooth Silent Death.

In addition, at my wife's prompting (man I struck it lucky when I married her) I ordered some not-BSG fighters from Studio Bergstrom (their website has execrably painted examples which must halve their sales; look anywhere else on the net for much nicer paintjobs) - I plan to use a modified version of underrated-but-brilliant rules Lightning Strike.


Biting the (Golden) Bullet
Both these games are absolute rip-offs but I can't resist dipping my toe in.  Hovering on the horizon are:

Imperialis Aeronautica
Well we know anything from Forge World is worth its weight in uncut cocaine but years ago I fell in love with a Thunderbolt mini I got in a random eBay lot but have since lost.  It still haunts me. It was the most brilliantly detailed model of the size I have ever seen. Worth $10 for a single fighter? Yeah no. On the other hand you only need about 6-8 of them, making an air wing the same price as a Infinity faction. I really, really covet the minis. 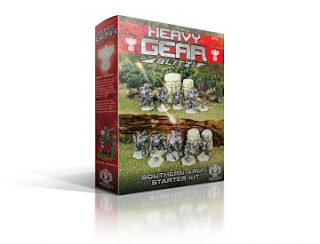 Heavy Gear Arena/Blitz
I have always been puzzled by Dream Pod 9s pricing. $50+ for five 28mm models? What other company does that remind you of?  An army of 2-3 squads and support would set you back $250+
Heavy Gear: Arena (a robot gladiator game) uses far less minis so I'm looking at that as a way to ease my way in (or acclimatize myself to the wallet pain, like boiling a frog). I also reckon I could have fun making an arena for robot battles. 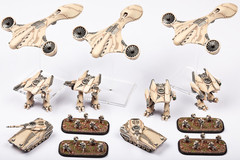 I have this uncanny feeling the hitherto peaceful, rather elitist world of 15mm sci fi is about to be invaded by the "great unwashed" 40K masses. Hawk Miniatures is going to be the next Flames of War. Buy your shares now.


Dropship Commander
I love 15mm and some of the models look awesome (don't know what the sculptor was smoking when he made the imaginatively-titled Scourge); I'm mystified by the secrecy - no ideas of how the rules play etc besides the fact dropships are used to rapidly re-deploy troops in-game adding a different aspect to gameplay.  Regardless there is a big buzz about this and I predict Dropship Commander may be a major winner, as like Flames of War; it could tap into the disenchanted 40K fanbase in a big way.  I refused to pre-order as I am tired of giving companies a interest-free loan but reviews should make their way onto this blog in the next few weeks.


Age of Sail
I flirted with this briefly in 1:4800 but gave up due to the fact all the rules seem to be hopelessly over-complicated affairs where damage systems account for every plank with complex charts, critical hits and many many hitboxes.  The wife expressed an interest the other day, so not to look a gift horse in the mouth I quickly ordered some 1:2400 Napoleanics from Tumbling Dice. $20 for 8 ships is quite affordable. She actually wants to rig them! Sucker  I mean how awesome!  I do like the idea of making island/port terrain - a nice change in scale from 28mm. So it's back to looking for a good, fast-playing set of rules....

Delta Vector the Game
I will try to con the wife try to tidy up the Delta Vector rules and condense them into a single document. Still playing with the damage rules - I'm not a fan of the "throw a heap of dice against a threshold" Firestorm Armada style and I may separate the rolls into two - one to hit, then one to damage. Sci Fi Sub War will likewise get a polish as soon as I paint my starfighter-come-submarines EM4 minis.

The Painting Backlog
Heresy Ghouls, Infinity (finish Haqquislam to go with my desert-theme board); EM4 spacefighters, and as many random pulp figures as I can motivate myself to do.

So that's the next few weeks. Remember - never start something you can't fini
Posted by evilleMonkeigh at 08:33