While I was out shopping with the wife I used up most of my remaining budget (PVC pipe for fuel pipeline/craft containers for tanks and drums) but I know have invaluable scatter terrain; fuel drums, storage tanks and piping.  The sort of stuff that is vital to survival in Infinity. 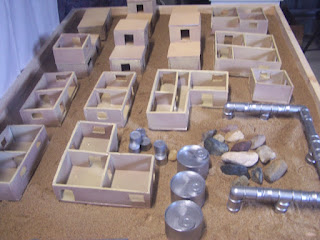 The L-shaped buildings were more elaborate as I gained confidence working with foamboard.
The fuel pipeline and tanks are VERY shiny but will receive a black wash and some rust streaks.


Buildings - Stage II
I hosed down my new "drums" and "pipes" with aluminium spray paint. With a good dark wash and then maybe some "rust" streaks they should look pretty reasonable.

I then created two more 10x20cm buildings with roller doors (bringing my base total to 8); and two L-shaped buildings (20x20cm). I am making the interiors more elaborate as I get faster and more confident at cutting.

I am only pinning the walls in place; they get some PVA glue in the sealing process but I don't want walls to be impossible to pull apart.  This approach was justified when I found a few pinned buildings from a previous project which I pulled apart, and reused some wall portions.

I also made some 10x10cm mini-buildings which I will use as a second-story atop my 'base' buildings to add variety.

Again I used the same PVA-glue seal + spraypaint technique to quickly coat up the buildings. 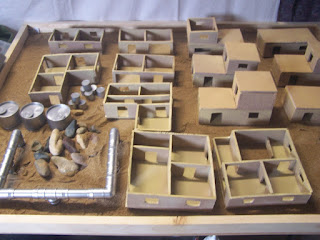 The two large buildings were adapted from an old project as they fortuitously happened to have a 20x20cm base. They can stack to make a single double-storey building.

The buildings are far from the epitome of a modeller's art, but they can be assembled and painted and are achievable in large numbers. A bit of detailing (adding in doors, windows, random electronic boxes and roofing sheeting) should tidy them up to look OK. 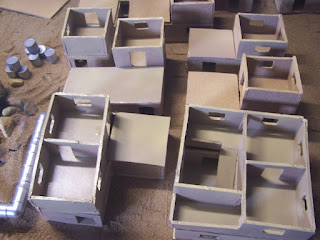 The ability to stack buildings means you can arrange the buildings in a myriad of ways.  They can be crammed together so close you can leap from rooftop to rooftop....

Link to Part 3
Posted by evilleMonkeigh at 17:27