I thought I'd paint Mark 2 to give a better comparison to Mark 1: 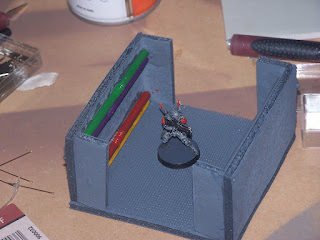 The pipes got a rough coat of paint (I've to to fill gaps and respray later).
The grating will get a metallic drybrush later.

The quick paint-up was to see how bold the pipe colours were. I'd restrict myself to a coloured "stripe" in future I think.

The ever helpful Sector9 (Lion in the Stars on TMP) gave some great ideas in a post on the Infinity forums:

"Hrm... Pipes should be against the side walls (easier to fix them), but if you're assuming a zero-gee part of the station, what's to say which part is 'wall' and which part is 'floor'? Make whatever you're going to declare as the 'floor' a different color than the walls.
You can color-code and use different sizes of pipe, too. I wish I had some pictures of the inside of the subs I worked on, but Uncle Sam frowned on that kind of thing. Guess I will have to try to describe the look in words, instead.

There will be markings on the pipes for what they carry and the direction of flow. Certain pipes *will* be color-coded. Oxygen is *always* green (and *will* always be painted green for the full length of the pipe!), refrigerant is purple, firefighting stuff is red, compressed air is usually yellow (but emergency air is RED). The pipes may or may not be insulated, hot pipes would have a cloth-like covering over the lagging, while cold pipes would basically have thick neoprene (looks like bigger-diameter pipe, but the clamps are smaller than the insulation).

Don't forget to add large boxes, either rather bright orange for damage control equipment or dull gray for electrical switchboards. Those boxes should stick far enough into the middle of the passageway that a model can use them as cover (they're usually ~2-3 feet deep in reality). If you really wanted to be OCD, you'd put the pipes and cableways in first, and then add the power and lighting switchboards.

You could also add electrical cableways, make them from bundles of embroidery thread or fishing line. Almost all electrical cabling has white insulation, except the big, fat 450v DC power cables. Those are black, and are an easy 2" in diameter in real life. call them 1mm thick on the model. We used those for dewatering pumps, and a spaceship is going to need to haul a gratuitously-obscene amount of water around.

Fittings on (water) firehoses are brass, because it doesn't spark. 3 different kinds of fire extinguishers: CO2 (with a trumpet on the end), AFFF ('A-triple-eff', to put out oil fires, has a nozzle with a small spray end and fatter part close to the handle), and PKP (dry chemical, straight pipe).

There's all sorts of 'junk' that you can put on the sides of a hallway to either provide visual interest or to provide cover." (bold font added by me as key design ideas I've taken on board)

I've reproduced his post in full as I think it would provide a brilliant guide for a spacecraft and give a real logical theme as well as great fitting ideas.  I think anyone making a spaceship interior can get something out of this - I know I am definitely going to be influenced by it as I continue my space-terrain quest. Submarines have many similar functions to spacecraft (self contained, sealed, operating in hostile environment) so we can presume many similarities.

Circular airlocks are cool, but the transition to another corridor segment cannot be too ambitious as it has to be mass produced and effectively "mate" with non-corridor room segments

Thoughts: I need some boxes (I think the craft shop sells little cardboard boxes the size of matchboxes) for wall cover. I'll do a final prototype with my foamboard scraps - I'm happy with the floor and the wall piping changes but the "transitions" or ends of the corridor sections that jut out from the walls need to be tweaked. They are a tad bland, but need to be able to join normal room sections so can't be to fancy - no iris airlock doors for each corridor section!

Time Elapsed: 45 minutes total so far for total project
Posted by evilleMonkeigh at 03:12