I quite liked Dropzone Commander rules (they do combined arms rather well) and I have often agonised over their excellent resin model range. In the end I went (to my regret) with the equally pricey Heavy Gear models, though the Hawk Wargames card terrain was a great buy and works fine for 15mm too.

Anyway, I am interested in a new space game. Firestorm Armada is a poor rip off of Battlefleet Gothic (inferior in almost every way) with stupidly oversize models and Full Thrust is old, tired and hitbox-y. 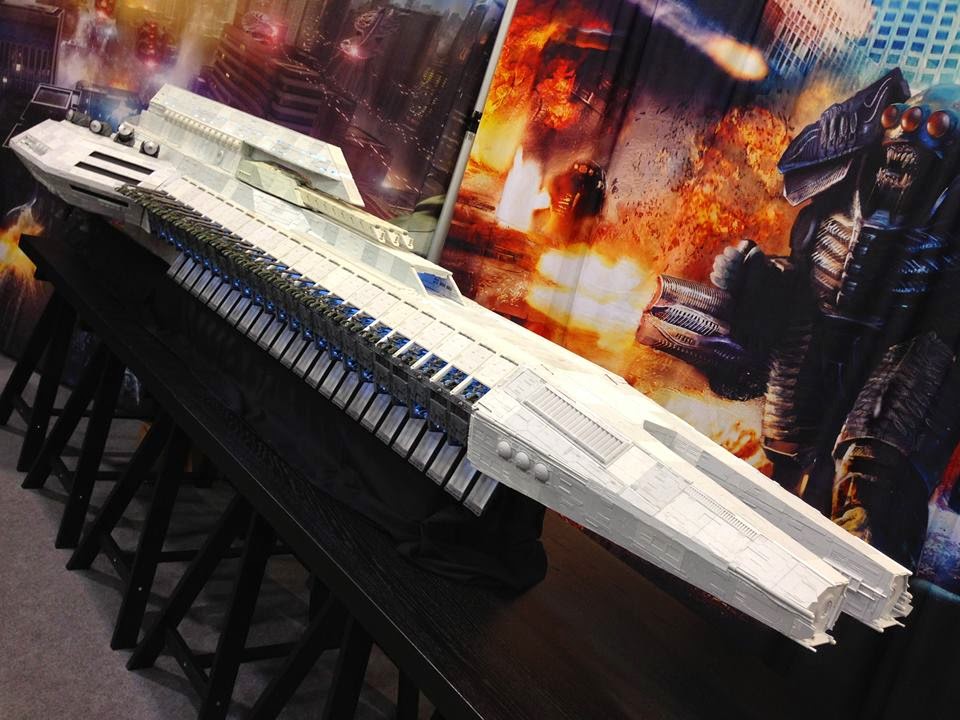 I stole this photo from Hawk Wargames' Facebook.  The epicness of a 10mm scale strike carrier announced Dropfleet Commander with a bang.  They have some great concept art and I must say I like how they communicate with players.

Andy Chambers did a great job on Battlefleet Gothic which had some interesting ideas (Orders and Blast Markers) that are still worth a look for space gaming.  Heck, I liked it so much I made silhouette ships out of ice-cream lids (even then, GW was overpriced!) and played it extensively (Chaos vs Empire, not the unbalanced stuff like Necrons).   I like the "big ideas"shown in Dropzone Commander (the mutual dependence/synergy between units, and the consideration given to terrain and scenarios).  With the solid DzC team mixed with Andy Chambers' BFG hindsight, Dropfleet Commander is surely shaping to be a major challenger to shake up the stagnant space wargaming genre.

Also, I admire Hawk Wargames - a one-man show without any Kickstarter (which even established companies seem to "need" these days) started a complete miniature line and rules from scratch. And they're solid rules and very nice (if pricey) 10mm miniatures, at that.  Would like to see them do well with this.
Posted by evilleMonkeigh at 23:50