I really liked Lords & Servants by Dadi and Piombo, so when it was swiftly followed up by Koncordia I was quick to grab it.  Koncordia aims at a hard sci fi game with the 4-5 fireteams + a few supporting mechs/vehicles; a similar level to Tomorrow's War and Gruntz. Platoon level hard sci fi is a very crowded market - does Koncordia make the cut?

The Shiny
It's a 32-page colour PDF, with pictures etc breaking up the text throughout.   I found the rules a little oddly laid out - things were not where I expected them- for example explanation of statuses like 'suppressed' appear in the stats section rather than the shooting section, and terrain being straight at the start of the book before activation, and not near movement or firing.

It says it is inspired by Impetus (a mass battle historical game), and this is obvious through the rules - for examples measurements are in a generic unit called "U" - a common thing is historical games where basing scales can vary wildly. It would have been just as easy to say inches for 28mm and cm for 15mm. Likewise the use of "TU" instead of simply saying unit or vehicle or fire team, and unnecessary abbreviations like AP and IP (active and inactive players - nothing to do with your internet address).    Unlike Lords & Servants, I found the rules quite awkward to use. 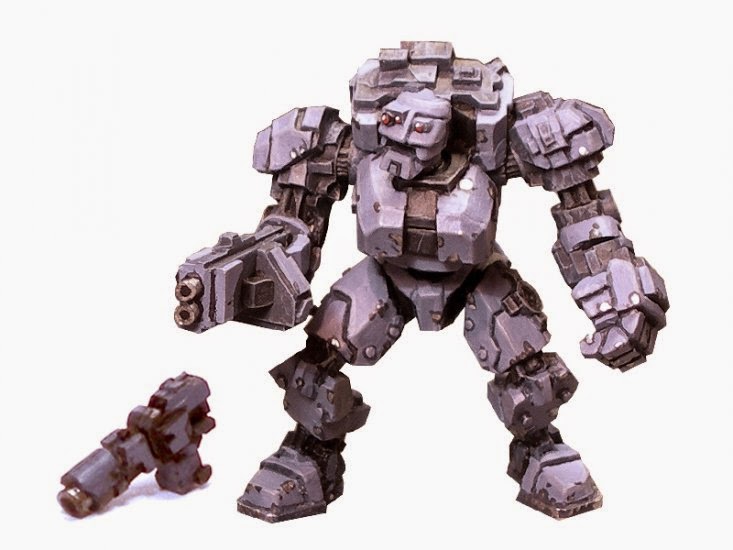 Every time I think hard-sci fi, I think of Pig Iron's awesome 28mm range. They're chunky, characterful, and paint up really well. (pic: Pig Iron Store)
Stats
There's quite a few and they don't really fall into the normal categories. The explanation of what they did was tucked away and I had to go back and look for it - which I had to do as the rules are addicted to abbreviations. So what is this M, TS, D, CC and DV?

Initiative
Units roll 2d6 and the bonus of their team leader.  The highest scorer is the Active Player (AP) and the other guy is the IP (inactive player).

First a TU can rally/reset if needed (i.e. remove suppression or immobilization). The TU must pass a Discipline test - a score like 3+ on a d6.

The AP moves his TU, choosing his speed (cautious, tactical, running).  The IP can interrupt any non-cautious movement.    Then the active TU can fire; the IP can interrupt by returning fire or taking cover.  A TU who is suppressed or already fired (you only get one reaction shot) can only take cover.

Movement
Apart from noting the different movement speeds, flying units like drones and tunneling units were the only important thing here. Terrain effects on movement should logically have been included here but were found way back at the start of the book for some reason.

Combat
Sweet buckets of dice batman!  A typical assault rifle rolls 2-3 dice so a single TU (fire team) will be typically rolling around 12 or more dice.  Movement might halve the dice depending on the speed and type of TU.

Inactive TUs can fire once in reaction to an active unit moving or firing (i.e. overwatch).   A off-board fire mission can be called in once per game.  Weapons share range bands of 10-20-30-50U (inches), rolling a different amount of dice compared to their effectiveness.

The buckets of dice hit every 6. Every two 5's also count as a hit as long as the target is not in cover.
TUs can split fire between targets if they wish.

Hacking
Any AI units like mechs can be hacked and immobilized for one turn.  You must roll equal or under the AI score of the target.  Hacking devices can themselves be hacked and permanently burned out.
I quite liked this mechanic - you have to choose between immobilizing an enemy unit or a lower chance of permanently denying the enemy their hacking abilities.

Army Lists
There are a few sample army lists which I expect will increase a lot when the game is "offically"released.

TL:DR
This is very much sci fi Impetus.  The leap between a mass battle historical ancients game and a fireteam-based sci-fi one is a bit of a stretch, one that Koncordia does not make particularly successfully.  Impetus might compare well in ancients to say Fields of Glory, but I feel this is a good example of a gaming engine used in the wrong genre/scale.

The combat is clunkier than it needs to be (I feel there is more steps than needed), and the rulebook is awkwardly laid out, with MNA (many needless abbreviations) that are annoying.

It's a solid enough game, that is unfortunate in its number and quality of competitors.  Ten years ago this would have impressed.  Now, the only thing that sets it apart from other games is the way it goes about things, but it does not really offer anything better or new in the way of gameplay. I did like its simple hacking rules, but overall,  everything Koncordia does (reaction fire/move, degrading of units/morale) has been done better or simpler in another ruleset.  Possibly this would be a good game if you have an Impetus/historical player you want to convert to sci fi, but I can't imagine that being a huge target demographic.

Yes, I am aware Koncordia is classed as "in development" aka beta.  However, it is a beta I paid $7 for, so it will be judged just like any other "complete" paid rulesets.   It's like selling someone a 'beta' tomato sandwich with unripe tomatoes. It costs the same as a normal sandwich, but calling it beta sandwich means they can't criticize the taste?  If you charge money for it, it's a "product" you judged worthy of sale, not a beta - or rather a playtest that playtesters must pay to participate in.  It's a slippery slope.

Recommended? Maybe.   It's OK, it's not a 'bad' game by any means, but it's a tad awkward and there's not really enough here to make it stand out in a very crowded field, unless you are an Impetus fan. Because that's what it is - Impetus in space.  It makes the transition about as gracefully as 40K made the transition to WW2  (aka Bolt Action.)  Beta or not, though I'll continue to follow its progress, I can't see it having the tactical depth of Tomorrow's War or the user friendly polish of Gruntz - or even rising above 4th-5th choice for my platoon-level hard sci-fi gaming.   In short - it's OK, a decent price at $7 and (naturally) streets ahead of say, Warhammer 40K, but there's other sci fi games I'd suggest you try first.
Posted by evilleMonkeigh at 04:33