I'd like to dedicate this article to a very underrated and overlooked wargaming system.  Where Song of Blades and 2HW's offerings push their "one system for all genres" many ignore Savage Worlds, a skirmish system that has been around a lot longer.

"But wait it isn't "overlooked" - isn't Savage Worlds a RPG?"
Yes, it is. A RPG that was based on a skirmish wargame, the Great Rail Wars, that was built to handle multiple squads.   That wargaming core remains - the RPGs just bolt more detail on the top.
So why would you pick Savage Worlds for wargaming? 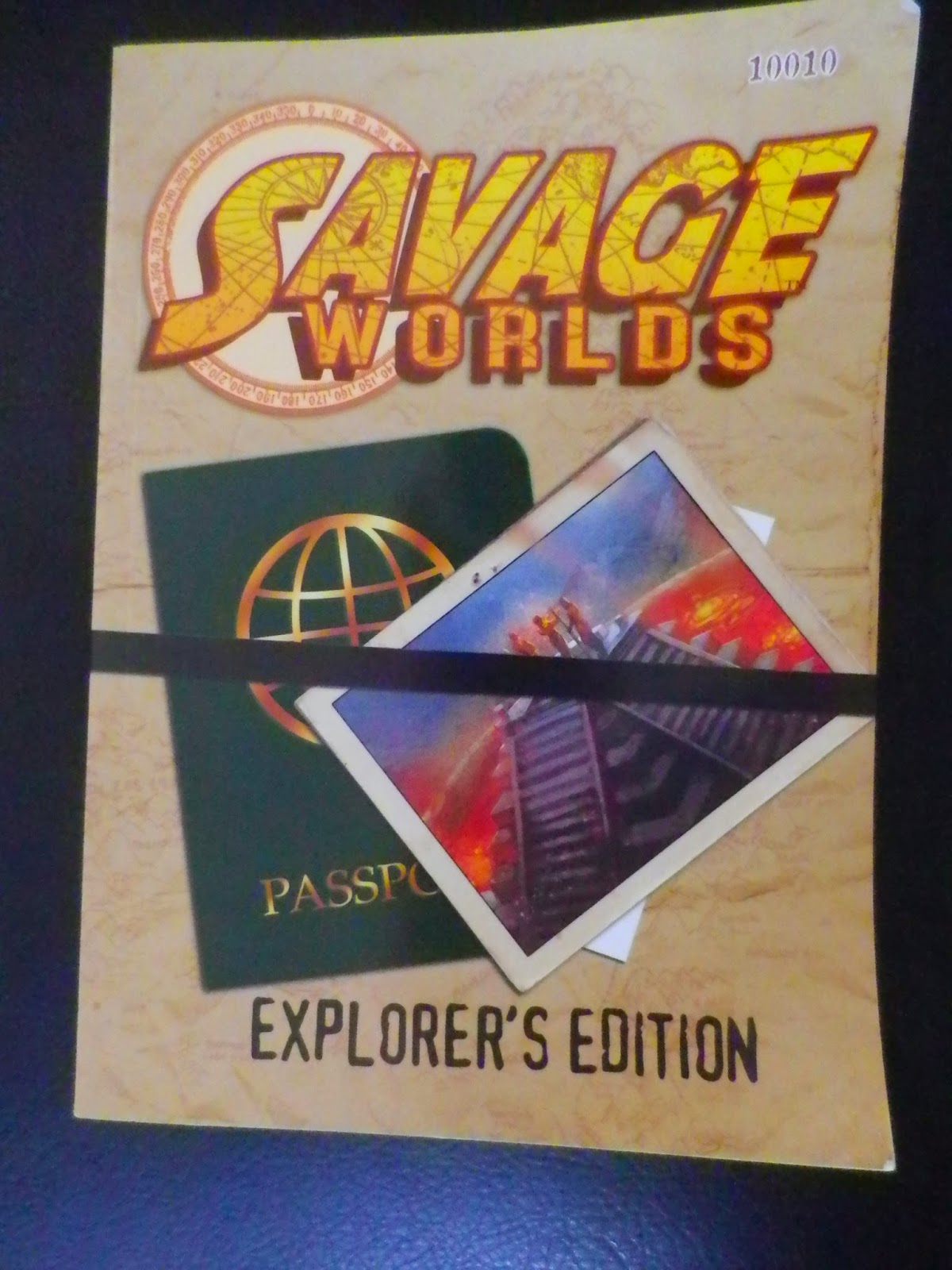 The Explorer's Edition has all the core rules, and enough generic rules for a pulp/fantasy game. Great value at $10.
It's"Shinier"

Savage Worlds system books are (usually) produced and edited to a much higher standard than the usual indie (pdf/self published/Osprey) RPG-lite. The rules are more coherent.  And the base system (a steal at $10) is both half the price AND far better quality than your average 2HW book.

It has better fluff
Most Savage World settings are backed with a mature background universe and history - the product of years (even decades) of RPG supplements.  They are usually written by experienced writers. Though not classic literature, the "fluff" is usually light years ahead of the generic, poorly written pap often found in typical wargames books.  They actually make you want to game in their universe.

If you like a narrative wargame, what better place to go than to the masters of narrative - the RPG crowd?

Savage Worlds Explorer's Edition
I'm going to focus on this one, though I have quite a few setting books, as it contains the core rules.  Savage Worlds tends to focus on weird war/pulp/fantasy settings. The Explorer's Edition is a 160-page toolkit that gives you the basics to game these settings - so you're kinda getting 2-3 rulebooks in one.   If you want more detail and the fluff for a specific setting, there will be a sourcebook available.

The sourcebooks are usually big glossy hardbacks that tend to have hefty postage that places them in the $35-$60 range for an Aussie like me.  Luckily most are available as pdfs.

The Shiny
Probably the best value-for-money rules I own.  At a mere $10, the glossy, colourful A5 softcover is cheaper than most B&W pdfs, and of a quality on a par with most $30+ rules. I particularly like the "quick reference" page at the end of each section which gives you an "at a glance" summary of the chapter. 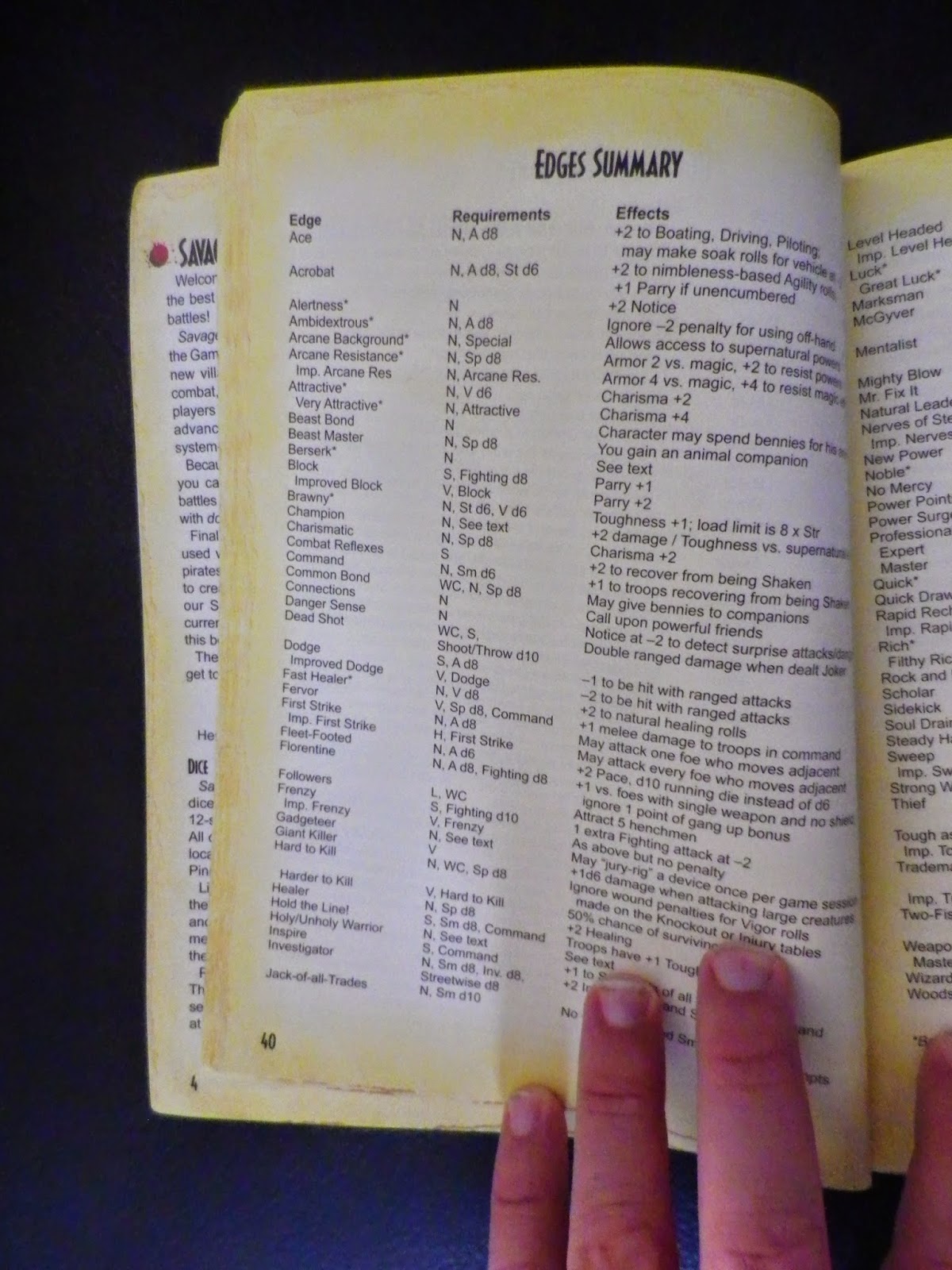 There is a "quick reference" summary at the end of each chapter; I wish more rules would use this

Stats & Unit Builder
There are 5 stats, arranged in a way that shows its RPG focus.
Agility
Smarts (quickness of thought, awareness)
Spirit (wisdom, willpower)
Strength
Vigor (stamina, damage)
The dice can also be shared amongst skills. Many -  Fighting, Shooting, Parry, Toughness - are likely to be more important for wargaming than the actual base stats. Naturally there is a "advancement" system for levelling up (it IS a RPG after all) but it's pretty basic

Savage Worlds contains a complete unit builder for giving stats to any random creature, though they are not competitively balanced i.e. a units can have almost any skill and they are valued equally, i.e. "Fighting" is usually far more useful than "Charisma" in a wargame.  There are lots of skills, abilities ("edges") etc as you'd expect from RPG, with a definite pulp flavour. What I like - on p.40-41 the special rules are all listed as a quick-reference chart with all the info you need "at a glance."

Gear includes a selection of generic modern, medieval, black powder and futuristic armour and weapons, which again come with a quick-reference chart. A solid selection from flails and slings to rocket launchers, Claymore mines and laser rifles.

Game Mechanics
A deck of normal playing cards and various dice (d4, d6, d8, d10, d12, d20) are employed.
For skills and abilities, the higher the dice, the better - as you roll the dice and need to pass 4 or more to succeed.  There is provision for opposed and co-operative rolls, and also rolling for groups.

There is an "exploding dice" mechanic where any maximum throw (say a 8 on a d8) earns a re-roll.  Every 4 points you exceed your target roll gives you a "raise" - say you needed a 4 on a d12 and rolled a 8+ - then you would succeed and get a "raise." Raises add bonuses, like an extra damage in an attack.


Your heroes ("Wild Cards") get to roll an extra dice and choose the best one when making rolls.  There is even resource management - each player gets three "Bennies" (free re-rolls, or damage mitigation) and an additional two bennies for each Wild Card (hero) which they can spend each game. 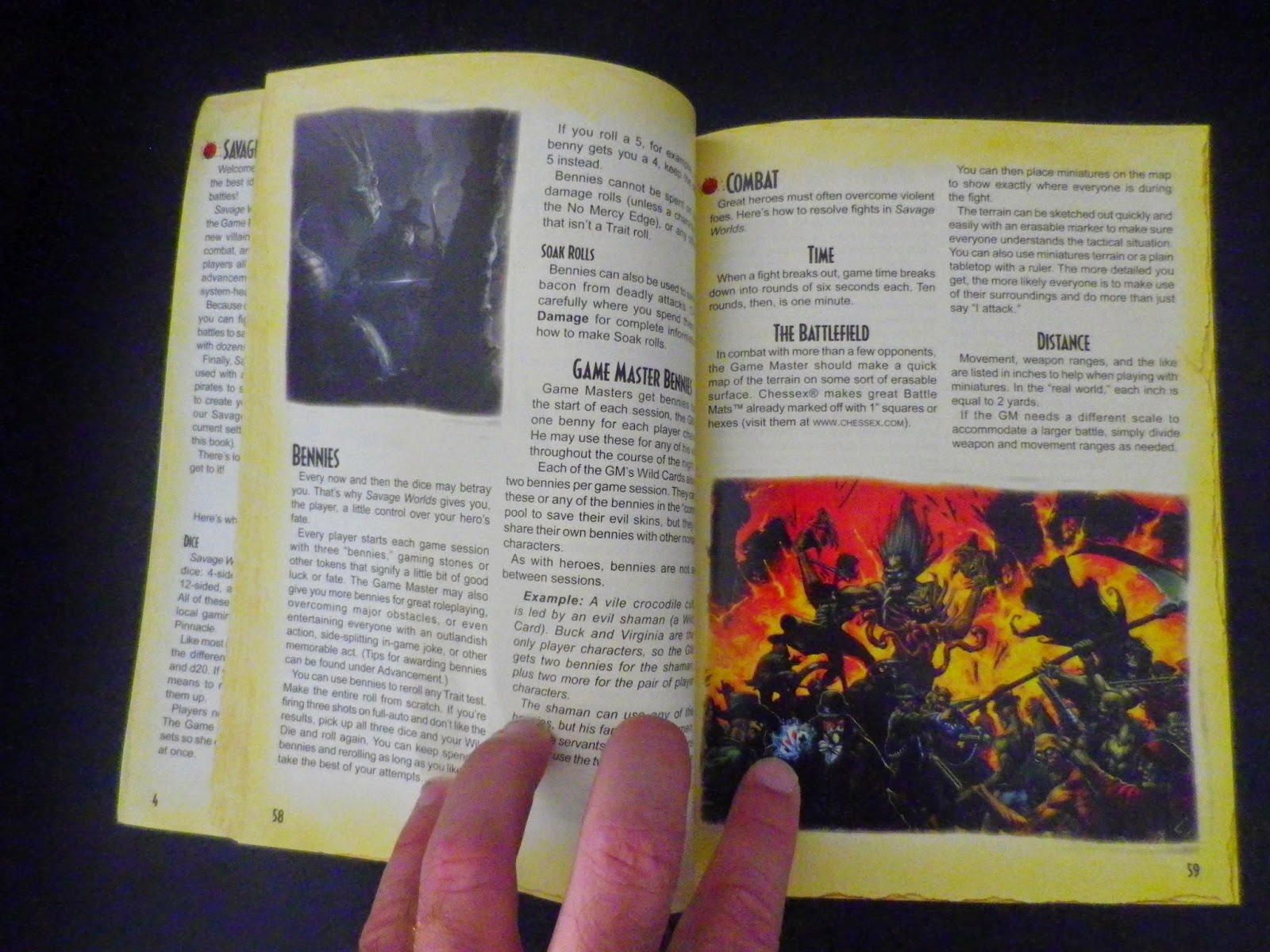 Cheaper than a pdf, Savage Worlds has the production values of a $30+ rulebook

Initiative
Each turn, each unit or hero is dealt a card, and this determines the order they activate (i.e. Joker, Ace, King, Queen, and so on down to the deuce).  A unit can go on "hold" so it can act later in the turn. It must make an opposed roll using Agility to act before an opponent it is "interrupting."  A player with a Joker can use it to interrupt any move at any time, as well as gaining a +2 boost to rolls.

Movement
This is (usually) a free 6" action - there are rules for crawling, crouching, difficult going and jumping.
Combat
Shooting and close combat is simply passing the 4+ (shooting) or the opponent's Parry skill (melee), with additional ranged penalties for long range and cover where appropriate. If you beat the requirements by +4 you get a "raise" (usually a +1d6 bonus to damage).   The attack then uses the strength of the wielder+weapon (melee) or weapon (ranged).
If it beats the opponent's toughness, the target is Shaken (can take no actions, can move only half speed - characters can attempt a recover roll next turn).
If the attack if it beats toughness with a raise (+4) - or scores a second Shaken the target is Wounded (and non-hero minions are out of action). Heroes can usually take 3 wounds - each wound is -1" to movement and dice rolls.  Incapacitated heroes with 0 wounds have extra effects like "bleeding out" or "stunned."  They may roll on an injury table after the game - possibly taking a hit to the "unmentionables" if they are really unlucky.

There are rules for area attacks (scatter) and ways to target specific areas (i.e. shoot the eyeslits of a robot, or a tentacle off a monster). Players can also "defend" which adds to their Parry score. Players can dual wield, suppress with automatic weapons, go prone and make "all out attacks" which reduces their defence in favour of attacking bonuses. Targets can be grappled or disarmed - or finished off if they are helpless.   Units can also be taunted or intimidated - success means you get a +2 modifier next action against the loser.   The "bennies" resource can be used to soak up a level of damage.  Again, the combat section ends with a useful quick-reference page. 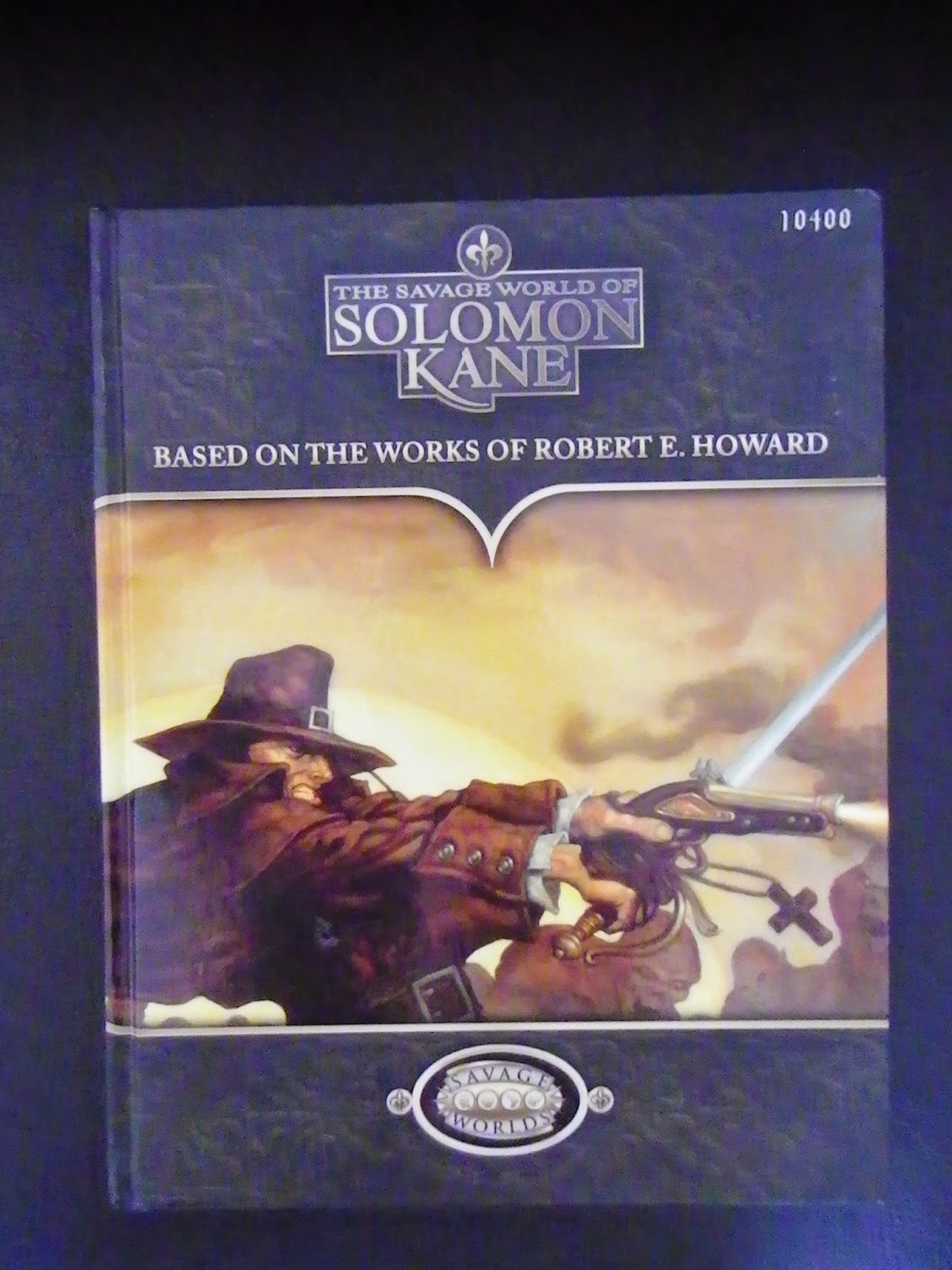 The sourcebooks add scenarios, creatures and special rules, along with inspirational fluff.

Magic/Arcane Arts
Magic is simple and follows the combat mechanics, but a magician has a finite amount (~10) of "magic points" to spend, and usually 2-3 spells.  Some spells can be "maintained" from turn to turn, but accrue -1 modifiers to any additional spells.  There are also "weird science" rules for crazed inventors.  There are about 30 spells in a decently descriptive collection covering everything from the usual fireballs and lightning bolts, to controlling animals, super speed and telekinesis.


Extra Rules
More "scenario specific" rules like mounts, fear (quite detailed - would work for a horror setting), fatigue, hazards, heat, cold, poison, drowning, fire and falling (though falling probably should be in the "movement" section.) Add in radiation, hunger, thirst and lack of sleep - though most of this is RPG-centric.  The vehicle rules include collisions, jumping from vehicles and losing control, as well as fighting from/attacking vehicles, aircraft and watercraft (including age of sail).  While not particularly streamlined, the rules are quite comprehensive enough to cover the situations where vehicles appear in the game.  There are abstract rules for mass battles if you ever need to cover huge quantities of troops.

Monsters & Villains
There are some special "monstrous abilities" for creating monsters and undead, and a range of stats for mundane beasts like crocodiles, gorillas. wolves, snakes etc as well as more dragons, ghosts, vampires, zombies, ogres, giant spiders etc.  The mech profile reminds me I have yet to try a Warmachine game using the Savage Worlds engine. This is by no means an exhaustive list - more would be found in the setting-specific sourcebook, of course. 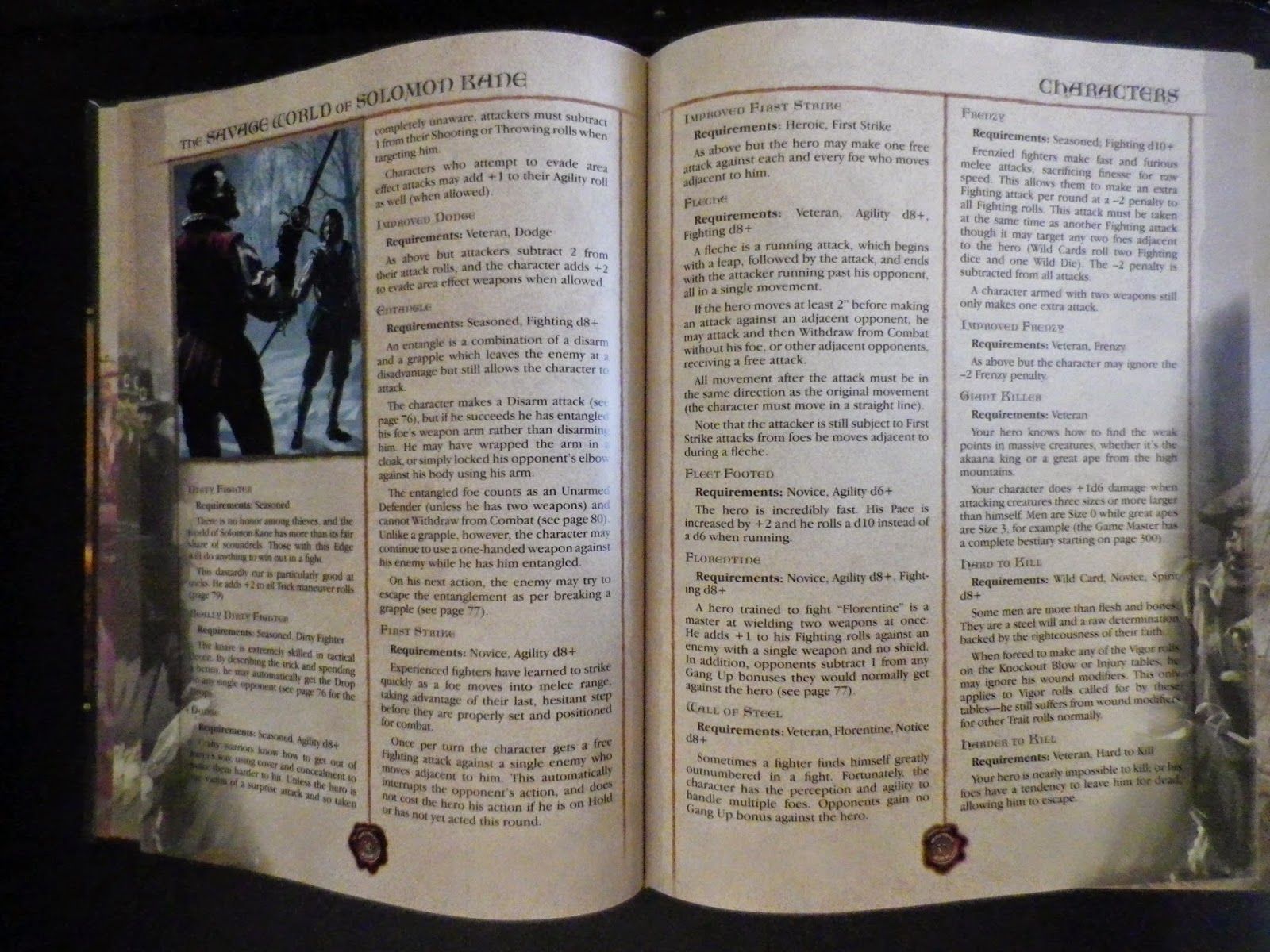 The source-books are good quality. The Solomon Kane book is my favourite.

Drawbacks:
- No scenarios in the base book; focus on RPG story > gaming
- Lacks historical accuracy
- Not competitively balanced
- Needs a source-book to get the most out of it, and for more monsters and beasts
- Lots of skills/special abilities; many not needed for a wargame
- Stats and skills of individual player (7+) is a bit excessive
- Uses lots of weird dice (d4, d8, d10, d12, d20)

Recommended: Yes.  A solid set of wargaming rules which plug into a wide and interesting range of sourcebooks.  Grab the cheap Explorer's Guide and maybe try a sourcebook or two on pdf to get started.