My starter box set arrived today in an impressively large box, and I was very excited to open it. I'll spare you a traditional "unboxing" YouTube video* (*I'd find it too tricky to narrate it in the self-important yet monotone American accent usual in such things) and instead focus on the rules. (I'll include a few photos though).

I'm a bit worried my nostalgia goggles will make me kinder than usual, but on to the rules review (bear in mind this is only playtested at a very rudimentary level.)

The Shiny
The book is a 112-page glossy softcover with art and illustrations throughout.  Whilst not in the Infinity category of "shiny" it is nonetheless a pleasant addition to the collection on a par with the better softcover productions. It actually has an index (which seems unusual these days) but lacks a quick reference page.  Only 28 pages are rules - the rest is stats, paint schemes and fluff. 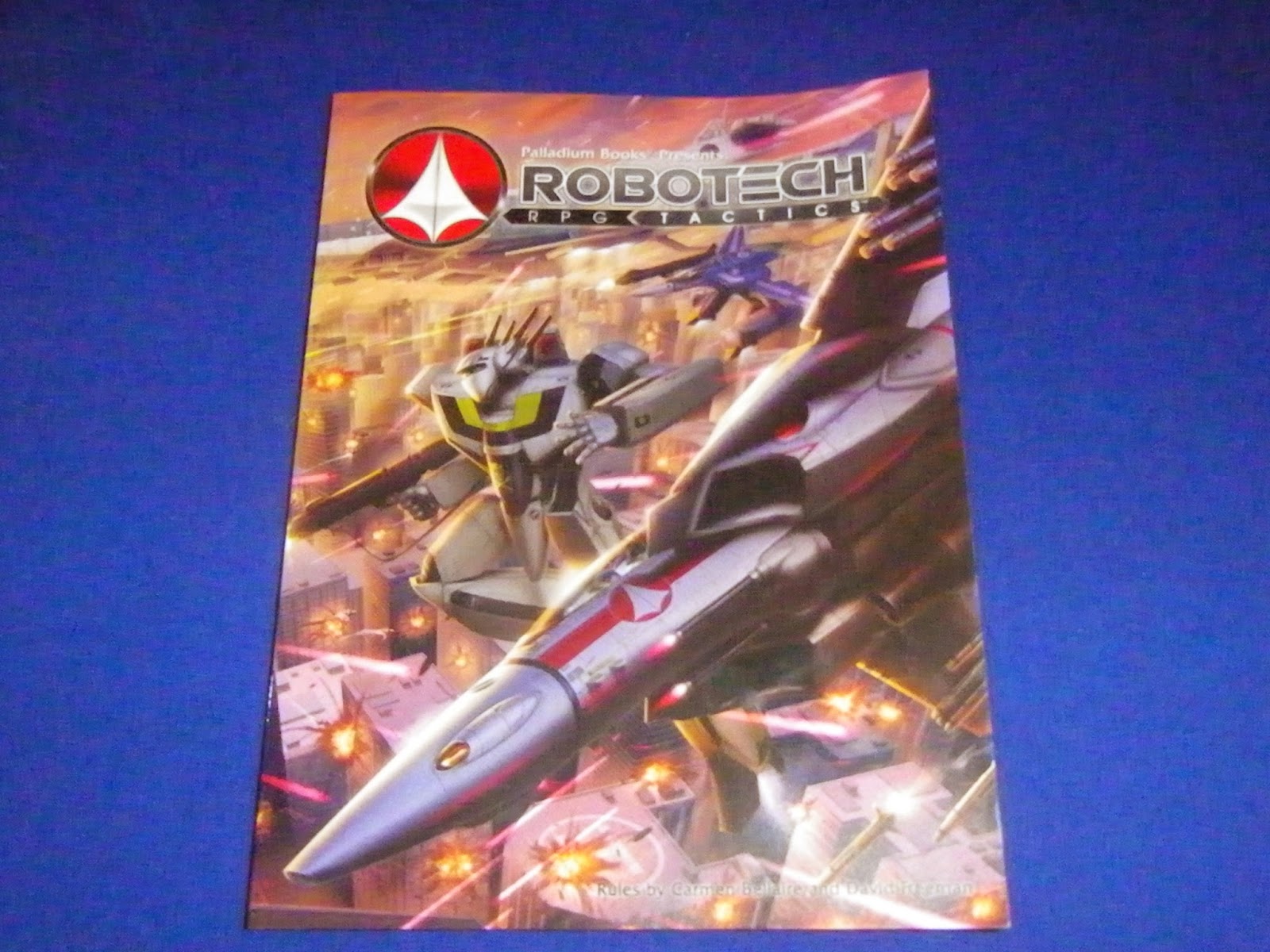 The rules are not in the "Infinity" level top tier, but are colourful, glossy and pleasant, with lots of nostalgia-inspiring Robotech/Macross pictures.
Stats
These are in the ~4 stat "sweet spot" for skirmish games:

Speed = duh
Piloting = how well it handles, dodges, and can melee
Gunnery = shooting accuracy
Defence = how tough/hard to hit

In addition, the 28 generic special rules for weapons and vehicles are straightforward enough and well within the norm, and compare favourably with the 50-100 in most indie rulesets.  However most mechs have quite a few of these special rules each (especially the Veritech fighters which have 3 "modes" as they can transform from mech to jet.) 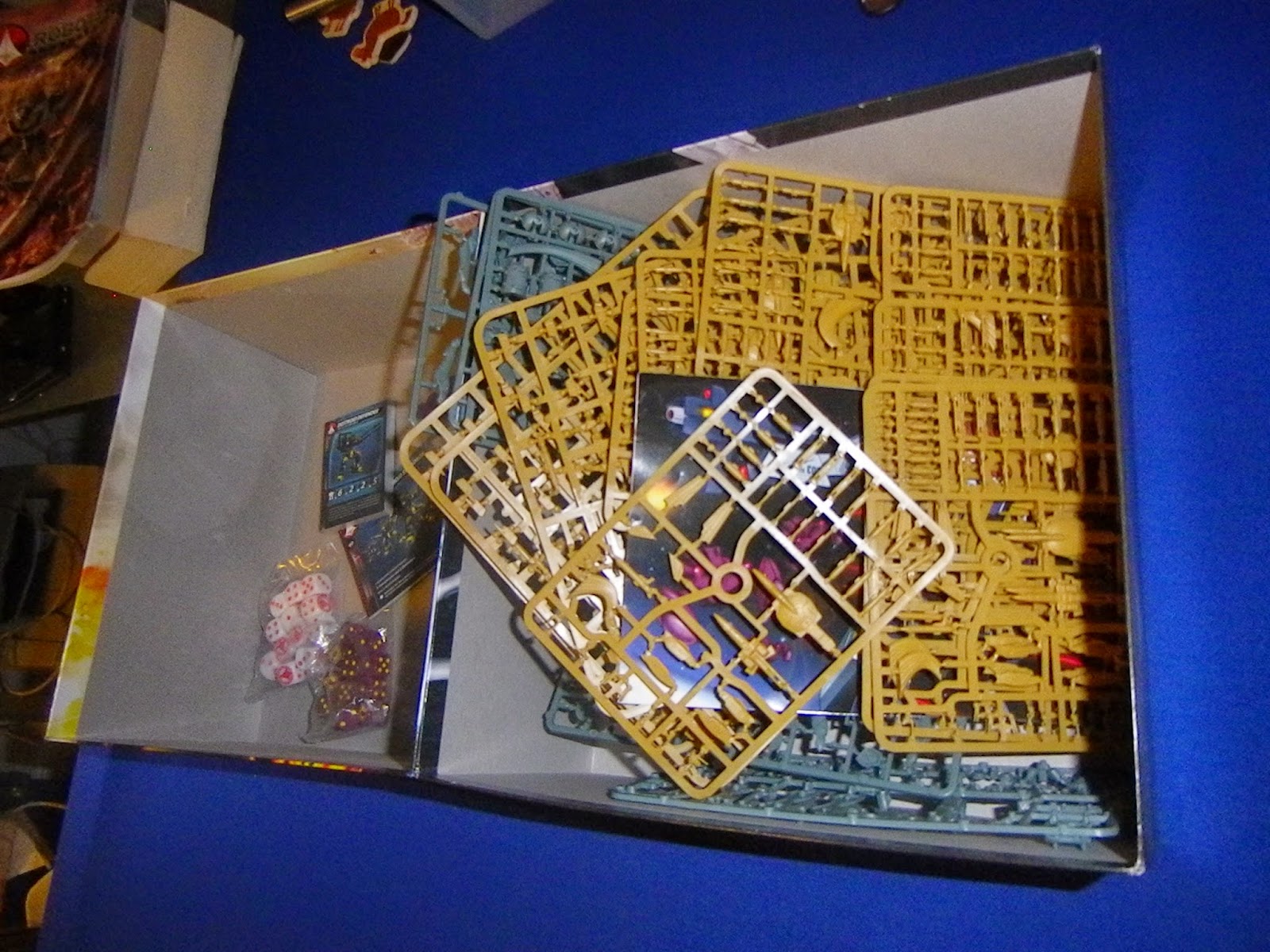 There was plenty of plastic sprues in the box....
Activation & Initiative
Players roll 2d6 to see who goes first then alternate moving "squadrons" (groups 2-4 mecha) which don't have to be close together (but weaker pilots can benefit from staying in close formation).  Pretty much a standard alternate move.

However it gets interesting with Command Points - you get one per mecha, plus extras for leadership bonuses. These are a resource which you can "spend" in a range of ways - to try to "steal"an activation (i.e. activate 2 units in a row); boost speed (double movement); make extra melee attacks or or fire extra weapons, dodge attacks, shoot down missiles or mitigate damage.

These do not automatically succeed, but better pilots are advantaged - for example to boost speed players add their Piloting skill + d6 together - they need 6+ to succeed.

I do like the Command Points system - they adds depth to an otherwise pretty generic game. 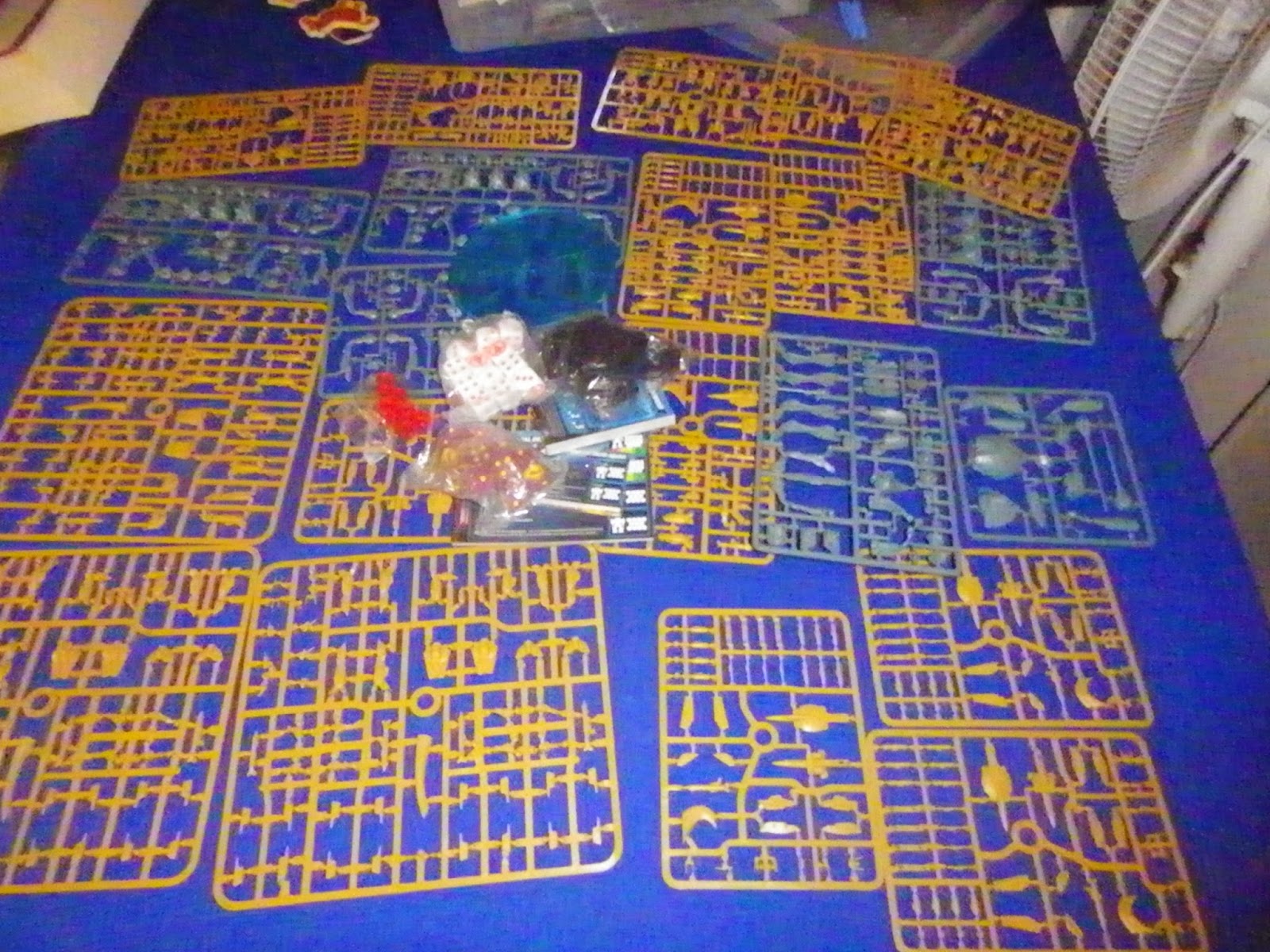 ..which looked impressive spread out...
Combat
This is pretty simple.  Players roll Gunnery + D6 vs the target's Defence.  If the score is equal or above it hits.  However targets can spend Command Points to attempt to dodge - they roll a d6 + Piloting to see if they beat the attack roll.  Damage can further be halved by spending a Command Point - which as you can see are an important "currency" to manage in the game. There are a few modifiers for cover and bonuses for flying in close formation.

Damage is inflicted as "hitpoints" - which regular blog readers will realize is not my favourite means of damage resolution (I belong to the "no record keeping, removes model with lots of lots of pew pew and explosion noises" philosophy).  However the game does come with nifty Warmachine-style cards which mitigates my annoyance a little.

Melee is done a little differently - both sides make an opposed roll - they add a d6 to their Piloting stat.  There are a few special moves (body block/shove, grab, kick, power punch, stomp) which allow for some cinematic action and reminds me pleasantly of the criminally unsupported Lightning Strike rules. (Curse you, DP9)

Movement
These are pretty usual, except you can destroy buildings (essential in a mech game!) and there are some good special rules that pertain to it:  Aircraft can turn 90d at the start of their move, and must then only move straight (for at least half speed.)  Jets with afterburners must make a second movement at the end of their activation after any gunnery/attacks.

Again, this simple but effective differentiation reminds me of Lightning Strike, and makes a clear distinction between Veritech fighters in mech, hover and full-jet mode. ...however my excitement faded when I realised how fiddly they are to assemble - and how you have to assemble and paint 3 models for each Veritech you want in your army (for battleroid, gerwalk and jet modes)
Other Stuff
Lots of stats of the different mechs, with some rather nice art that made me quite nostalgic (and also recall jealously Mitchell from my Year 2 class, who had all the mechs) along with a character section with their own special rules (i.e. Rick Hunter, Roy Fokker, and the dude with glasses who hooked up with the Zentraedi chick, among others)

There is also an very extensive paint guide with all the colour schemes from the TV show (I might add the starter box comes with lots of decals with emblems/squadron markings.) 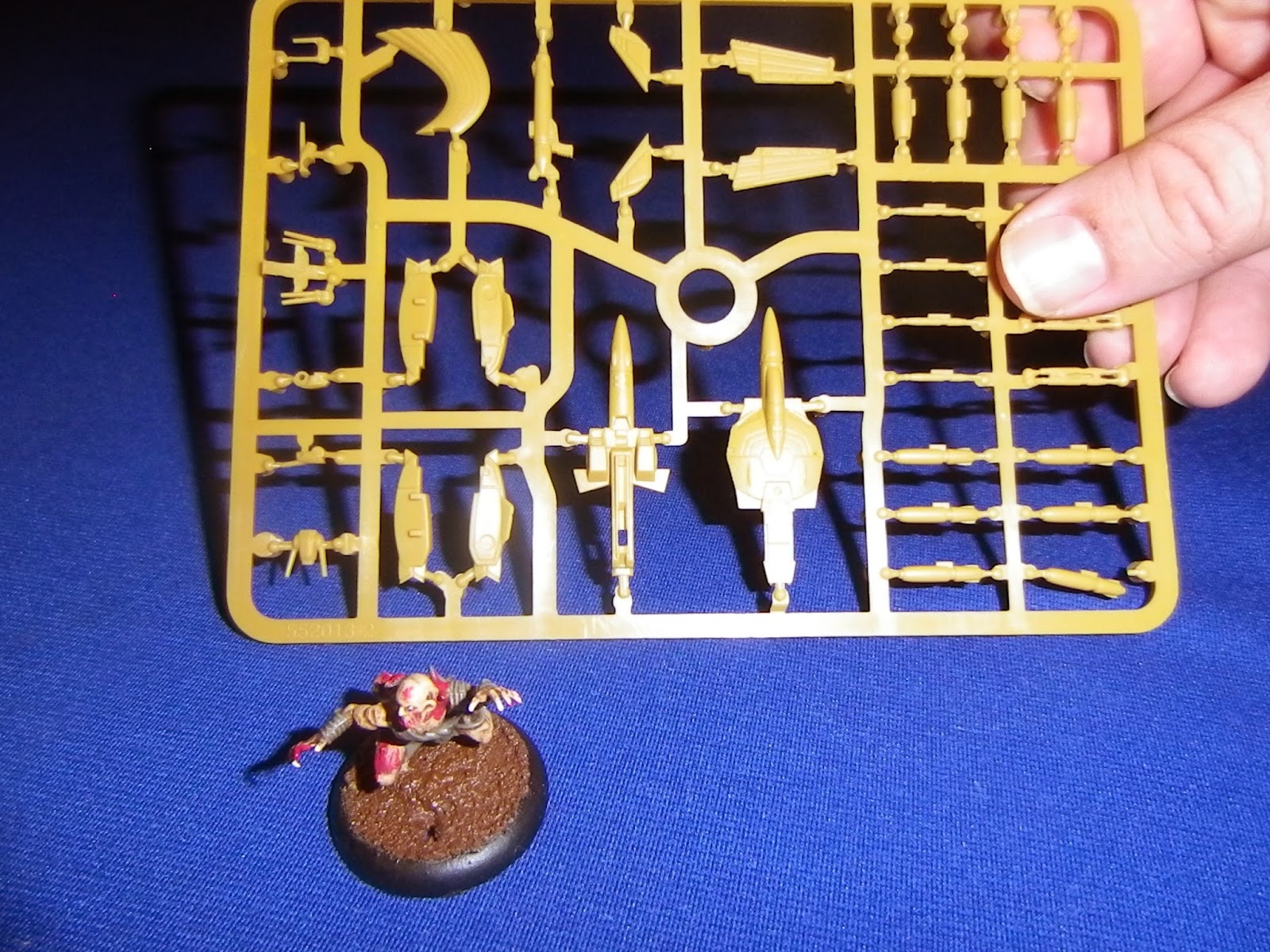 A 28mm Mantic ghoul for scale. The mechs were smaller than I expected...

Scenarios, Campaigns & Advancement
There are 4 beginner scenarios that gradually increase in size/complexity, and an army builder of sorts (pretty simple; you must have at least one 'core' unit per 150 points; with a minimum of two).

The seven standard scenarios allow you to dice for the type of deployment allowed, and there are six special rules to add spice (orbital bombardment, space battles, unusual gravity, airborne assault etc).

There are also campaign rules, but they are more examples/suggestions/guidelines on the types (map, tree, narrative) you can do, rather than thorough "Necromunda" style rules.  There are optional rules for advancement but the EXP you earn unlocks skills that last for only one game - it'd keep armies from getting unbalanced, but I reckon it's a little lame.

However there is a  detailed point-system that links to the Robotech RPG. This could be easily jerry-rigged for a more Necromunda-style experience.   The tools are there - with a few house rules you could make a reasonably detailed and interesting campaign system. 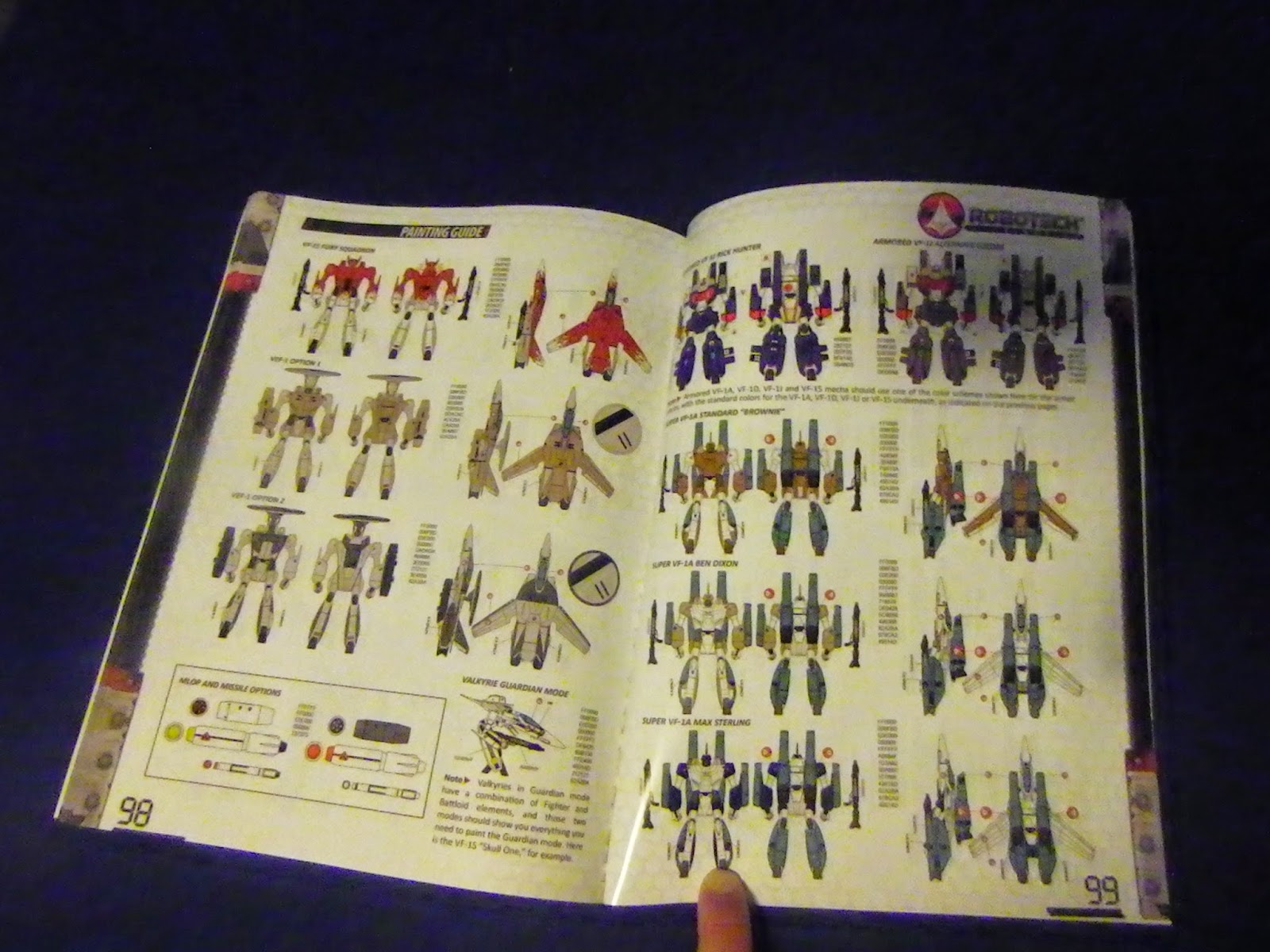 The paint scheme guide is handy for those who don't have the time to rewatch Robotech/Macross for
"research purposes."
TL:DR
+ Simple, cinematic combat rules
+ Movement differentiates simply but clearly between mechs and jets
+Activation system has resource management (command points) which adds decisions
+Just enough tools to make your own campaigns

-Most mechs have multiple special rules (though they are simple and generic)
-Hitpoints/record keeping (though offset by nice Warmachine-style cards)
-Not really a  'mass battle' ruleset - it's a skirmish game, which will handle ~12 a side
-Rules are pretty generic - nothing that exciting to be honest
-Assembling the models will be a b***h (not really rules-related, but...)

Whilst I'm not super-excited about the rules, they are a sensible mix of familiar mechanics; and I like the resource/activation system.  They're definitely good enough and I won't be trying to jerry-rig another rules set for this genre (like I do for Battletech, Aeronef, and most space games).  A little off-topic, but I'd add the value/content ratio of the $100 starter box, whilst not "great" value, seemed reasonable enough.

Recommended: Yes.  Whilst I'm not keen on hitpoints, it has solid activation and sensible combat and movement.  And bits of it reminds me pleasantly of Lightning Strike, which tops my underrated-game list.
Posted by evilleMonkeigh at 03:04