Infinity the Game: Getting Started

Infinity is a game I reference a lot, both in comparison to other games and in game design articles  It has many great qualities but also several noticeable flaws.  I find it brilliant but frustrating - like a hot girlfriend who is unreasonably demanding at times.  That said, it's probably my favourite game to play.  It's a game I recommend strongly, but with some caveats. The aim of this article is to give people a quick overview of the pros and cons of the game, then give tips as how to get started.)

Why you should play Infinity
*Very interactive. It's "always your move."
*Opponent's ability to lethally react to your moves makes every action important and nerve-wracking
*Order pool adds depth and "resource management" in a simple, easy way
*Ability to spend orders any way you want means many layers of decision-making
*Game rewards good positioning and use of cover
*Your "army list" is not as important as tactical skill; you can make forces of fun models you like
*Awesome metal models. The detail and dynamic poses are unsurpassed.
*Low model count (5-10 per side).
*Cheap to start.  $50 for a starter box.  $70 will get you a solid army.
*Uber-units are no substitute for good play; even low-stat models can easily take out "heroes"
*If you don't like the models, proxy using any other models you like.
*Works well for modern warfare and you can simplify it too
*Free rules. Also printable blast templates, counters etc.
*Corvus Belli is a company with very positive customer relations. The anti-GW.
*Official Youtube tutorials and fast-play rules to help you learn.
*Works well for modern warfare (tactics and weapons similar)
*Great, helpful, positive community. Very useful online wiki.
*You only need a 4x4' table so you can setup anywhere
*Bright, colourful, positive futuristic universe.  Not a skull, scroll or gothic ruin in sight.
*Beautiful artwork and interesting fluff
*Free official "army builder" software makes creating competition-legal forces easy. 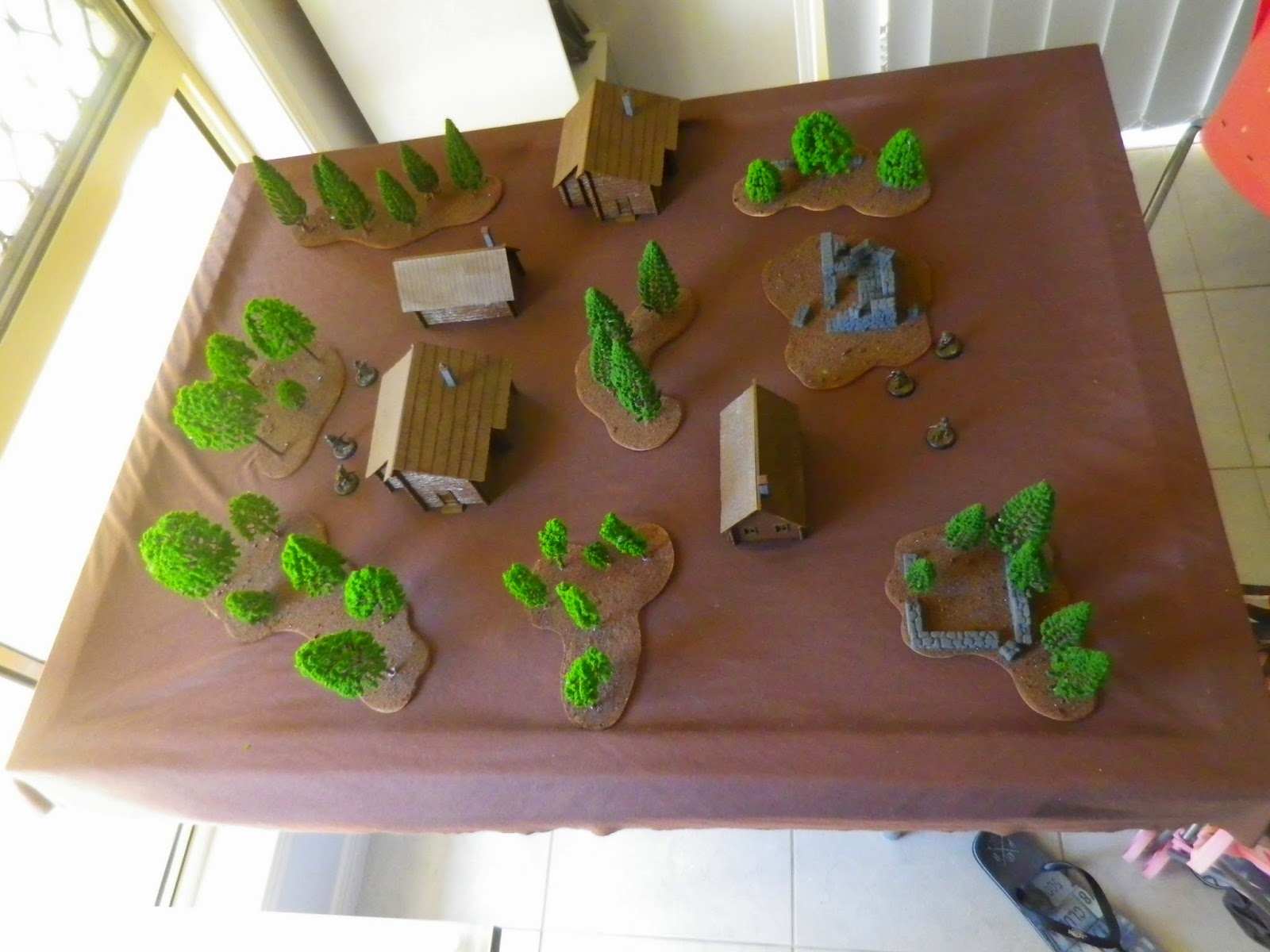 There's enough terrain on this table, right?  WRONG!  To an Infinity player, this table is full of wide-open fire lanes which are lethal to cross.

Why Infinity can be frustrating
*Lots of special rules, weapons and ammo types (~170) makes the learning curve near vertical
*Special rules can be confusing in how they interact with other special rules
*Mechanics are initially unfamiliar and not very intuitive
*Lots of terrain is needed for a good game. (new card terrain has helped with this)
*Setting up terrain correctly is a bit of an art form.
*No vehicles (however there are great mechs that fill the heavy support role)
* Inaccessible rules  improved a lot with new N3 rules and youtube videos
*Models are a pain to put together, and hard to paint well unless you are super talented
*Minis are pricey ($10/ea)
*It only works for 28mm scale
*Anime aesthetic puts some people off.  (There are 3 "normal"factions though, and the rules can be used with proxy models)
*Playing against veteran players can be an exercise in frustration
*Unforgiving - poor play is punished severely, and you can't blame your army list
*No proper campaign rules or advancement (Paradiso supplement sucked and doesn't count) 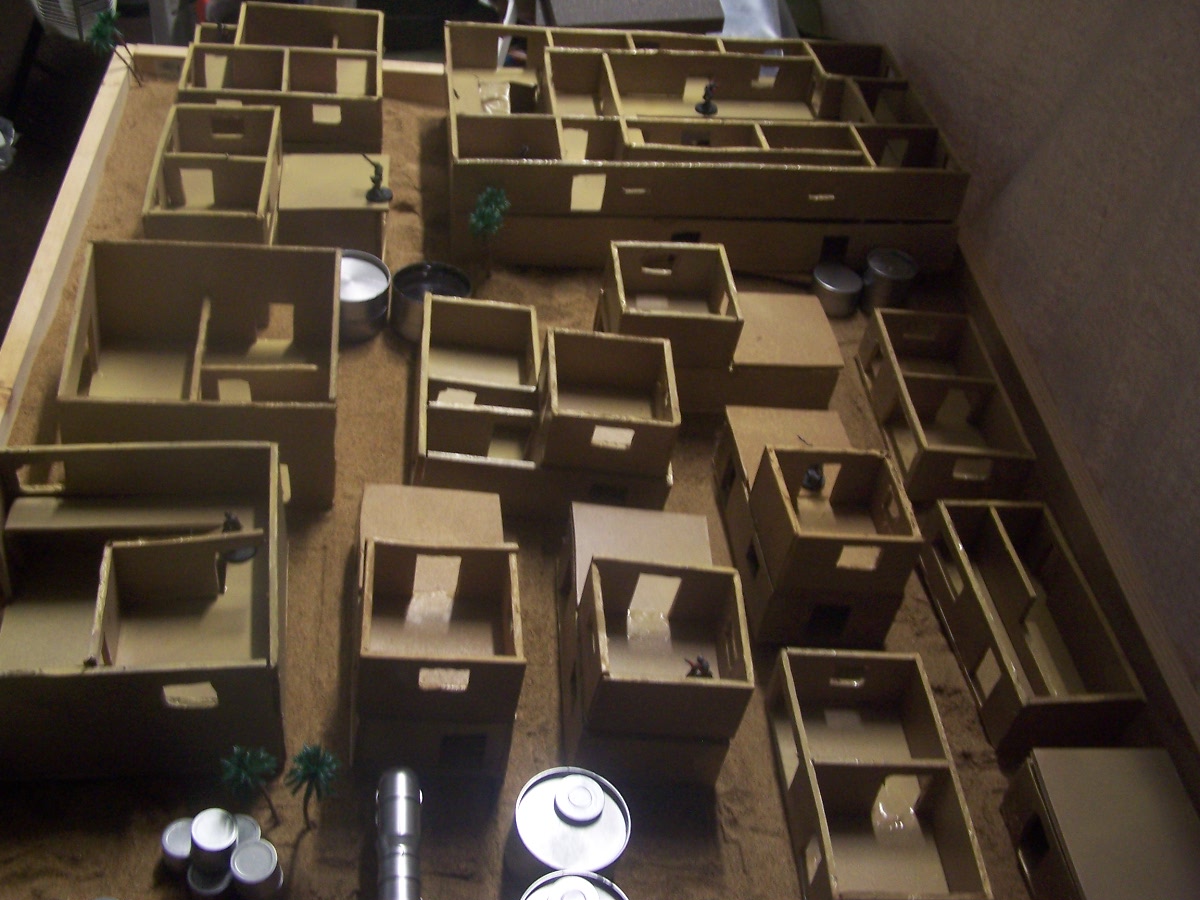 This is more like it! I prefer to have terrain no more than about 4"apart. This was quick and cheap to make.
Now is the hour
There hasn't been a better time to try Infinity.  There are free rules, a new starter set (Operation Ice Storm) with two factions and terrain for $110, and a wide range of $50 starter boxes.  The individual models are pricey ($10ea) but excellent quality.  A single model can transform your tactical options more significantly than a 20-man Warhammer Fantasy unit - and it's more fun to paint!  Compared to most miniatures games, it is very cheap to get into...   ...if you can limit yourself to a single army (I know I couldn't).

The newly released N3 rules show a clear focus on making the rules clearer; improving the game (and the new player experience) without changing the core gameplay. Corvus Belli is widely liked and trusted, and interacts energetically and openly with its community. 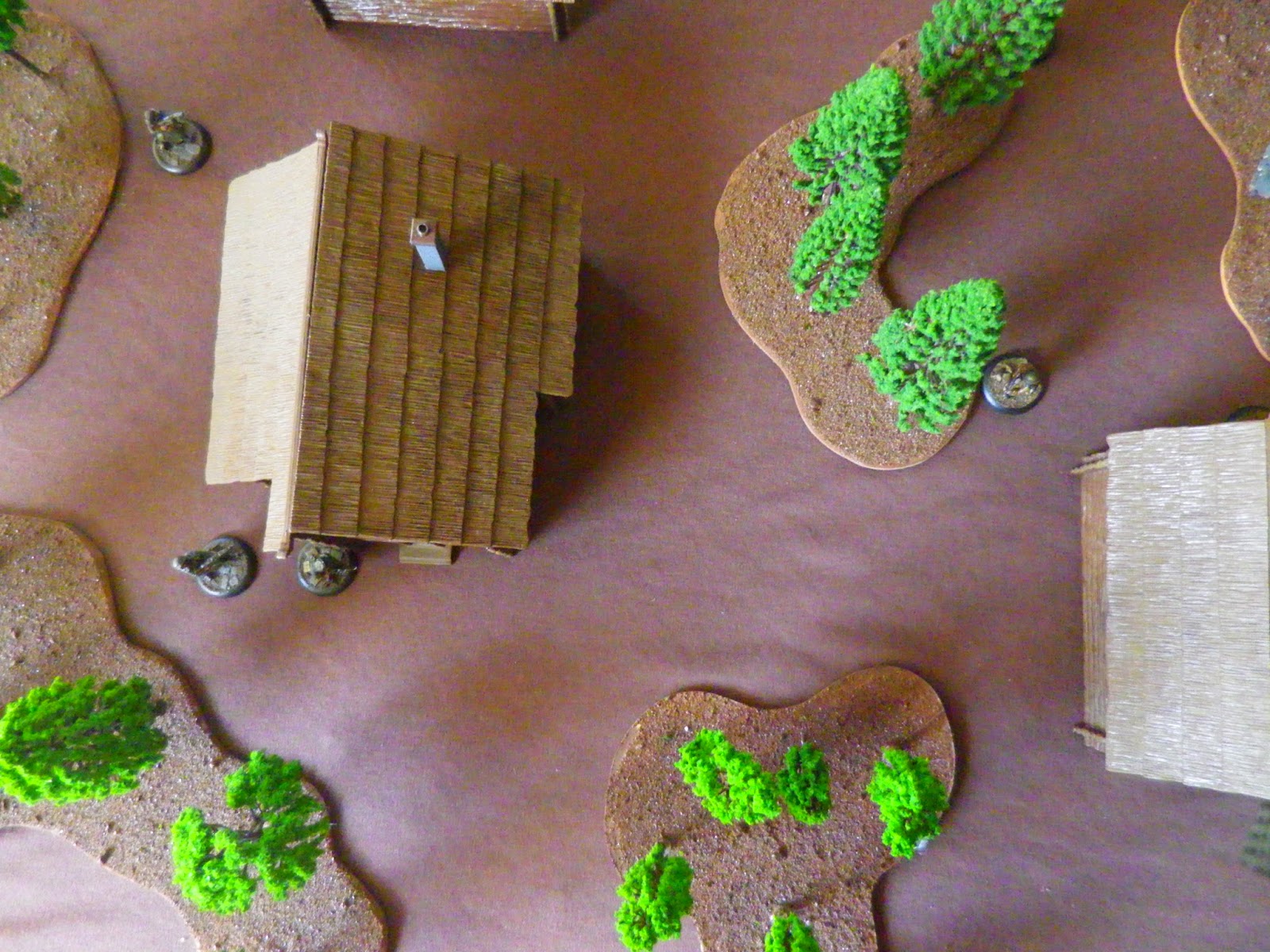 The open area in the centre of the table would be very dangerous to cross.  Smoke grenades anyone?

So how do I get into it?
I'm merely speaking from my own experience, as someone who had to learn it himself.  I'm sure the official forums would have more detailed information, and if you have a local club where people can explain it to you, so much the better. The 250-page rulebook appears terrifying, but thankfully we only need a fraction of it to start playing.

First, download the free new N3 rules.  Print off the quick start (p.10-16) rules. Grab 3 minis each side.  Play.  This will give you an idea for the "flow" of the game.  If you have any difficulty grasping the quick-start rules (which have plenty of diagrams), check out the official youtube videos that explain how AROs, orders and "face to face" rolls work.   This should give you a feel for the game.There is a very handy online wiki but it may not have been updated to N3 at the time of writing.

You may then want to try another game and add in 2-3 more models with some different weapons (sniper rifle, HMG, shotgun) for a bit more variety. 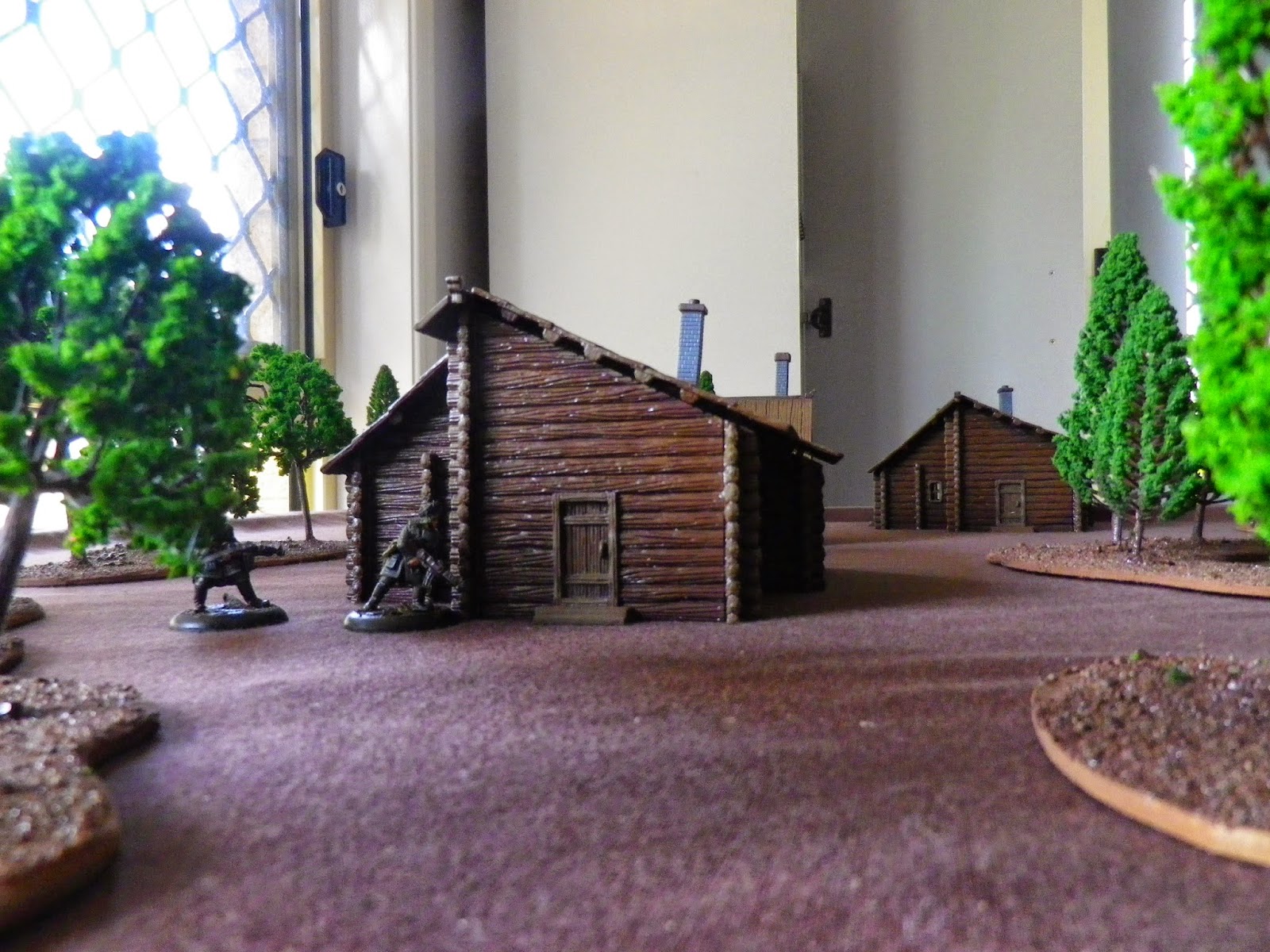 Yes - these aren't official Infinity miniatures but rather Secrets of the Third Reich Weird War 2 troops. The Infinity system also works well for modern combat. And it's free!

After this, it's time to read and print off the basic rules (p.17-25).  They explain things in more depth.  Keep things simple. Adding models with lots of special rules can bog things down a lot.  As you feel more confident, adding a stealth (TO camo) or airborne model can open up the game.  These rules are quite complex.  The youtube videos are helpful to "get the idea," but be aware the new N3 book tweaks some of these special rules. Weapons charts are found on p.251-254.

Remember - keep things basic.  I know all the toys and gadgets seem so cool, but don't pick units with too many special rules or have everyone wielding unique weapons.  You don't want to get overwhelmed - there's so much stuff to learn as it is. I'd definitely avoid hacking early on as it adds another layer of depth - and complication. 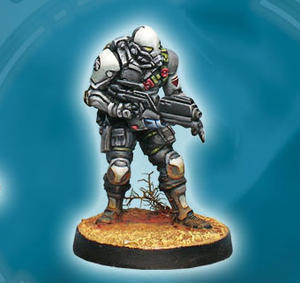 The official Infinity minis encompass a wide range of types, but tend to have realistic proportions and weapons, as well as a distinct lack of gothic skulls, scrolls and spiky bits.

Terrain!!! Make sure you have enough terrain. If you don't have enough, the starter set comes with card terrain (which can be purchased separately). You can scratch build stuff quite quickly as well. Print off and read p. 186-187 for how to set up a table. The placement and quantity of terrain directly affects the gameplay.  A good rule of thumb is to place terrain with gaps of no more than 4" between them and to make sure there are no long "fire lanes" that allow LoS across the table - weapons are lethal and very long ranged. I'd avoid tall terrain to start with as a "clocktower sniper" can cover huge area of the board. A visit to the forums will show some amazing terrain projects as well as tips for quick and easy terrain.   Terrain need not be a chore - this table cost $15 took me an hour to make; the one pictured above took most of the day.

Minis.  Whilst you can get by with proxying, if you're getting the official minis, the Operation Ice Storm box has terrain (<-very useful) and two forces. Otherwise, a $50 starter box is enough to play, though I'd recommend 1-2 extra miniatures.  The dynamic poses and detail in the minis is outstanding, and combined with the low "buy in" tends to make the game an easy "sell" to your gaming friends.  At $10 a mini they aren't cheap, but a single model can radically change your army and tactics, and most games use only 6-10.

Whilst a balanced force is useful, "list building" is not important like in 40K - you don't have to rush to the forums to find the "best" army - because there isn't one.  In fact, asking for the "best army" is a quick way to annoy an Infinity veteran. They have a saying "it's not your list - it's you" i.e. you lost because of how you played, not because of your army list (a tough pill to swallow for many ex-GW players.)  Download the army builder software which will help you make "legal" armies.

Most starter boxes have a reasonable range of forces, but a rule of thumb I'd say more orders is always good (i.e. 7-8 less specialized troops > 4 super soldiers as you have double the orders and tactical flexibility) although you do want some specialist troops.  I personally tend to always include a few "long range" troops (HMG/sniper) to lock down fire lanes and a few "dirty tricks" i.e. airborne/stealth troops who can mess with your opponent by getting behind enemy lines. 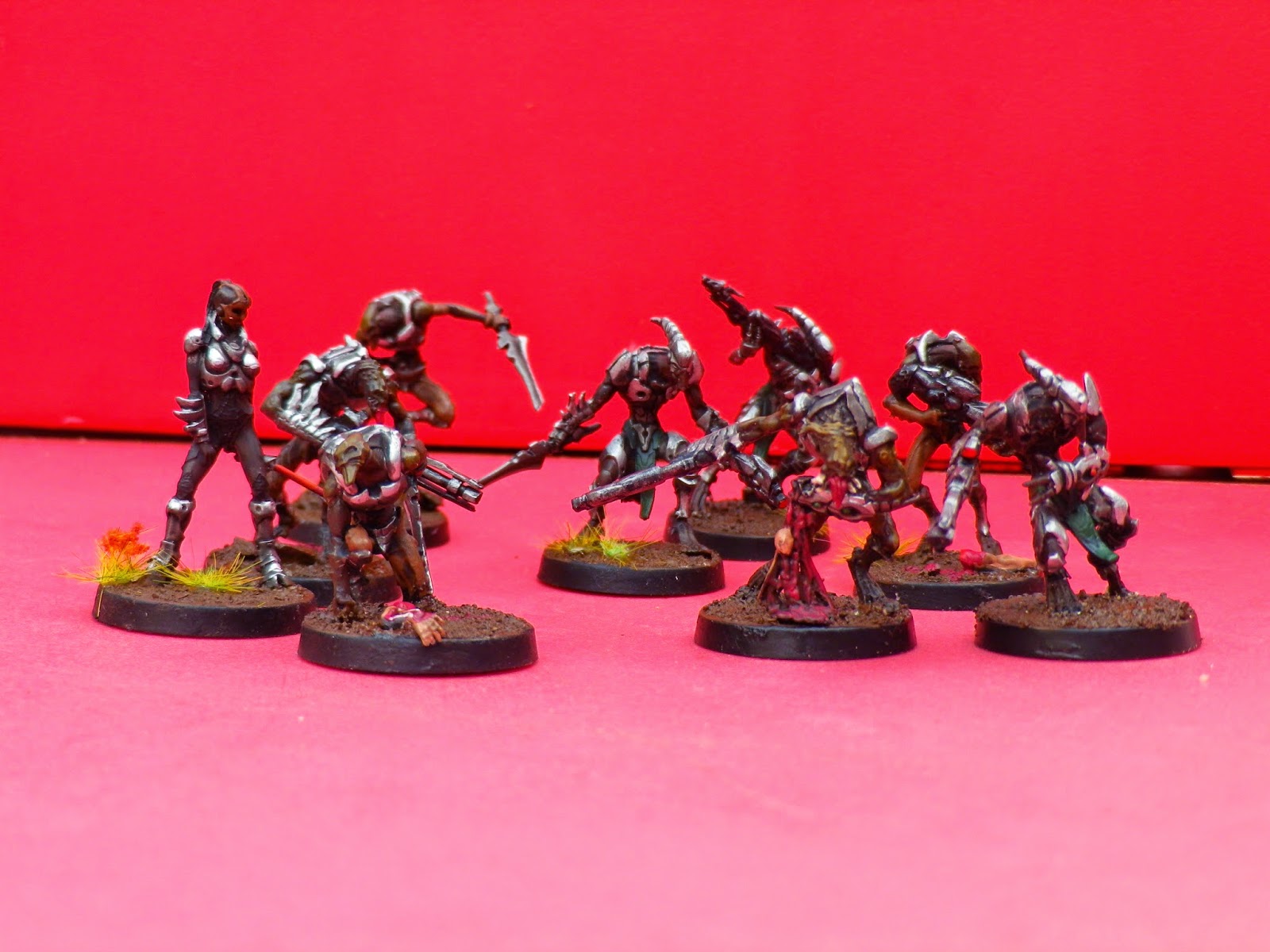 Infinity has a reputation for being "anime" and whilst this is true of some factions, my favourites (Haqquislam, Ariadna) are relatively conventional. The Shasvassti pictured are suitably alien with a Mass Effect/Halo vibe.
TL:DR
Infinity can be offputting due terrain requirements (you need lots!) and special rules (which are numerous and complicated in how they interact with each other). No arguments from me.

However the quick play rules and youtube videos address this, and the rules and templates are available for free.  You can get playing with 6 random sci fi/modern models, a handful of d20s, and 6 pages of rules. You can then add as much complexity as you desire.  It also has potential for modern gaming with little modification, due the move-and-cover philosophy - especially since the N3 rules balanced the weapons (*cough* HMG *cough*).

Corvus Belli are listening to players, trying hard to make the game more accessible. The new N3 rulebook is a major improvement in clarity and presentation of rules.  (Don't judge it by old one - which was written in a kind of "Engrish" and was all over the place).  If you do like the official models and fluff (the sculpts are amazing, albeit designed by a sadist as they are a pain to put together) it's cheap to get into - a $50 starter box and 1-2 more $10 blisters makes a solid force.  The Operation Ice Storm starter even comes with card terrain (which is also available separately.) 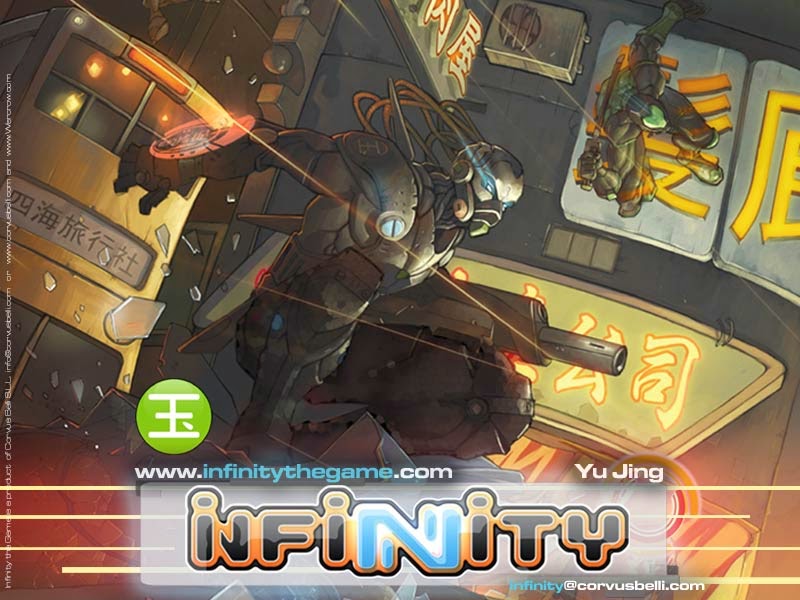 There is a lot of Infinity artwork in the lavish rulebooks - you have a real sense Corvus Belli love their universe.


There is a free online army builder for ensuring you have a legal army, and the emphasis on gameplay vs "list warriors" means you can bring a themed army of your favourite models and actually win with them, instead of being prescribed to use a "FOTM" army.

Infinity is growing fast (anecdotal evidence from some online retailers suggest the N3 rules and new starter boxes are outselling 40K 7th ed counterparts) with a helpful and positive community.  Finding opponents is increasingly easy - and if you don't have local players, just show them the official website - there's enough eye candy there to get others hooked.

But most importantly, Infinity has gripping gameplay, where both players are constantly involved, and every decision matters.

Recommended:  Yes. Did you even read this article? Grab some random minis, print off the free quick start rules and give it a try now.
Posted by evilleMonkeigh at 18:11