I bought this to compare against 7th Voyage.  At only $18 (a third of the price of its rival) how does the Osprey title measure up?

Well, for a start, it is a Song of Blades & Heroes spin-off.  This has a few benefits - a familiar system with an interesting activation mechanic, the ability to faff around creating warbands from random and cool models, and to run a 3-4 game campaign in an afternoon.  A simple toolbox of fantasy fun.

That said, it is pretty much the same game as any other Ganesha title - I can probably copy & paste chunks from my old reviews as they will be just as valid here.   It also shares its flaws - a tendency to lump diverse attributes into two stats, then replace the stats with zillions of special rules - which is problematic in fantasy and sci-fi where the unusual is the norm. 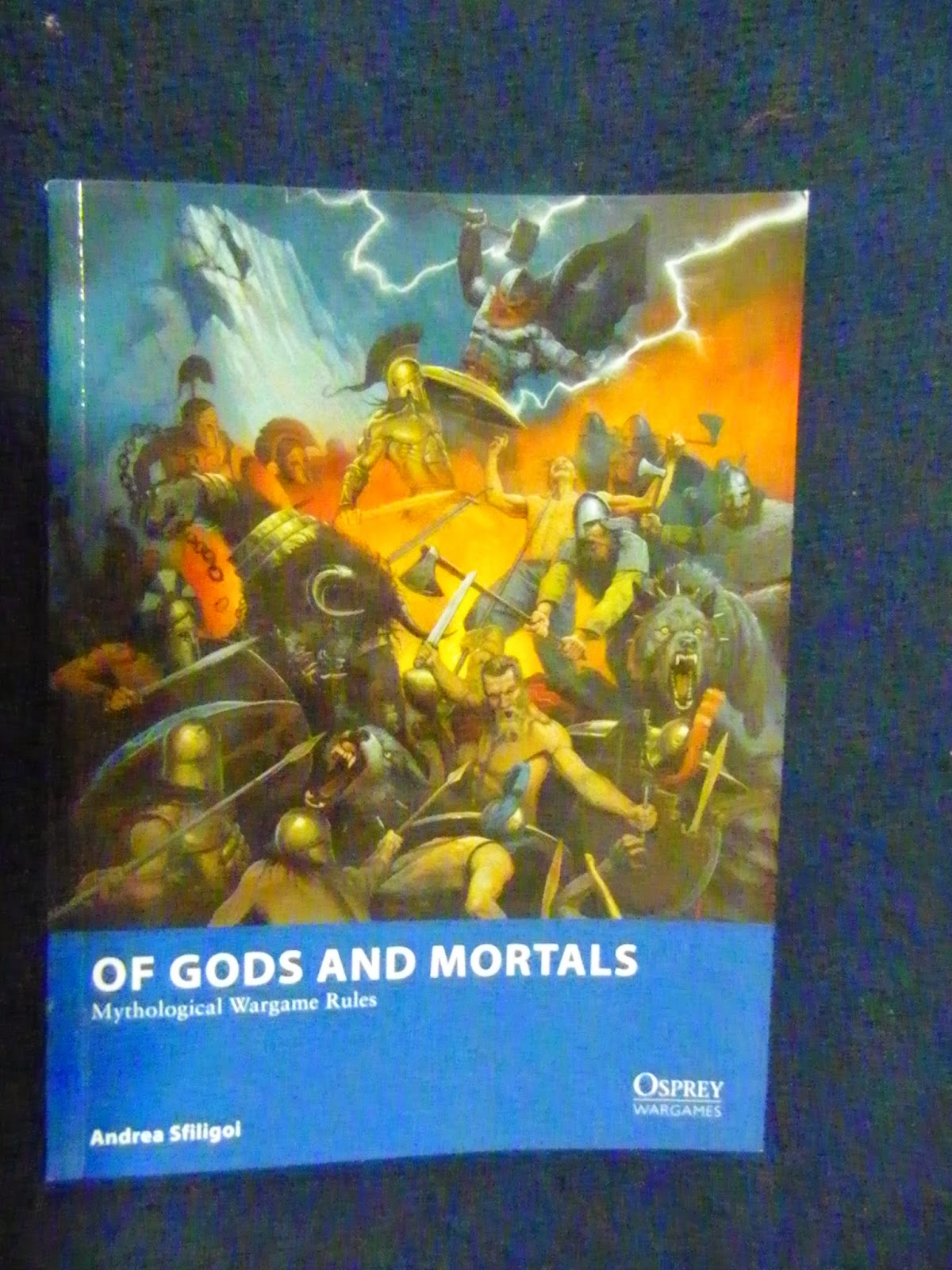 
Presentation (The "Shiny")
One of Osprey's new softcover wargaming series. 64 pages, with quite a nice standard of art (I think borrowed from Osprey's new mythological series).  Quick Reference included (not that you need one) but no proper index for looking things up (something I've noticed quite a few rules omit.)  Quite pleasant for its $18 price tag, I'm quite satisfied.


Mechanics
What I liked about SoBH is that all key info could be noted on a small triangle that also served as a measuring stick.  Allowing only 3 ranges - short, medium, long (approx 7.5cm, 12cm and 18cm) is limiting but is rather easy to remember.

All models had a Q (kinda a 'Quality' or skill) rating (of usually 2-5) - which was important because rolling over this number determined how many activations you got.  Unsurprisingly, Of Gods & Mortals uses the same formula.  It is a pretty nifty one as it adds an element of tactics/risk vs reward every time you activate a model.

Basically, you choose how many dice to roll against the Q, and each success allows an extra action or move by the model. But the more dice you rolls the greater the chance of failure, a double failure means you lose your turn and the initiative passes to your opponent who gets to move until he too fails (or moves all his models).

Of Gods and Mortals updates this a bit. A single failure gifts your opponent with a "reaction" by an equal or better soldier before you act.  In addition, you can choose not to roll the dice and get a free move if no enemies are within  range.

Gods (like Zeus, Thor, Anubis etc) are the most powerful - fast and hard to beat.  Sometimes you can only kill one with another god or by destroying his followers.  Legends (heroes, monsters, or magicians - like Grendel, Medusa, Jason, Hercules, Gilgamesh) are powerful enough to challenge the gods, but are more vulnerable to mortal attacks.  You are allowed up to five legends.  Mortals are the grunts - ordinary crew and footsoldiers, or mythical creatures on par with humans (Amazons, Satyrs).  Mortals come in groups of 4-8, and fight in close (better combat) or open (better mobility) order.

Gods and Mortals have a synergy; the mortals can perform invocations instead of activating  This can summon the god, give a god extra dice or bring him back if he is slain.  The God can inspire his mortal followers, improving their morale.  He can give them extra activation dice if he is close by.  A god is weakened if his mortal followers are lost, who in turn have morale issues if they see their god slain. 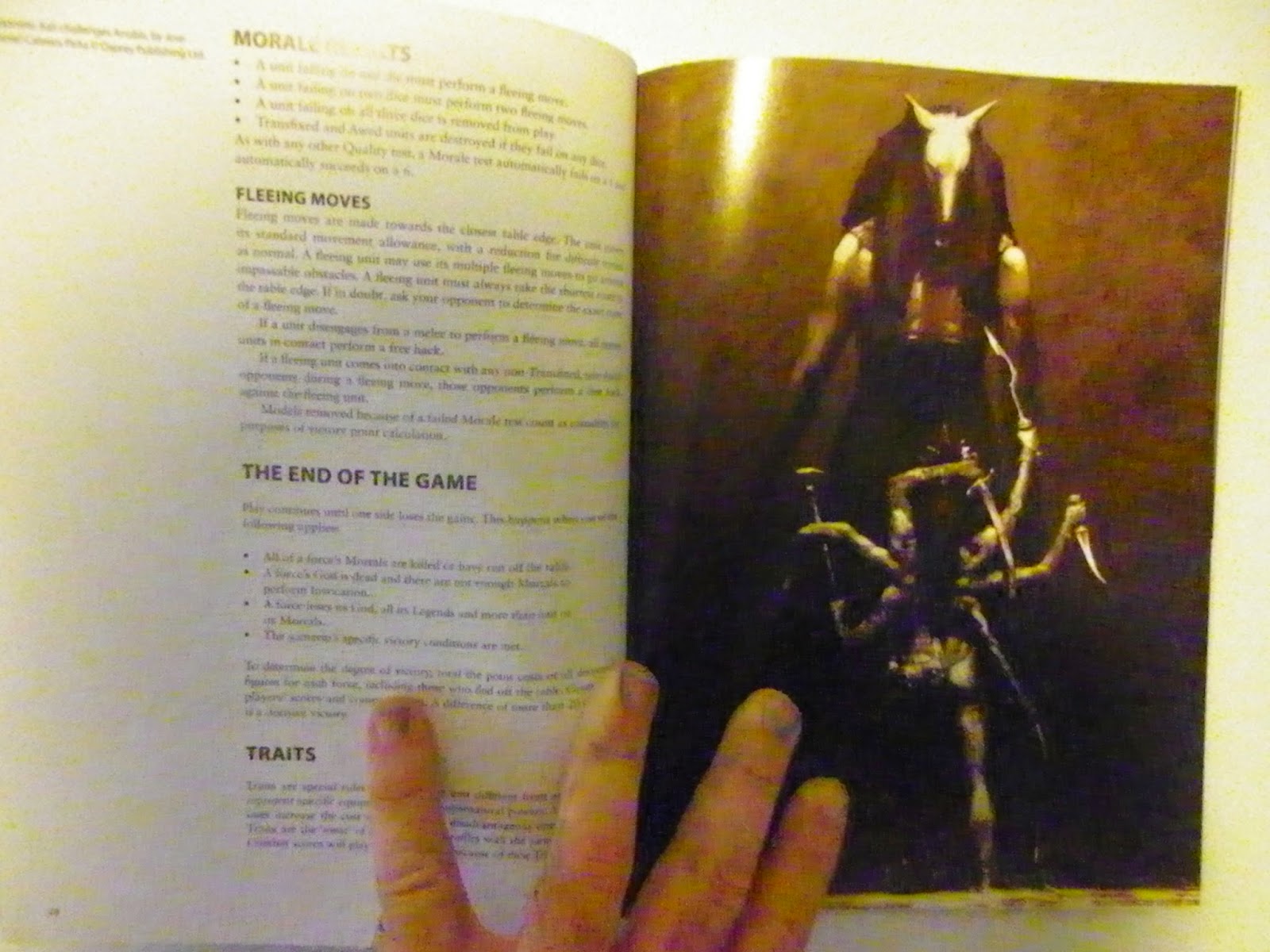 Some of the interior art was quite good.  I liked the Kali vs Anubis (by Jose Daniel Cabrera Pena) which evoked Frazetta covers


Movement
Terrain rules are pretty vanilla and modify movement and firing in simple ways. Movement is either short, medium or long.  One noticeable feature is all movement is in a straight line - if a model wants to turn at all (say to dodge an obstacle), it must spend another action.

Combat
Troops add their C (Combat) skill to a die and compare them.  Each 3 you beat your opponent by inflicts 1 casualty (a bit different than the old SoBH resolution).  The side who takes the most is pushed back.

However gods killed by lesser ranks (legends, mortals) can pass a Q check and simply be knocked down instead.  Legends can similarly "save" against hits by mortals.   Gods who tie in a clash with other gods create a blast of energy as they crash together that may knock down legends or awe mortals nearby.

Firing works in a similar manner, only with different modifiers.  (Also, the target cannot hurt the firer back.)  Extra activations can be spent on Aimed Shots or Power Attacks to add +1, +2 etc bonuses to rolls.

Morale
A check is made in certain situations. i.e. lose 50% of models, their god is killed, etc. Three dice ar e rolled - one or two fails results in 1-2 fleeing moves, but three fails sees the unit removed.  I miss the old SoBH "gruesome kill" rule though - if a combatant tripled his enemy's score, he killed him so messily every enemy nearby had to take a morale test as they were splattered with gore/dismembered body parts.)


Special Rules: Traits & Abilities
I often have a swipe at Ganesha for their stats-v-special rules ratio.  Unit have only two stats - Quality (which is used for morale, reactions, initiative and agility - pretty much anything that isn't combat)  and Combat (which is strength, shooting, weapon skill and dodging missiles). As you can see, they are very broad categories, with some very disparate abilities.  Pretty much all Gods are Q2 C4-5, Legends are Q3 C2-4, and Mortals are Q4 C2-3.  Accordingly, a lot of detail or "differentiation"is lost, and like SoBH the game relies on its "special rules" to differentiate between races/units - most units have 2-4 special rules.  Where most games have an overall total of 20-30 special rules or 'abilities', Of Gods & Mortals has 75. 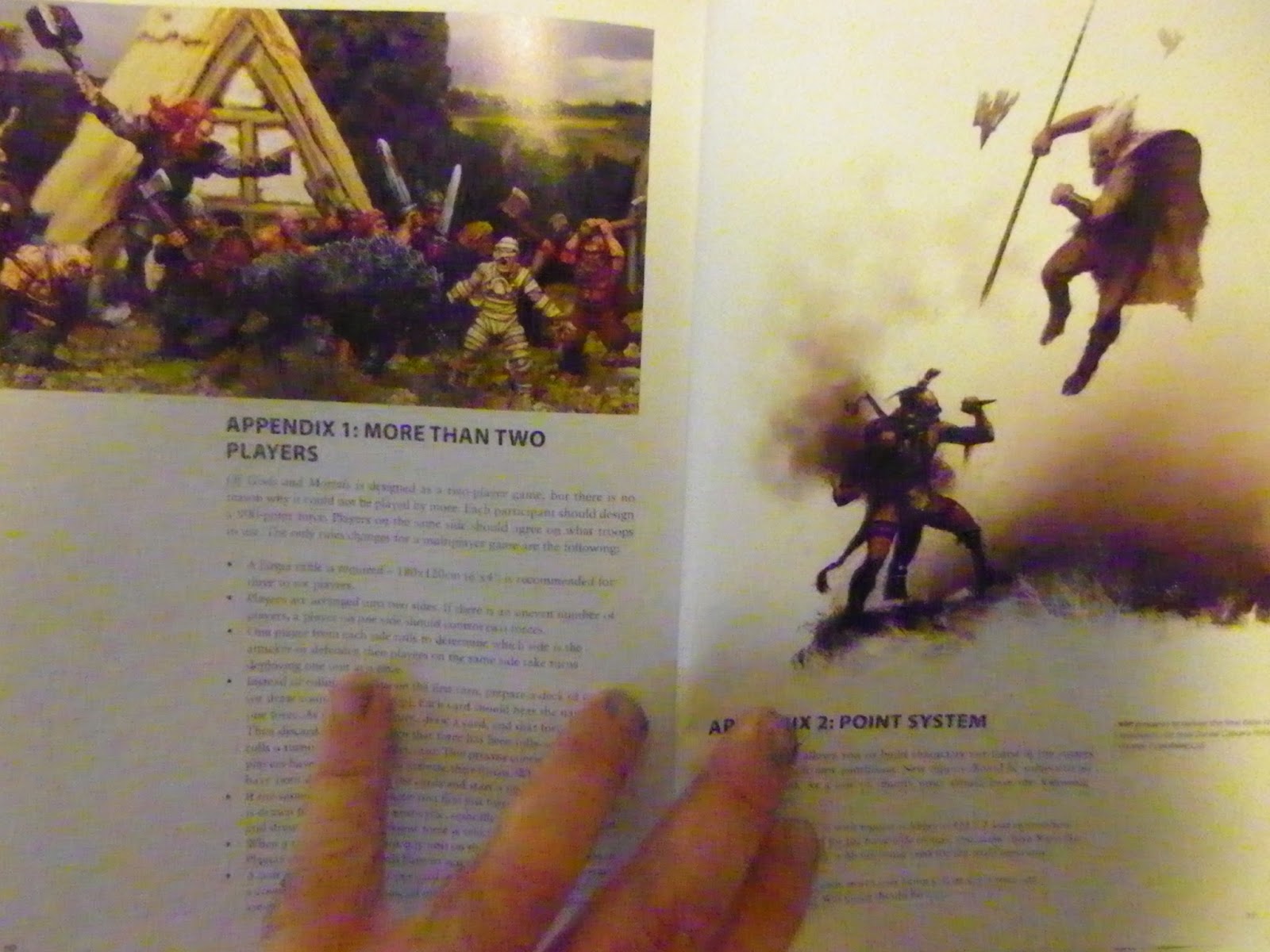 Although it isn't hardback, I liked the interior better than the pricier 7th Voyage. I enjoyed the ideas of gods from different cultures duelling - here Odin attacks Tezcatlipoca.


Scenarios & Campaigns, Unit Builder
There are a few, rather limited scenarios - fighting over temples, sacred groves, sacred cities.  Most Ganesha games shine at short campaigns (3-5 games) which can be completed in an evening due to the fast-playing nature of the rules.  Very simple campaign rules are included - the nature of the game mechanics means you can't really level up stats though.  There are sample warbands for various pantheons of gods, legends and their mortal followers - the  Greeks (Zeus & Co), Egytians (Anubis, Set and the gang), Norse (Odin, Loki, Thor etc), the Celts (Balor, Cerunnos, Dagda). The lack of a proper campaign/progression system is a bit of a drag, as Of Gods & Mortals lends itself well to playing a series of quick games.

However the star of the Song of Blades series is always the simple unit builder, which allows you to stat up any model in your collection.  It's like a box of LEGOs - I reckon I've spent more time creating warbands and painting them for Song of Blades than I've actually spent playing the game.


TL:DR
Activation system is tactical and balances risk vs reward - this is a cornerstone of the successful Ganesha formula. The lack of a good, fleshed-out campaign system is noticeable, and I think the "two stat, million special rules" system is not an ideal choice for fantasy, but the gameplay is simple and cinematic, and can be taught to a new player in a few turns - they are a great series of rules to teach to kids or new players.  The book is pleasant and priced very competitively for an overseas buyer ($18 vs $60 for 7th Voyage).

- lumping random stats together makes units too similar
- stats lumped together do not always make sense (morale, and agility? strength and archery accuracy?)
- lots and lots of extra rules to compensate the lack of stats
- more of a casual pick up game than a gaming "staple"
- needs to use a d10 not a d6
- no proper campaign system
- scenarios a bit sketchy

Recommended: Yes.  Though not perfect by any means, it is a good casual game, with an interesting activation system. The unit builder is great fun. Although you could easily play mythological games using Song of Blades, Of Gods & Mortals is different enough from its parent to be a worthwhile standalone.  It nudges 7th Voyage into second place in the mythological skirmish sub-genre.
Posted by evilleMonkeigh at 05:54