For those surprised by my somewhat benign review of the Robotech RPG Tactics rules (verdict: unnecessary hitpoints but mostly fine), you may be asking - is it worth diving into this game?

My response:
Do you enjoy doing 1000-piece jigsaw puzzles?
Would you enjoy doing that same puzzle a dozen times in a row?
Do you enjoy doing Tamiya model kits without instructions?
Do you find having missing/poorly sized pieces a "fun challenge"?
Do you enjoy using tweezers? Were you a legend at playing "Operation?"
Do you like the texture of copious dried superglue encrusting your fingers?

If your answers to all of the above is "Yes!" then you will enjoy the Robotech RPG Tactics models.

Basically, the miniatures are all like mini 1:300 versions of 1:48 Revell kits rather than wargaming pieces.  It's like they have no idea who their target audience is:
Hobbyists - who enjoy assembling stuff are better off with large, detailed kits?
Wargamers - tend to view models as playing pieces, and don't want to spend 12 hours assembling?
Boardgame/RPGers - who tend to have even less patience for assembly than wargamers?

Basically, they've made a product that combines the worst of all worlds.  It's too tiny to be a good display model, and too hideously complicated for a gamer.

There is a ridiculous amount of parts for such tiny models - a Valkyrie battleroid (the same size as a 28mm mini) comes in 16 pieces.  Heck, I've seen 1:300 jet models that had similar detail - cast in ONE piece.

*The sprues are not numbered, and they really, really need to be
*Many fine details (antennae, guns) were damaged on the sprue due to their layout
*The instructions are vague and do not cover all layouts clearly; there's a lot missing
*Some weapons/arms must be assembled in a particular way (this is NOT explained)
*Most of the multi-part pieces are completely unecessary. They split things into 3 bits where one would do. It's a 1:48 model shrunk to a super-fiddly 1:300 scale
*It's obvious the parts were designed by computer software, by someone who has never played wargames (or even assembled a model) 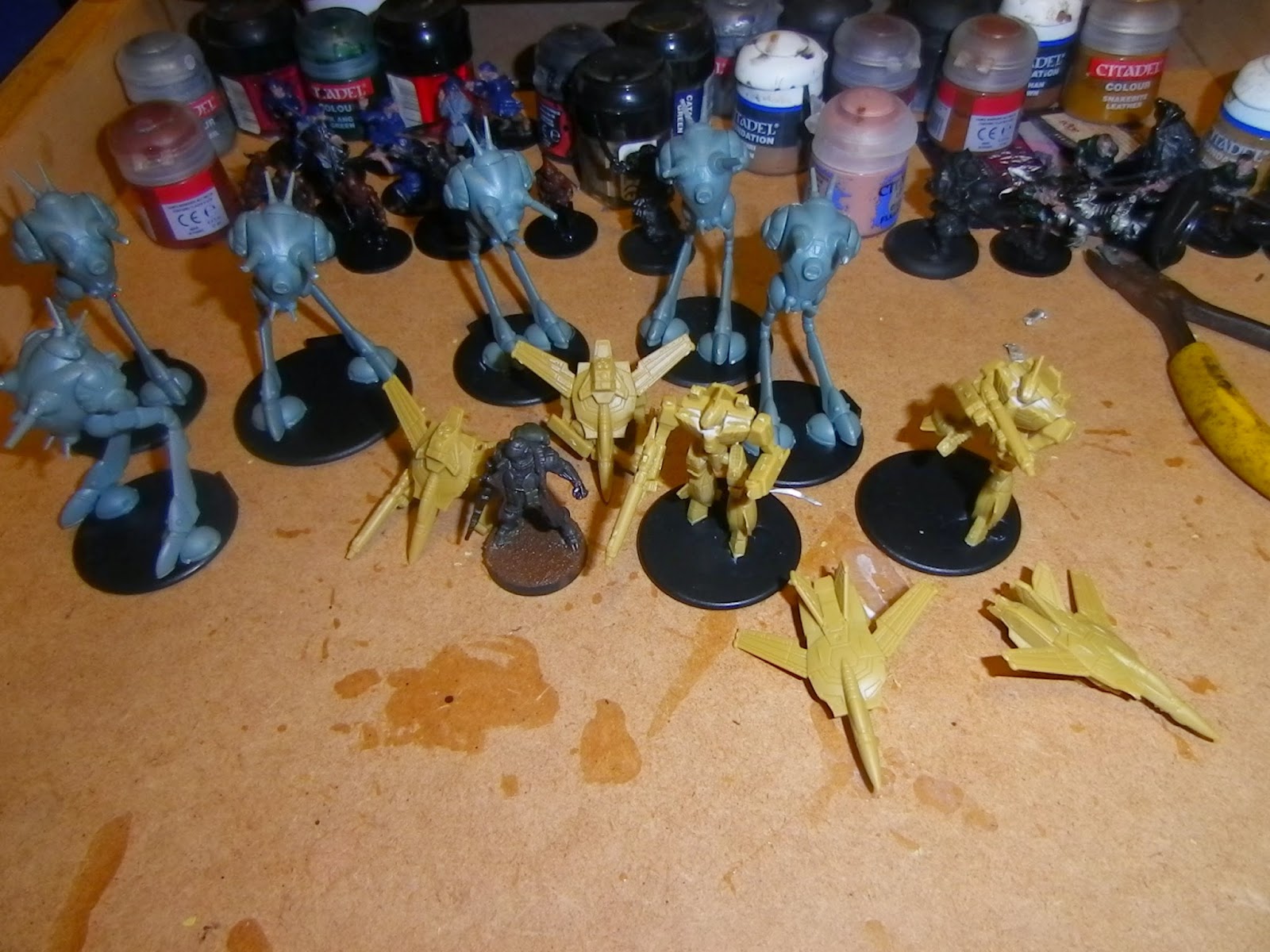 These dozen miniatures took about 5 hours to assemble....
I'm not a talented modeller, but reasonably experienced.  That said, I could probably work a bit faster with proper instructions

I calculate the models take ~20 minutes each to build (and I'm not very pedantic/particular) - which means I have another 10+ hours to simply assemble the rest of the starter set.  The fact each Veritech comes in 3 "modes" means you have to assemble 3 models for one playing piece simply compounds the issue.   The only upside to the models is they look about right to go with Battletech models from pictures I've seen around (I only have converted clix at the moment so I can't post a scale photo sorry).

The dice, unit cards, and counters (there isn't enough for the UEDF who need more than 10) are pretty mediocore quality so don't add a lot of value to the box.

Although value wise, it isn't that bad.  My starter box cost $110.  If we subtract the quite decent rulebook ($30 is about usual) and the rather poorly made dice and cards ($10 is very charitable) - we are left with $70 for 34 models - about $2 each which is very good, actually.    Ignoring the rules and stuff makes the pieces worth $3 each which is still good, although expansion boxes seem priced much higher at 4 for $35 ($9 ea mini) which would make adding to your army a tad pricey.

TL:DR
Whilst the value in the starter box is quite solid, whoever designed the minis deserves to be locked in a cell, and forced to assemble them for the rest of his life.
Posted by evilleMonkeigh at 06:49