These aren't actually a combined force - I just happened to paint them at the same time. The landspeeders are for a high-tech desert tribe whereas the gritty rebels are a Terminator hunting force who will use more conventional vehicles. 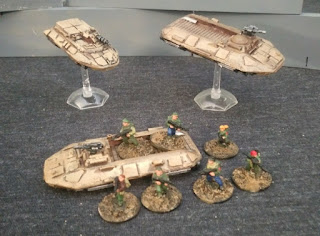 The minis are pretty bright (like all my 15mm) but I'm lacking a good olive (GW paints only in my area) so I may need to wash the uniforms to a more dirty brown-green. 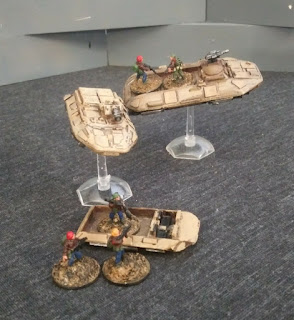 My daughter was delighted to see some female rebels and was very interested in this force. Drats - now I'll have two people pillaging my mini collections (My recent return to 15mm was due to their superior resilience when dropped by a 6-year-old boy - the washer base flies off, but the minis are so far unharmed) 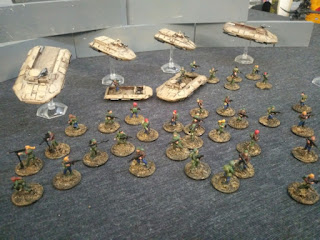 The rebels are from Khurasan, from memory, and the skimmers are from GZG.  In my home made game, the rebels will be a low-tech army resilient to hacking, but due to lacking their own mechs, weaker against demonic possession and magic.

Hmm - now where did I put my 15mm Terminators?