This is one of the last of my 15mm armies.  I only have some Shivan Witches, and the rest are small 'dozen minis or less' random purchases. After that I am switching to 28mm Mantic*; for my "demon-possessed stormtroopers vs rogue AI vs scientists with pet monsters" homebrew sci fi horror rules.

*I could possibly review the 2nd Ed Deadzone rules, but it may be a waste of time as 3rd Ed is coming... 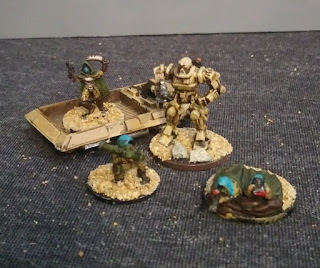 Why that shade of blue headgear? Well the bloody Privateer Press paints are in these horrible lids that crack around the edges and let air in, so I feel like I have to use them before they inevitably dry up.  Why everyone can't use a sensible squeeze bottle like Vallejo *shrugs*. The mecha are also Rebel minis and come with a range of weapon loadouts you can choose (including shields and melee weapons). As usual I choose neutral paint schemes for my mechs as they do double duty in 6mm games. (All my mecha are grey, tan or olive for this reason). They are giant mechs next to old Epic infantry, who barely come up to their knees. 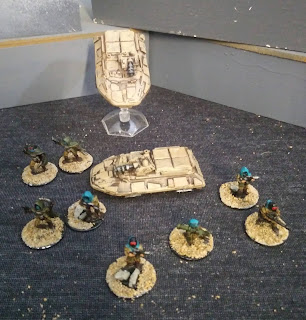 The skimmers are the GZG ones I painted last week; with an eye to using them for this force. Still have some $1 dune buggies from K Mart I could add...

As usual, I enjoy painting 15mm as you can do an army in an hour or two. The Sahadeen are a little small (I prefer my 15mm on the bulkier side) but they are very useful, versatile sculpts - I could see their hoods and masks being useful as generic cultists, vampire acolytes and even snow troops, and I have accordingly left a dozen or so unpainted for that purpose, later down the track.

Although I've painted up no fewer than seven 15mm forces in the last fortnight, this is only half my 15mm forces - I also have table-ready GZG UNSC, Khurasan Felids, GZG Prawns, GZG New Israelis*, some mostly-GZG I painted in 2015; and a sister army. Or at least that's what I can see in the cupboard. Who knows what further digging in the shed may reveal? The ability to buy a 40K-size 15mm army for $50-$60 back in 2015 or so was obviously addictive.

*I am due to take all these out and check them for damage/rebase if needed and I can do some daylight photos if anyone is interested. These photos have been pretty poor as I paint and photograph at night - without my kids around to 'help'

Nostalgically, I remember the postage times of yore - GZG was famously fast - once I ordered some minis on Thursday (from UK) and they arrived (at my door in Australia) the next Monday.  Fast cheap postage - something I'll be able to tell my grandkids about - and they'll never believe it.