Making units for my homebrew 15mm rules has reinvigorated my 15mm collection. I've found unpainted minis that predate my 8 year old!  I used to spend a lot of time with 15mm rules (namely Tomorrow's War) but got a bit sick of the "Vietnam in Space" most rules espoused - basically modern combat with the odd mech thrown in or a copy+paste of Stargrunt or 40K.

Where were the nanite swarms? The portal guns?  The virtual Tron combat? Why am I playing a sci fi game that feels historical?

15mm minis are to be frank, a bit dull compared to their 28mm cousins, useful mostly because of their ease of painting and cost. They are also great for combined arms platoon level+ games (both affordable AND vehicles don't look ridiculous on the tabletop). 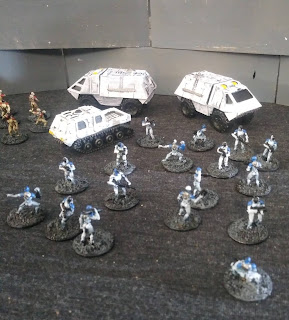 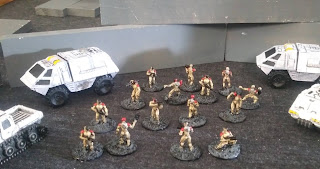 Yes there is a definite Clone Wars vibe - Stormtroopers vs Separatists - I may have been playing 2005 Battlefront with my son lately.... (He likes Darth Maul)

The wheeled vehicles are just $1 from the local bargain shop, with 5min each spent painting them. 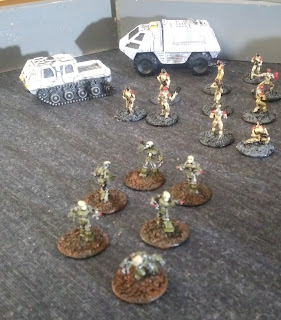 These clunkier bots act as support troops to a squad. I'm unsure of their provenance, probably Khurasan or the old Critical Mass.  When your fire team's mind can be paralysed and broken by unholy terrors, it's handy having a emotionless AI along to lay down suppressive fire.

But what if the AI of the derelict station you are exploring has gone insane, and turns your own squad robots against you? #RejectTheFirstLaw