These were actually mostly random toys - $1ea from the junk shop - with only the half tracks as 'legit' resin wargaming pieces (Khurasan, I believe). In fact I think the tanks came from a literal bag of those plastic army men. (If my son leaves his toys underfoot in the shower, they deserve to be confiscated) 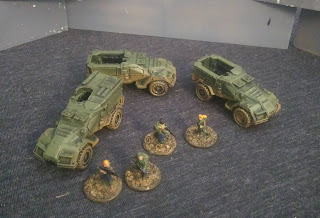 These were the only proper gaming pieces.... 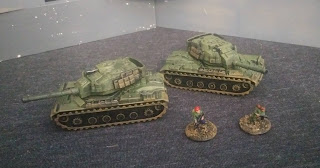 Considering it was a $1 plastic toy with 2 layers of olive and some drybrushed brown dirt, I'm pretty content with the armour support... 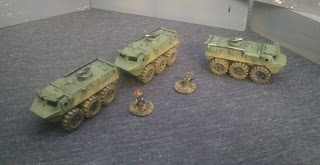 The APCs were $1 off-brand Matchbox fire trucks. I remove the fire hoses and added a 28mm handgun to be the remote controlled HMG-thingie.

With the Khurasan half-tracks, this force was $32AUD. Without them, it was $4. The more I think about it, the more I think wargaming vehicles are insanely expensive.

Die cast steel WW2 tank from toy shop - $1. Same thing, same level of detail, in resin $~10+.  Sometimes (in the case of many WW2 kits) you can't even claim it's a limited run boutique model.

Even if I'm not currently sure what I'll use them for, I love powering through my unpainted 15mms - this was one in 40min after tea (and I also did a dozen remotes and mechs which I didn't fully finish).

The end is in sight - I need to tidy up and base another 3 armies which are all pretty much done or previously basecoated, add some extras to my D9 Prawns, and Tigrid armies, as well as do up some Shivan Witches (who will be flying in a 40K-sized Dark Eldar Strike Barge.) and some Meso Nai power-armour salamanders. Then - I'm done.  I think. Unless I unearth more stuff in my hunt through the shed.