While hunting cheap 28mm sci fi for my homebrew horror rules, I've been really impressed by Mantic's price:content ratio. Their pricing (~$1.50AUD a mini) is excellent and you get a lot of bitz in the box.

The box was for 20 minis, but if I had more legs and torsos, I could make another 10-15 minis with all the extra arms and heads in the box. 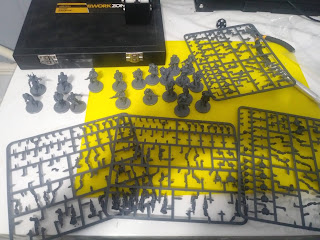 I don't think I repeated a single pose, and I have two very different squads - 10x not-Starship Troopers/Imperial Guard "grunts", and 10x not-Halo/Kasrkin "marines" - thanks to the extra heads, backpacks and weapons. 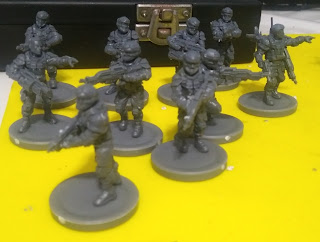 While they have plenty of easy-painting chunky detail (i.e. without the fiddliness of Infinity) they are much nicer, better proportioned and posed models than my blocky, potato-head/banana-handed old IG Cadians and Tau. And these are $77AUD for 10 - $7.70ea vs the superior $1.50 Mantics. 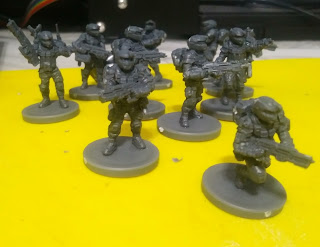 New arms+weapons, heads and backpacks have transformed the models enough to be an opposing force or a complementary "special forces" team. I used extra grenades and sidearms to further differentiate from common grunts.

This box is extremely useful for generic sci fi forces; I'd go so far as to say it is the budget sci fi version of the versatile Perry plastics - I already have plans for the leftover bits (mixed with medieval armoured torsos, swords and legs) to make a crusader faction.

I found them reasonably easy to put together (each arm+gun set is labelled A, B, C etc) with only very occasionally trimming off bits of flash and they responded well to my el cheapo superglue. This is a better set than the Enforcers and I'd hazard a guess that they are a later release - they are a more polished sculpt.

Once these lads have been painted up, I should be ready to start seriously testing my homebrew rules in 28mm at "Necromunda" scale as I've moved away from the 15mm fireteam based version.