I am usually a bit critical of the repetitiveness of 2HW rulesets (ever seen a 2HW game that did NOT have 2d6 rolled against REP; or 2d6 on a single chart to damage?) which use the same mechanics whether they are suitable or not. It must be in the rule-writer's contracts: that, and making the rulebooks difficult to read ("you must make to so they have to visit our yahoo group to have things explained to them, so our yahoo group gets moar hits").

That said, I rather think the mechanics might work well for a skirmish gladiator game where the 2HW strengths (usually a very thorough campaign/lite RPG system/scenario generator) would be showcased. 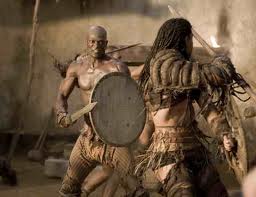 The Shiny
This is a pdf so as usual I'm not wildly excited. That said it somehow doesn't seem as unintelligible as the usual 2HW layout. Perhaps they sacked their editor. Or it's a different author. Or perhaps I am less critical of a pdf. Anyway I found it much easier to read than usual.

Random gladiator creation can encompass large, strong gladiators or smaller faster ones. They also have "Signatures" which are like traits - they can add to agility, strength, resilience - or weakness.

Players can then choose how to spend points on attributes of speed, training and strength. Players then get bonus dice equal to their total attribute points. They then can choose the gladiators' primary style of fighting and secondary(less effective) styles; i.e. murmillo, retarius, secutor etc, and weapons and armour type.

Combat
Gladiators move individually, in an alternate movement of sorts. They fight any foes in the same zone in the arena (the arena is divided into 13 sections - battling in the centre section makes you more popular with the crowd). Gladiators move from one movement zone to another. Nets and thrown weapons may be hurled into adjacent squares.

Move
Gladiators add speed + 1d6 to see who acts first.  Bleeding or stunned gladiators are penalised.
Gladiators can move in and out of enemy occupied squares but not through the side of the square behind the enemy.

Maneuver
Gladiators who end their move in the same zone will fight.  Roll 1d6 each point of skill "Savvy".  Also you can add any bonus dice (which once used are gone for good - a kind of resource of stamina, as you were).  Compare the successes (any d6 rolls of 1-3) and consult a table (aptly named the maneuver table).

Attack
Some maneuvers result in attacks.  Again, roll 1d6 each level of skill, and choose to use up bonus dice if you wish. Consult another table (the attack one, this time). You can bash enemies to the ground, entangle them in nets, and kick sand in their eyes (my personal playground favourite). 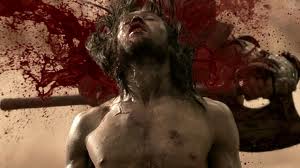 Without even rolling on the damage chart I can tell this one is a "bleeder"...

Damage
Can be done to individual body parts. This entails a tad more recording than I am comfortable with but includes arms, head, chest, stomach, legs etc.  Gladiators can be knocked down, bleed severely, etc.  Gladiators who catch their breath may regain the bonus dice they used.
There are quite detailed rules showing a gladiators chances of survival if he is unable to continue the fight.

The base rules were only 21 pages and I was favourably impressed.  In fact the mechanics were NOT the usual rehashed 2HW stuff but had a slightly different flavour.  You can wager on matches or start a gladiator school (ludus) and gain wealth by winning matches and selling gladiators.

Campaign Rules
Usually a 2HW strength, and did not disappoint. It has rules for injuries and recovery, fame and gaining freedom. Fame can be used to raise attributes, and is gained proportionate to the skill of the opponents defeated.  Slaves can be bought and trained up, or a pre-trained gladiator purchased.  You can stage a "Triumph" or "Hunt" special events.

Beasts are included and can be maneuevered using automatic dice-based reaction rules, as can NPGs (non player GLADIATORS - I see what you did thar) making solo play very viable.


TL:DR
Streets ahead of the over-complex Morituri te Salutant and a more flavorful alternative than the simple bland MacDonalds of Warhammer Historical's LOTR-clone Gladiator. Damage is a little more complex than Gladiator but the gameplay is more interesting with the 'bonus dice' adding an element of resource management.

The usual 2HW jumbled mass of tables and errata is absent here; the Red Sand Blue Sky rules are cleanly set out with only a few tables at the back of the book in a quick-reaction sheet of sorts.  Still not perfect but definitely their best rulebook I've used to date.   It has a thorough campaign system and gladiator creation similar to Gladiator but RS:BS is more conducive to solo play. The yahoo group I alluded to at the start of the review is very active and helpful: I can say the same about the 2HW head-guy Ed, who seems active on forums.