Empire of the Dead Miniatures Review

Due to report card time approaching I have little time for gaming, painting or blogging.

However I just received a parcel in the mail - a box of minis for the new game Empire of the Dead by the same guys who did Secrets of the Third Reich (West Wind Games).

The SOTR minis I have are characterful but rather chunky and not always proportionate.  On a score of 1 to 10, with "9" being the newer Infinity sculpts, "7" for the newer Malifaux figs and "6" being your average GW offering, I would rate these a "4".  (I reserve a "2" for the unpleasantly mis-shapen Rezolution minis)

So I was interested to see what I would get in my "warband boxes".  Costing $30 (22 pounds) for 8-9 minis they are cheaper than a Malifaux box at approximately $4 per mini.

I must say I was pleasantly surprised. 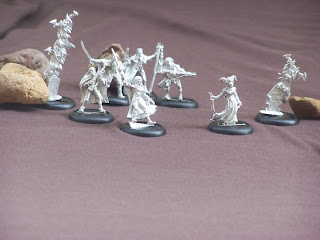 The bat swarms are a bit lame - I'd rather have had an extra vampire or thrall.

The castings are all one-piece models which I prefer; as it avoids frustration (AE:WWII/GW models) in fitting multiple arms + weapons simultaneously; missing parts (Infinity models - 3 of 20 models I've bought lately had missing parts, which were admittedly replaced swiftly) and the time delay in assembly.

After all, "customization" can be supplied by simply not painting a model the studio colour scheme, an obvious fact that seems to escape 95% of gamers. 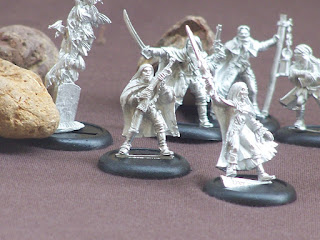 This is the vampire faction.  Models are photographed as they have come out of the box with no trimming of flash etc.

I found them crisp and clear - a marked step up from West Wind's SOTR designs. They strongly remind me of GW's metal LOTR minis in design style and quality.  And given those retail for $11 each here in Australia, the EotD unit box doesn't seem such a bad bargain. 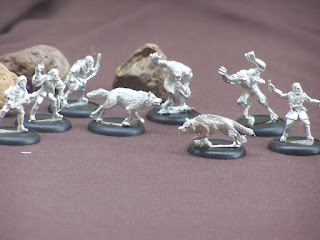 The Lycoans were my favourite faction. West Wind has some experience sculpting werewolves (in their SOTR line) and indeed the werewolf sculpts were the best in the box. 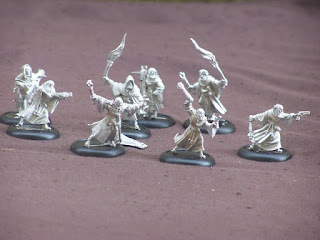 The robes "flow" well and will drybrush/highlight nicely.

The Brotherhood figures were rather good. I have never liked mace-wielding minis (a reason I have never enjoyed Menoth in Warmachine or any of the Dark Age line) but when accompanied by a revolver they are kinda cool.

All the minis would be useful for other games - the Brotherhood militant priests in particular - so fantasy/gothic/VSF fans would benefit from grabbing a box or two.

I will do a WIP of painting and also a rulebook review (and one of the Victorian zombies and gentleman box sets when they finally arrive) when time permits.

TL:DR
Overall, I give these models a "6" and reiterate the fact they remind me of GW LOTR figures in scale and size, with a slightly more heroic bent. Facial features and detail are 'finer' but simple; without all the busy 'clutter' of a GW sculpt. They are a definitely step up in sculpt quality from West Wind's SOTR designs.