This is my last, and favourite army.  As with all my 15mm, their bases are incomplete, which detract from the models.  However, these have my usual muted paint scheme and, I feel, carry it off better than usual in 15mm (where few colours and strong contrasts usually carry the day). 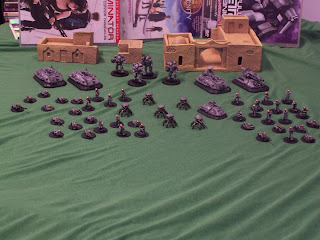 The bronze visor contrasts well with the grey and the drybrushed grey layers well enough to avoid the need of extra colours.  A little bland for some, but I prefer my troops in plausible paint schemes rather than bright yellow, blue, green or red armour worn by the marines of a certain company.

I feel drones will be more common in future battlefields in fire support roles, so I am increasingly including them in my armies, to the rate of 1 per squad or fireteam. The GZG spider drones are my favourite and will also star in my Terminator-themed army (which is a WIP).  They ride clamped to the top of the APCs until they need to deploy.  They will be very useful for clearing space stations and built up areas.

The hovercraft are among my favourite GZG vehicles and this platoon is a rapid-reaction marine team able to deploy rapidly after making planetfall. I feel I am falling into a bit of a pattern with my platoons - 3-4 transports, a scout vehicle or two, and a heavier fire support vehicle (either a tank or up-gunned APC).  Mechs or some other unit is added to give some individuallity.
Posted by evilleMonkeigh at 00:21