My wife sweetly made pancakes to go with our morning game. However her sunny mood evaporated when she realised she was up against it - I won the initiative and moved quickly to position myself in the central building.

Her support units' reaction fire was ineffective. To add insult to injury, return fire from my SAS smashed into the building containing her sniper team. She bravely sprinted a squad across to ascertain their injuries, braving a hail of gunfire - but the heroics were in vain as both snipers were discovered to be dead.

A UNSC LMG team trying to break into the right-flank objective was shot down by the SAS scouts inside, leaving the objective secured an uncontested.

The UNSC were really up against it - as they prepared for a last-ditch assault I merged some of my more mangled SAS units and moved them to reinforce the central building, on which the hammer-blow must fall. The units on the flank objectives went on overwatch, laying down a crossfire on the central area.

The USNC charged.  Cos my wife is cute and she asked me  for the purposes of practicing the CQC rules, the overwatch units successful reaction rolls were ignored and her units tried to assault the central objective.  They took casualties and fell back.  At the same time, UNSC attacked the mosque on the left, but also failed to breach the building, taking heavy casualties from defensive fire.

With all but 2 UNSC units combat ineffective, and SAS in control of all 3 of the UNSC hotspots/objectives, my wife demanded another game where she had vastly superior forces gracefully conceded. 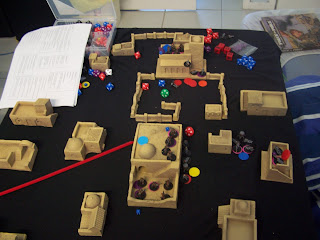 Even without advanced stuff and add-ons, the FoF rules are fun. A few thoughts for those new to the game:

+ They flow logically and tend to follow 'common sense'

+ Real world tactics work. Overwatch, co-ordinating your units, and wise use of cover is essential.

+ The reaction/activation sequence is excellent, making decision-making not min-maxing the 'core' of the rules

+ Both sides are continually involved, Infinity-style

- Lots of sub rules and exceptions. Sometimes the rulebook reads like a bunch of house rules thrown together. They have a quickplay sheet but I ended up making my own more comprehensive one with references to the rule pages.

Overall, this game is a excellent rules set (IMO the best platoon-level modern game) with a few minor quibbles.

The JR Minis terrain were excellent, even simply spraypainted. I will definitely be back for their next "free P&P" Christmas special.
Posted by evilleMonkeigh at 19:14