It is full of interesting articles in the 2300AD hard-sci fi universe.  Amongst them was an article on a fictious Walrus sub-fighter, which dogfights underwater. My imagination fired, I cruised the web to judge the feasibility of this type of craft. Given the density and drag of water, is it possible for submarines to travel over the usual 30-40 knots (about 60-80 kph) dictated by the laws of physics?  I found the answer was a resounding yes - supercavitation allows supersonic underwater speeds. 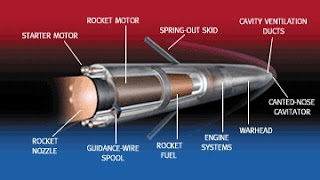 The Scientific American has some interesting info which I have condensed:

SUPERCAVITATION NOW
Already used by the Russian Shkval torpedo, supercaviation uses the specially-shaped nose cone of the ship/missile and gases from the engine to create a 'bubble' that torpedo 'flies' in – reducing water drag and effectively 'flying underwater.'
The torpedo could top 200 knots (with a variant that could apparently do 300 knots) powered by a liquid fueled rocket, to a range of 7000 to 13,000m. Unguided, it cannot maneuver.
The Shkval is nuclear-tipped, and if ambushed by a stealthier US sub, a Russian could fire in response, forcing the US sub to disengage and cut the guidance wires to their own torpedoes, as a kind of 'engagement breaker/get out of jail free card'. It has no known countermeasures.There are rumours the Shkval was involved in the Kursk disaster.

SUPERCAVITATING BULLETS
These seem to be primarily in the 20mm or 30mm calibre range.The USN RAMICs is currently being developed to rapidly clear mines (heliborne) and as a point defence against torpedoes (for ships). AHSUM is intended to be an underwater, sonar-guided Phalanx that can be used from ship or submarine hulls, to defend against torpedoes. I suspect it could also give hovering ASW choppers a nasty shock.

PROPULSION & HANDLING
Supercavitating craft have the potential to be very agile; expanding and contracting the "bubble" allows rapid acceleration and braking through manipulating drag.
Fins or wings that interact with or pierce the "bubble" – and thrust vectoring using the engine exhaust, furthering the 'underwater fighter jet' comparison.
Propulsion is an issue – conventional rockets have limited range "tens of kilometres" and decrease in performance as depth increases.
Gas turbines and jet propulsion systems burning metal fuel such as magnesium, aluminium or lithium seem the best bet.
Propellor screws ("turboprops") also have the potential to boost performance by 20-100%. 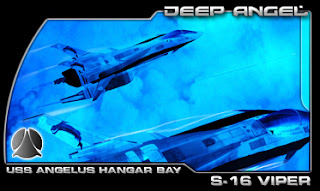 This fighter is from the sci fi universe of supercav.
SUBFIGHTERS
Potentially, noisy, fast agile sub-fighters, launched from sub "carriers" could transform underwater combat from cat-and-mouse stalking into underwater dogfights.  The noisy subfighters would be easily detected but impossible to engage with conventional non-supercav weapons.

PS: There is a fun fictional look at an underwater universe with supercav craft -  Empire Oceans Arise.
There is also an anime called Blue Submarine No.6 which has some fighter-sub sequences.