Another project I dug out this weekend.  Inspired by Area 88, Yukikaze, and the graphic novel Titanium Rain* I bough a selection of 1970s aircraft a few months back.


A scene from the strange, rather incomprehensible anime Yukikaze. It had a few cool dogfights though.
I went for 1970s as the aircraft are still quirky and varied, although not as much so as my favourite aerial period, the 1945-1955 period where we had planes like the Vampire and MiG-9.  Also missiles are not as impossibly lethal as they are supposedly today, where 'teh best radarz wins'.

I was initially a little disappointed with the 1/600 planes. They look OK on the table (and they scale well) but they are pretty bland and impossible to detail.  I thought I would paint up some of the 100 or so I have before abandoning them for 1/300 scale. 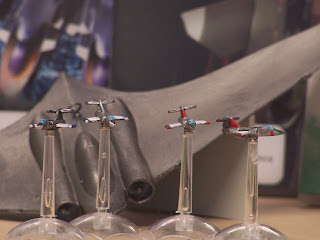 Here are some F-104 Starfighters. Behind is a very rough Ho229 in 1/76 I bought from a cheapo Chinese website for $8.  The bits didn't even fit together and as you can see it is rather a mess.  The aim is it is to serve as a gigantic aerial fortress/mothership like in Skycrawlers.


Skycrawlers has some great pulp WW2 action but a very long tedious philosophical story. All the best bits are on Utube - don't waste your time on the movie.
I am aiming for an Area 88 vibe - mercenary pilots battling a faceless foe in some desert kingdom. Mixed aircraft, with F-8s flying alongside A-4s, Mirages, Phantoms and MiG-21s. I even have some campaign rules (called Mercenary Air Squadron) which I got off Wargamesvault.  They look rather good, too and can be played independently of the miniatures game.

For tactical combat the C21 Air War rules are the simplest I can find that still have some crunch.  The rest seem hyper-real and designed for 1 v 1 duels, not the squadron sized engagements I envision. Or are simply guessing games, Wings of War style *cough* Check Your Six *cough*.


There is a huge battle on Area 88 which I can't find.  Here's a small clip from the start of the series.
Anyhow, I just found a bunch of unpainted EM4 starfighters and a random packet of MiG29s which have distracted me in my painting aims. Hmm - New Years resolution will be not to start anything I won't fini

(*A great comic, but a qualifier: the artist drew himself as the main character, a piece of self-opinionated douchebaggery that beggars belief)
Posted by evilleMonkeigh at 05:24