TERRAIN
This was a good test for the foam terrain.  The lift-out floors were appreciated and multiple doorways gave interesting choices.  In future I'm doing more buildings with multiple entries (3+ doors), but with LoS within the building blocked from entrance to entrance.  I'm keeping all my terrain to 2-story as different levels lead to over-generous firing lanes.

GAMEPLAY
It was only 3 v 3 as we were waiting for others to arrive to play Warmachine (yeah, I know...). I setup with a Naga sniper, a Deva and a Dasyu.  My opponent had a Vet. Kazak, Tankhunter (HMG), and a Sniper scout.

He immediately set up his sniper on a balcony overlooking the central courtyard and his other two together out of LoS.  With no template weapons, I grouped all mine behind a large building.

The Ariadnan scout sniper was blocking the right flank so I moved my (superior) sniper to engage.  Sadly my Naga moved too far out to claim cover, and was promptly hit with a critical. *Boom* headshot.  I moved my Dasyu through the building and took a shot at his Vet. Kazak, pinging two shots off his armour and forcing him back into cover. The Ariadnan armour saving the day,  setting the tone for the rest of the game. 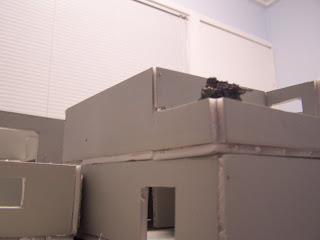 From this balcony the Ariadnan sniper controlled most of the courtyard and put a real hamper on my movements.


The Ariadnans responded to my advance by setting up a HMG overwatch on the left flank and moving the Vet. Kazak into a central building.

On the other side of the building, my Dasyu hugged cover out of LoS of the deadly sniper. The Deva cheerleader prepared for a dash across the open ground where my sniper had met her fate, hoping for a flanking move to get into the sniper's building.

The Vet. Kazak moved through the buidling to engage my Dasyu,and was promptly shot with another critical.  The Deva sprinted across open ground, avoiding a sniper shot, and began flanking the right sided buildings, headed for the sniper nest.

The Tankhunter moved to engaged the Dasyu, who was in cover.  In the ensuing firefight the Tankhunter took two hits which he successfully resisted, falling back.  The HMGer retreated into the building to support the sniper, just as the Deva was entering the bottom floor from the other side, intent on murder.

The Dasyu peeked around the corner and engaged the sniper from close range. Both fired from cover, which saved the sniper as two shots rattled off his armour and pinged into the balustrade.   Then - disaster! The Deva ran into the room with the Tankhunter, where her more mobile weapon favoured her, but fell dead, victim to another lucky critical. I felt really unlucky here.

The sniper and the Dasyu exchanged another round of fire, with the Dasyu getting the better of it, but being unable to damage his foe, who cowered back in cover behind the balcony balustrade.

It was with a sense of inevitability that the Tankhunter came back through the doorway to engage the Dasyu, who failed his first reaction roll of the game, to receive two shots through the chest.

The Tankhunter made 6 armour saves, the Scout 4 and the Kazak Vet. 2. With 2 kills to all the armour saves (and passed all WIP rolls) the Tankhunter was undoubtedly the star of the show.  My standout was the Dasyu who won 8 opposing rolls, garnering only one kill.

I feel apart from my stupidity getting my Naga killed at the start of the game, my tactics were sound, with a sequence of phenomenal armour rolls by my opponent making him nigh-immortal.

I still need more buildings - and I'll be starting to paint and tidy up the ones I have as I feel they worked well for this test run. The foam is rather light and tends to be bumped easily but otherwise works well.
Posted by evilleMonkeigh at 02:24