I am wanting some airborne carriers to go with my jets, to serve as a home base and an objective to attack. 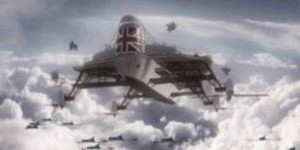 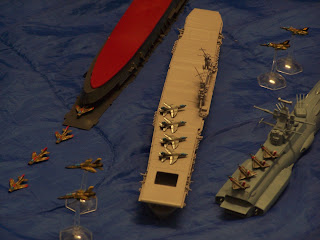 1/700 WW2 carriers and a sci fi carrier alongside Tumbling Dice jets - Egyptian MiG-19, F-105 Wild Weasels (painted by wife), USN A-7s and Mirage IIIs in Israeli/French paint schemes.  IAF Neshers are in the background.
I got a 1/700 carrier (Shikoku) which I am thinking of turning upside down, to give it more of a Last Exile feelwith hangar decks front and aft low down; or I could use my assembled Yorktown 1/700 flat-top with some plumbing fittings or LEGO rotors in a more traditional flying-carrier look.

My other option is a space kit.  This Space Battleship Yamato from Hobbylink Japan is a reasonable shape but, like the carriers, too small scale-wise. 1/700 is definitely petite compared to TD's rather bulky 1/600s. 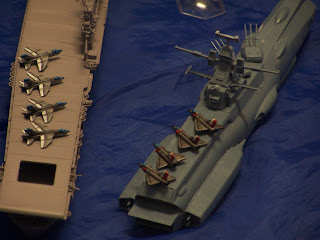 As you can see, the A-7s and Mirages would have a tight squeeze on board their respective carriers - that's why flipping the carrier to hide any obvious size issues might be handy.
A helpful TMPer pointed out a fantastic job on a similar project at the SteelonSand blog. He did the 'flip it over' thing and had a lot of success. It looks great - very inspiring!

The best one I've seen is this - I have no idea where/who came up with this - I'd love to find out! 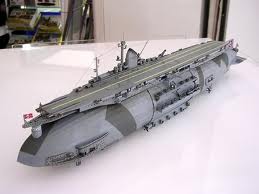 I'm not 100% sure an airship like this would work for my purposes though - I'd like an all-rounder that could be used for 1930s pulp as well as my 1960s sci fi 'Riftworld' project.

I also have a new idea - a Weird War 2 game where P-80s, Vampires and Meteors and MiG-9s battle Me 262s and weird German what-ifs.  Perhaps in flying carriers, over the secret Nazi Antarctic base - or in space, fighting on the dark side of the moon with specially modified jets!
Posted by evilleMonkeigh at 08:39