There is lots of good info on the Lead Adventure forums, where I got this pic:  LEF 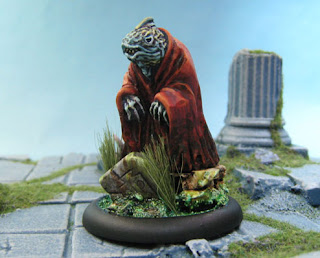 I'm not going to review the ruleset - it has already been done well here: Anatoli's Game Room

Itt seems like it was a rulebook made by a gamer, for gamers. It has some bells and whistles, but is far more practical in layout and design than many of the beautiful-but-impractical-to-use rulebooks *cough Malifaux Infinity cough*.

CO OPERATIVE YET COMPETITIVE
What interests me is the co-operative-yet-competitive aspect to the game. BOTH players control teams of secret service agents, but neither side fights each other directly.  Each player takes turns controlling the lurkers/monsters/cultists.
#1.   Since one player is not actually playing his own team but the joint-enemy monsters, there is no direct competition between player armies (or rather, skirmish 'teams') taking much competitiveness out of the game.

The player whose turn it is to be the cultits gets to match his opponents' points in monsters.  So as your warband grows, it faces more powerful monsters to match it.  If your warband is weak, it faces weak opposition.

#2. All stats, weapons and abilties are valued.  Min-maxing equipment, wildly unbalanced warband matchups a la Mordhiem are unlikely due to the 'monster'  player receiving matching points.

I notice co-op/rpg style boardgames are becoming popular (usually all-players vs a GM) with FFG's Descent: Jouney's Into Dark in particular standing out. People often say "scenario games are better than points-driven army list games" but perhaps that is the wrong question. A better one might be

"Co operative or Competitive ?"
Strange Aeons asks the question - can't we do both?
Posted by evilleMonkeigh at 01:09