I must say Blue Moon intrigue me.  GZG are the established old school, and Khurasan and Rebel are the vibrant new kids on the block.  Critical Mass Games and others such as Blue Moon tend to fly below the radar amongst the plethora of 15mm releases from the 'big guns.'

The 15mm Plunge shows some nicely plained Vleta Reavers such as these: 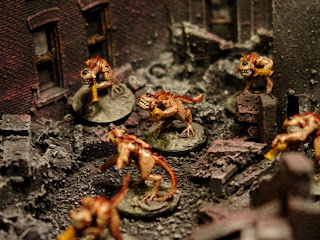 Too often we have 'Star Trek' aliens - basically humans with rubber masks - and I feel we don't have enough 'inhuman' aliens with guns, and these cyclops-meets-termagaunts fit the bill. I do like the Gears of War locusts and whilst I might not get my wish in 15mm, minis ARE forthcoming.

There are some good photos on 4 Colour Figures and the Aquans will be useful to go with 15mm.co.uk  Octo-priests and Khurasan Karks and lampreys for an undersea-themed force.

The other to catch my eye are the not-Dark Elf "Shivan Sisterhood".  . Although not terribly original, the hot-chicks-with-spiky-bitz is not a bad cliche to have. A 28mm 40k Ravager would be an awesome assault ship for them and would be an impressively-sized battle barge in 15mm. 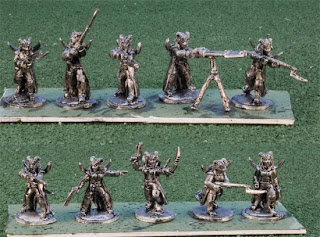 The third Blue Moon line of interest is their "Orion Marines". My favourite paintjob is the MaK inspired theme by TinySolitarySoldiers, an example of which is below: 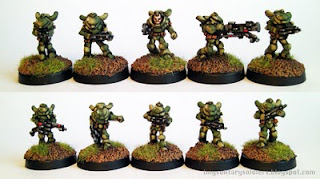 His purple Twanax werewolf aliens are also rather good.

I think the other Blue Moon lines are a little 'rough' or cartoony compared to the 15mm 'benchmark' manufacturers. John Leahy has painted squads for sale on his website which give a good feel for the other forces.